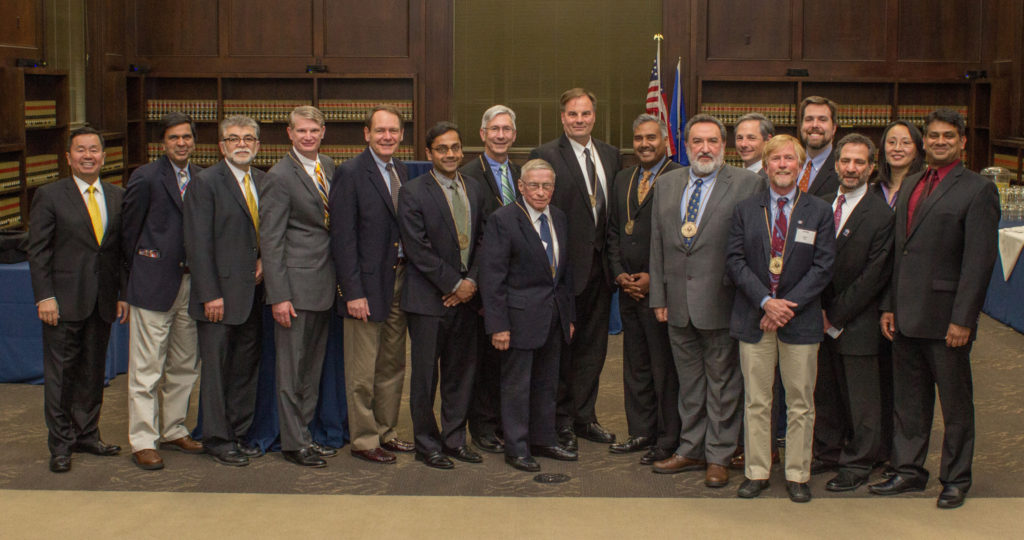 Each year, the School of Engineering honors exceptional engineering alumni and friends who have helped us in countless ways.

The UConn Academy of Distinguished Engineers, founded in 2003, honors School of Engineering alumni or friends whose careers are characterized by their sustained and exemplary contributions to the engineering profession through research, practice, education, policy or service. Members are individuals who bring enduring honor to the community as practitioners and as citizens.

Below are the 2016 inductees. The previous years’ inductees to the academy can be found here.

As President at Pyramid, Mr. Augustyn is responsible for the company’s strategic direction, the implementation of new products and developing a strong management team. He is currently the President of the Board of Directors at the Community Foundation of Central Connecticut and has served for several years on the Executive Board of the Meriden YMCA.

Kenneth B. Bowes is the Vice President for Connecticut Engineering at Eversource Energy, where he is responsible for all of the engineering activities for the electric distribution system. Mr. Bowes establishes the reliability, asset management and system resiliency strategies for the annual program development and the five year capital program.

He has received the Water Environment Research Foundation’s Paul L. Busch Award, the National Science Foundation CAREER Award, and is a Fellow of the National Academy of Science.

William D’Agostino earned his B.S. in both Chemical Engineering and Materials Engineering from the University of Connecticut (1984) and holds an MBA awarded with Highest Honors from the University of Dallas. He the Senior Vice President of Operations at InVivo Therapeutics in Cambridge, MA. He is also a co-author of the book Regulatory Strategies for Combination Products.

Chris Ecsedy earned his B.S. (1988) in Civil Engineering and his M.S. in Civil and Environmental Engineering (1990) from the University of Connecticut.

He is the Senior Vice President of Energy and Facilities at Fuss & O’Neill, where he has worked for the past 24 years. He has extensive experience in environmental engineering, industrial wastewater management, and industrial waste management. Mr. Ecsedy oversees a team of structural, mechanical, electrical, and environmental engineers who work on a diverse range of complex projects.

In addition to his work at Fuss & O’Neill, Mr. Ecsedy has served on the Connecticut Business and Industry Association’s Environmental Policies Council steering committee, providing guidance on environmental and energy issues that affect the area’s businesses and industries.

Andrew Hoffman earned his B.S. in Electrical and Systems Engineering from the University of Connecticut (1953), as well as his M.S. in Management Science from the Hartford Graduate Center (1983), now the Rensselaer at Hartford. After graduation, he worked at United Technology Corporation for 34 years, eventually becoming the Executive Vice President of the Hamilton Standard Aerospace division.

At Hamilton Standard, Mr. Hoffman was involved in a variety of programs related to the United States Space Program. He was one of the engineers responsible for helping the Apollo 13 crew return home after a liquid oxygen tank exploded, which knocked out the life-support systems to the command module.

Mr. Hoffman was also named to the International Academy of Astronautics Committee on EVA Protocols and Operations.

Dr. Schneiter co-founded Veratag in 2006 and GlobalSpec in 1996. He was president of GlobalSpec, a vertical search engine for engineers, for 10 years. Under his leadership GlobalSpec was named in the “25 Companies to Watch” list by Cahners.

In 2008 Dr. Schneiter received the Tech Valley Entrepreneur of the Year award for his work in GlobalSpec, Veratag, and the many early stage technology companies he has helped with guidance and advice. He holds eighteen patents.

He has served on review boards of the National Academy of Sciences (NSF) in the areas of nuclear waste management and directing the future of hydrologic science research at the NSF.

Konstantinos G. Zografos earned his M.S. in Transportation Engineering (1983) and his Ph.D. in Urban and Transportation Engineering (1986) from the University of Connecticut. He is Chair Professor, Director of Research, and Director of the Centre of Transport and Logistics at the Department of Management Science of Lancaster University in the United Kingdom.

Dr. Zografos received an ENO Foundation for Transportation Fellowship in 1986, the President’s Medal of the British Operational Research Society in 2005, and the INFORMS Edelman Laureate Honorary Medal in 2008.