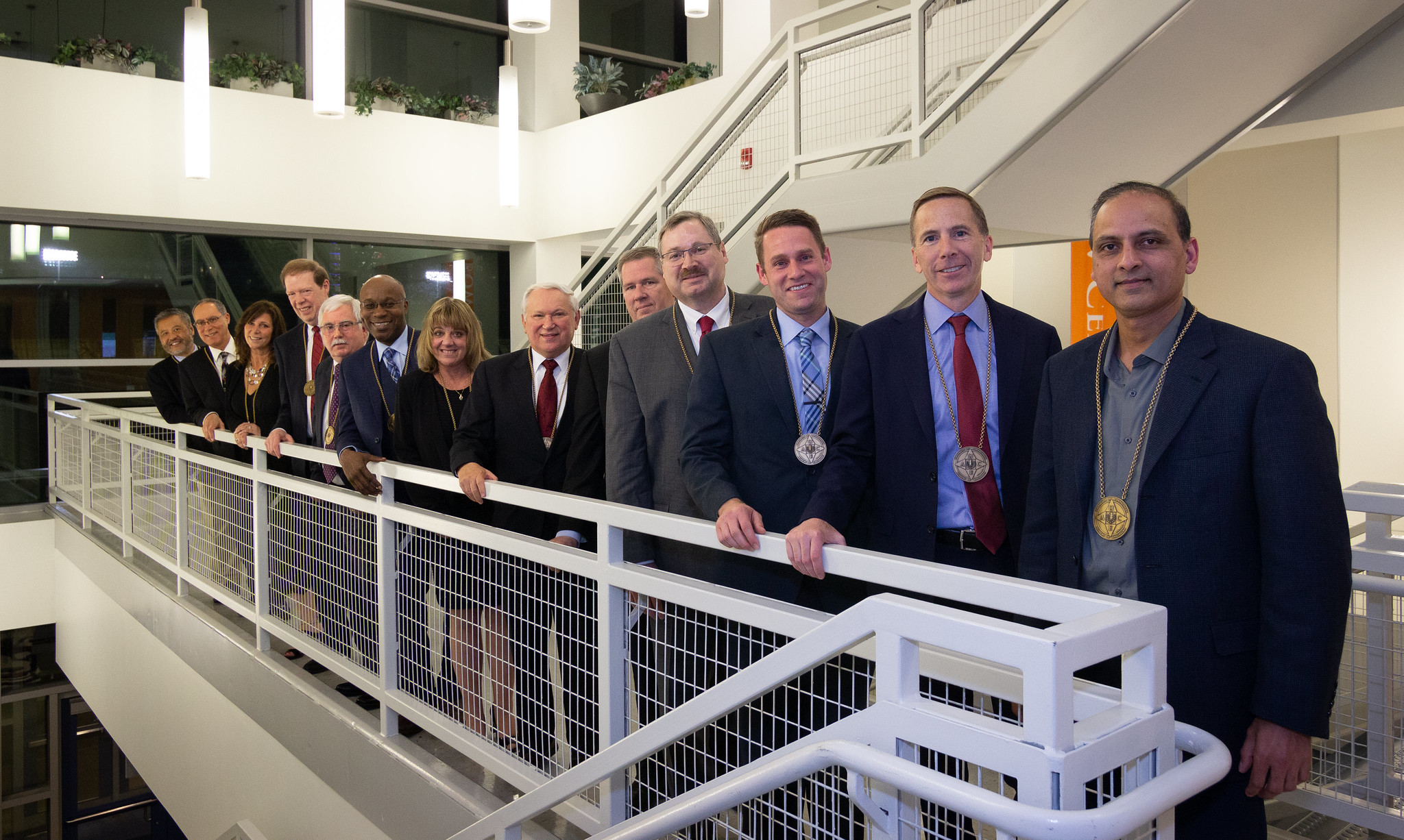 All thirteen 2019 UConn Academy of Distinguished Engineers pose for a photo in the Student Union after the event. (Christopher Larosa/UConn Photo)

Flanked by former professors, close family and friends, and members of the engineering community, 13 accomplished engineers took to the stage for their formal induction into the University of Connecticut Academy of Distinguished Engineers.

The Academy, which has inducted 236 total members since its inception in 2003, honors School of Engineering alumni and Connecticut engineers whose careers have been characterized by their sustained and exemplary contributions to the engineering profession through research, practice, education, policy or service. Members are individuals who bring enduring honor to their alma mater as practitioners and as citizens.

This year, the inductees hailed from academia, aerospace, and even included an administrative patent judge for the U.S. Patent and Trademark Office.

That judge, the Honorable Jean R. Homere, who graduated with a B.S. in electrical engineering in 1993, said during his induction speech that he was initially cast aside as a child and labeled a “slow learner”:

“As a child growing up in Haiti, I had very little interests, and was cast aside as a slow learner, until my elementary school teacher and my cousin found out that my performance was due to lack of guidance and structure in my life,” Homere said. “They took me under their wings and taught me that with hard work and discipline, there is nothing that I couldn’t achieve.”

A similar path was experienced by another inductee, GE Appliances President and CEO Kevin Nolan, who said that he dreamed of coming to UConn and getting a degree in engineering, but wasn’t the best student:

“When I first applied to UConn, I didn’t get in. But, I actually give credit to UConn, because I don’t think I would have let myself in either,” Nolan said. “When I eventually transferred here, it felt like home, and it was the first place where people had faith that I could be a good student.”

In addition to Nolan and Homere, 11 other inductees shared their stories of highs and lows. Those 13 inductees to the 2019 Academy class are as follows:

–Edgar B. Sweet ’80, Director of Regulatory Compliance and Integrity at Novara GeoSolutions and the CHA Group of Companies.

For more information on our Academy of Distinguished Engineers, please visit: https://www.engr.uconn.edu/academy-profile/.