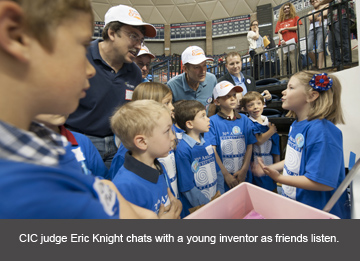 Excitement, energy and pride were abundant as the children – accompanied by parents and teachers –came to campus to unveil, before teams of evaluators, the inventions they brainstormed, documented and built. These were the students selected at school competitions to represent their schools and peers.

In celebration of the program’s 30th anniversary, the founders were recognized, special honors awarded, and speakers addressed the assembly.  Among the most memorable remarks were those of Interim Dean of Engineering, Dr. Kazem Kazerounian, who described a recent visit with his brothers, both deaf, during which he attempted to explain the purpose of the Connecticut Invention Convention.  As he struggled to describe “inventor,” one of his siblings finally understood and offered the proper sign. Placing the tip of a thumb against the forehead, with fingers aligned vertically, one launches the hand skyward with fingers outstretched to signify “from my mind to the world,” he explained. The sign was quickly adopted by hundreds in the audience and repeated as a salute seen throughout the day.

Another poignant moment came with a special award presented to teacher Thomas Doyle, who has mentored young inventors in two different schools across 2 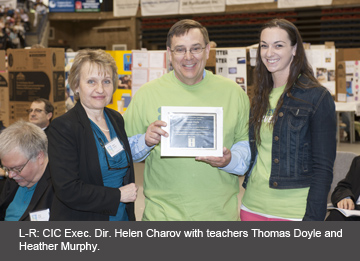 7 years.  The award was presented by Polk Elementary teacher Heather Murphy who, as a grade 3-4 student, was mentored by Mr. Doyle as her CIC leader.

“He is definitely the one who inspired me to lead the invention convention at my school. I have such fond memories of being a part of it, that I wanted the students at my school now to have the opportunity to create memories like that of their own.  To dedicate 27 years to the Invention Convention is so inspiring. I hope that I can make an impact on my students the way he made an impact on me.”

Heather recalls her first invention demonstrated at CIC was the “homework wheel,” a small wheel made from a fastener and two circles, one of which offered the options, Take Home or Leave at School.  She explains the wheel could be attached to notebooks or textbooks throughout the school day to help a student quickly decide which items needed to be transported home to avoid missed homework.

Veteran CIC leader Tom Doyle currently teaches at the Judson School, which serves grades 3-5. He notes that the award was completely unexpected, and he deemed it “really fantastic” to be recognized for his long-standing commitment to the CIC learning program.

He expressed great appreciation to Heather, saying “I am so grateful and appreciative to Heather for her kind sentiments in terms of her experience as a student participating in the program at Baldwin School. Heather is an excellent young educator and I’m proud to have had such a positive influence on her that she has made it her mission to keep the program alive at her school.”

“In the early years, the invention convention was much smaller; it has grown enormously over the 27 years I’ve been teaching it,” he says. “I’ve always tried to embrace all of the students who are interested in participating, not just the gifted/talented students. I think it’s a very good program; it gets away from the traditional curriculum, where there are correct answers, and lets kids use their creativity and think outside the box.”

Making the process exciting and fun, while imparting the lesson that the process of invention sometimes doesn’t go as planned, are important elements he strives to convey as a CIC leader at his school.  Tom remarks that he uses science games or occasionally dons a lab coat to portray a “wacky professor” to keep the students engaged.

Another teacher who has experienced the CIC in both roles is grade 5-6 science instructor Gina Burnham. As a sixth grader, she watched as her baby sister struggled to crawl across a hardwood floor and decided to solve the problem by designing toddler-sized pants outfitted with rubber on the knees (dubbed Kneekers), which she demonstrated at the state-wide convention.  From that point on, she was hooked. 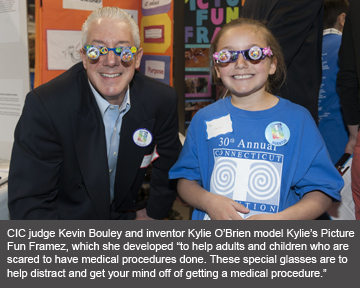 coordinates (with science enrichment teacher Carly Imhoff) the CIC program at Ashford School and reflects, “To me, this is what the Invention Convention is all about: children thinking about real problems that affect them, or that they see affecting others or the environment, and taking action. Being involved as a teacher now is a way to give other children an opportunity like I had.”

Heather agrees, noting, “As a teacher, I am inspired by the hands-on approach to the CIC curriculum. I like that students are encouraged to try new things and are taught that when something doesn’t work out, they should learn from the experience and consider ways to improve it on their next attempt. It also teaches a great lesson about perseverance. Most inventors have the experience that not everything is perfect on their first attempt, and they need to analyze what went wrong and how to possibly change it.”

Gina attended the 2013 CIC with a number of her students and notes that they confidently engaged the adult judges – including scientists, engineers and patent attorneys – in discussions about their inventions.

For her students, Gina reflects, “The struggle is part of the learning process: it gets children to look at the world around them in a critical way and to engineer something important to them. It goes beyond the kind of learning where you can arrive at the ‘correct’ answer and brings children to a place where they have to navigate through different solutions, analyze the feasibility and effectiveness, and test their design. The process is as important as the product.”

Looking back over his 27 years as a CIC leader, Tom recalls a number of memorable projects.  “I’m a diehard fisherman, and one student came up with a rod holder that could be attached to a belt. This invention freed up both hands, allowing the fisherman to untangle a stuck line or change bait using both hands.” Another invention, selected to proceed to the state-wide convention, was developed by a student with a learning disability. Her invention was a special cover placed over containers of fruit to reduce over-ripening and spoilage. “The experience of developing her invention, then demonstrating and explaining it before peers and judges, really gave her a lot more confidence, even in the regular classroom,” he notes.