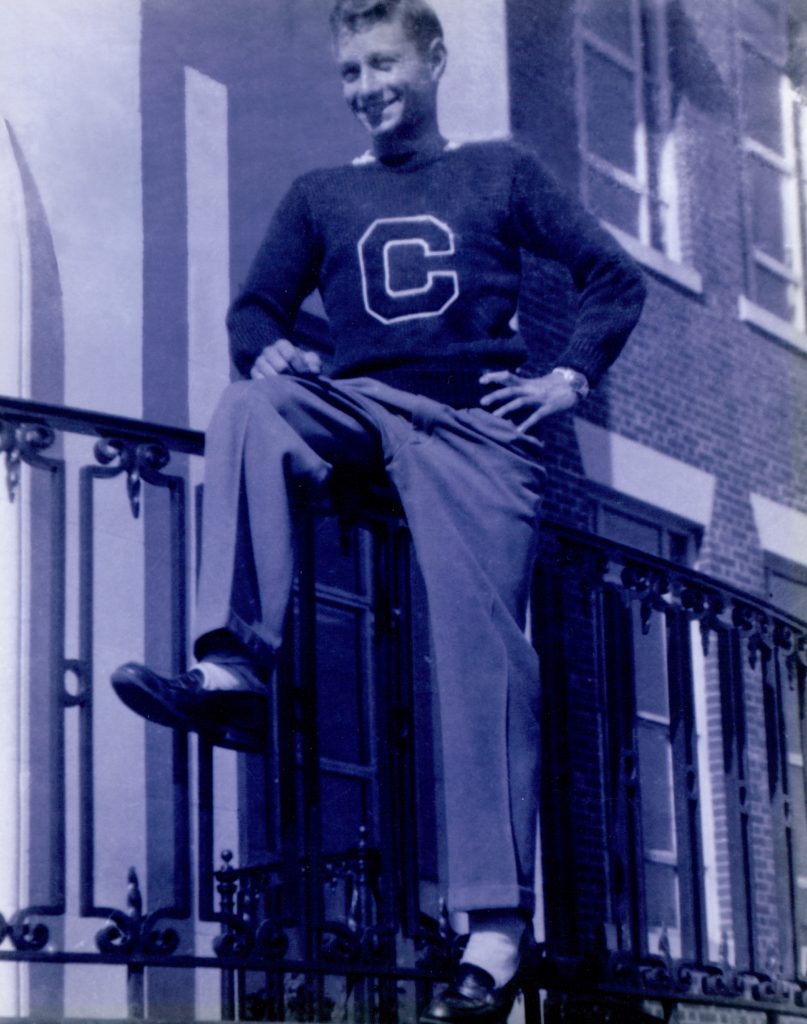 As we celebrate 100 years of engineering at UConn, we’d like to share the stories of alumni who have made the school great.

Seventy years ago, a self-described naïve young runner from Newtown, Connecticut came to school with a Ford Model A Blue Beetle and a slipstick or slide rule to pursue his lifelong dream of becoming an engineer. His impressive record as a high school track star assured Jim Bowen a spot at Storrs where he quickly learned that Dr. Timoshenko, the humorless department head of electrical engineering, “hated” athletes; he also didn’t care much for women. Bowen was careful to never wear his varsity letter to class, sneaking onto the stairs of Castleman on a Saturday to have his photo taken sporting his sweater.

After graduating from UConn in 1950, Bowen joined a consulting firm in New York City. He began attending Columbia University at night, and was promptly drafted for the Korean War.  Misclassified by an interviewer as a locomotive engineer, he was assigned to a transportation corps in Virginia where they insisted that he operate a train. Fortunately, as he was an hour away from being shiped out to Korea, the failed train driver found his way to an R&D group where he spent his remaining service working on power for a secret project.

After being discharged, Bowen started his career. He earned a master’s degree at the University of Delaware’s evening program, married Carolyn, had four children in four years, moved back to Connecticut and ran a Raytheon company. In 1968, he moved to Southern California because he was “attracted by (the) weather and other things.” For a few years, Bowen ran a few small companies in Southern California before receiving an offer in 1972 to join Fairchild Camera and Instrument in the nascent heart of Silicon Valley. As Corporate Vice President, Bowen ran four companies in the Fairchild semiconductor equipment business. He was the driving force behind several trailblazing ventures.

Under Bowen’s direction in the 1970s, Fairchild Test Systems became the number one producer of Automated Test Equipment (ATE) worldwide. ATE quickly confirms whether devices work and detects defects, saving manufacturing costs and preventing faulty devices from reaching market. For his contributions and leadership in the ATE industry, he received the prestigious 2016 SEMI Sales and Marketing Excellence Award.  His efforts facilitated development of early product marketing and sales methods that broke the $1 million barrier for semiconductor equipment prices. Bowen was honored during January ceremonies at the SEMI Industry Strategy Symposium in Half Moon Bay, California.

In preparing his acceptance speech for an audience of 500 guests, Bowen asked his wife of 63 years, “In your wildest dreams, did you ever think that I would receive this award?”  Carolyn deadpanned, “You were never in my wildest dreams.”  Retired and living at a summit on the Pacific Coastal Range in bucolic Los Gatos, California, Bowen fondly describes his time at Storrs as classic and says he had a wonderful time. It was “hard running indoor and outdoor track and attending engineering school.”  If he had it all to do again, he says that he would have stretched his undergraduate coursework over five years, because he “had to stay up half the night [studying].”

Jim and Carolyn Bowen wish to come back to Storrs for a visit, perhaps the UConn engineering centennial Gadget Gurus Gala in November.  This time, he can have his picture taken on the steps of Castleman wearing his letter sweater – regardless of the day of week.