A Commencement Speech from Space

It’s not unusual for commencement speakers to share their unique perspective on life with members of a graduating class.

But NASA astronaut Rick Mastracchio ’82 (ENG) may have topped them all Saturday when he spoke to the School of Engineering’s 2014 graduating class while floating – upside down – inside the International Space Station 260 miles above the Earth. 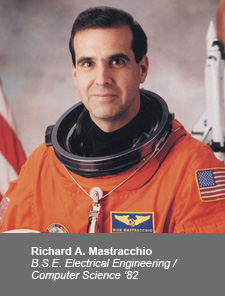 “I was trying to figure out how to make this speech different than all the other commencement addresses that are given each year,” Mastracchio said at the start of his pre-recorded videotaped keynote address. “And then I realized, I’m in a weightless environment. So maybe I should give the speech in a different orientation.”

And with that, Mastracchio, flanked by two empty astronaut spacesuits, rotated counterclockwise and briefly continued speaking while inverted.

It was a moment the approximately 400 engineering graduates will likely remember for some time.

“It’s incredibly cool,” said Rose Cersonsky, a materials science and engineering major and the designated student speaker for the ceremony. “I think it really speaks to the technology today and the caliber of UConn students.”

As an engineer, Cersonsky said she was intrigued by all the different elements that had to fall into place to incorporate Mastracchio’s remarks into the program remotely.

“It was only 50 years ago that a simple thunderstorm could interrupt a long-distance conversation,” Cersonsky said. “Now, an astronaut can speak to us from 250 miles above the Earth.”

Engineering graduate Gregory Reinhold, a computer science & engineering major, said he too was excited that Mastracchio was tapped to be this year’s keynote speaker.

“It’s such a unique experience,” Reinhold said. “It’s rare to get a chance to hear someone speaking from space. It’s exciting that he chose to speak at our graduation. It isn’t often an alum speaks at Commencement who has received so much national recognition.”

Mastracchio’s six-and-a-half minute speech was broadcast on the Gampel Pavilion scoreboards to about 5,000 graduates, their families, and friends in attendance. His wife, Candi, accepted an honorary degree on her husband’s behalf during the ceremony.

A UConn alum who has made four trips to outer space, Mastracchio is one of nine distinguished individuals receiving honorary degrees from the University this year. He has been living and working aboard the ISS since November 2013, and is scheduled to return to Earth May 14.

A Waterbury, Conn. native, Mastracchio graduated from UConn with a bachelor’s degree in electrical engineering and computer engineering. After beginning his career with Hamilton Standard (now UTC Aerospace Systems), he transferred to Houston, where he applied his engineering knowledge supporting 17 NASA missions as a flight controller. He was accepted into the astronaut corps in 1996.

On Saturday, Mastracchio said he probably has “the best job on – and off – the planet.”

He noted that he first applied to become an astronaut following the space shuttle Challenger accident in 1986. He continued sending in applications over the next nine years before finally being accepted into the nation’s elite space program. The importance of perseverance and hard work was the main theme of his keynote address.

“I wasn’t just sending in an application and crossing my fingers,” Mastracchio told the graduates. “I was working on things to improve my chances. I went to the University of Houston at night to get a second master’s degree. On weekends, I trained for and received my pilot’s license. I worked hard to build up a good reputation at the Johnson Space Center.

“You become an astronaut the same way you accomplish any goal – through hard work and perseverance,” added Mastracchio, who lived in East and North campus residence halls during his time at UConn. “Everyone has goals, dreams, and wishes, but not everybody wants to do the daily work it takes to reach their goals… You achieve big things not with one big step but with many small steps. You didn’t complete college in one day. It took you working hard almost daily for four or five years. Other big goals and accomplishments will probably take a similar level of work and effort.”

Mastracchio said he’s come to realize that the difference between those who become astronauts – those who achieve their goals – and those who don’t is the ability to work toward their goals on a day-to-day basis.

“You have shown that ability,” he told the graduates. “You have succeeded in graduating from the University of Connecticut School of Engineering. Let me tell you and let me tell your parents, your family, your friends – that is not easy… I know you’ve worked hard to get to this point and now you know: You know how to achieve a major goal. You know how to work hard. You know that you can succeed at difficult tasks. That same work ethic and perseverance that got you to this point can take you a long way. It is up to you on which direction you go and how far you take yourself.”

Mastracchio said he could never have imagined as a UConn student that his rigorous studies and training would someday lead him into space, where he helped build the International Space Station during early space shuttle missions. He has logged more than 51 hours of spacewalks, including two unplanned spacewalks during his current mission to replace a faulty computer unit and repair a vital cooling system.

“So remember, that all of those small steps and all of that hard work can take you a long, long way,” Mastracchio said in closing. “Let me finish up by saying to the parents, families, and friends of the graduates, I know you are proud of your graduate but you should also be impressed by their accomplishment. And to the graduates, let me say that it is great to work hard. But remember, your family is very important. And remember to also have some fun along the way – I know I do.”

And with that, Mastracchio donned a UConn baseball cap and signed off, but not before rotating once more and smiling down on the graduates from his weightless, upside down inversion.