A New Use for Old Carpet

Nearly 4 billion pounds of carpet are discarded every year in the U.S. Now, researchers from the UConn School of Engineering and School of Business are working together to figure out a way to make good use of all that waste.

As part of a project funded with a $435,000 grant from Carpet America Recovery Effort (CARE), Richard Parnas has developed a process for converting old carpet into new particle board. It’s a solution that would reduce the amount of waste in landfills and help decrease deforestation. 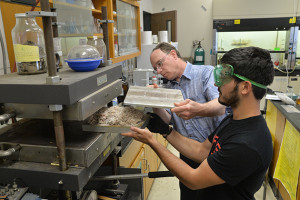 Daniel Kloyzner ‘16 with Richard Parnas, a professor of chemical, materials, and biomolecular engineering, has found a way to turn particle board into carpet. (Sean Flynn/UConn Photo)

Finding a use for all that wasted carpet has confounded researchers for years. There have been efforts to break down discarded carpet so that it could be used as plastics or other materials. “But it’s really expensive and difficult,” says Parnas, a professor in the Department of Chemical & Biomolecular Engineering.

Turning the material into fuels has also proved tricky. Processes such as pyrolysis – a treatment that chemically decomposes organic materials by heat in the absence of oxygen – and gasification work well when you have clean material, Parnas says. “But when you have ‘post-consumer carpet’ that’s been stepped on, with dirt ground into it for 20 years or so, dirt contaminates the process and makes the chemical reactions not work so well. It contaminates the final products.”

But turning it into particle board doesn’t require such elaborate preparation. Getting the process right, however, took a few tries.

CARE, an organization formed in 2002 by the carpet industry and various government agencies, sent a few crates of discarded carpet to UConn.

“We messed with it and compression-molded it,” says Parnas, “we made little sheets that you do mechanical testing on, and it wasn’t good enough.”

Certain levels of strength and stiffness are the two major criteria used to judge the quality of particle board. The first particle boards were strong enough to pass American construction industry standards, but failed the stiffness requirements.

Fortunately, Parnas was working on the recycling of certain types of biomass waste – mostly from discarded sugar cane and coconut shells – when he received a call from Timothy Dowding, a business professor at the Stamford campus.

“He basically called me up five years ago – out of the blue – I never heard of the guy,” Parnas recalls. “He said ‘I need you to invent a particle board out of bagasse [biomass waste from sugar cane] or coconut shell. There’s billions of pounds of this stuff laying around the tropical beaches of the world.’” 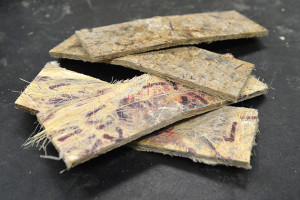 Particle boards made with a combination of sisal fiber (derived from agave) and carpet material. These boards were made for testing purposes; the researchers are still working on optimizing the formula.
(Sean Flynn/UConn Photo)

So with this work already underway, it was a natural step to combine the carpet with the biomass.

“We found out that when we combined the waste carpet with the biomass in certain ways, we could meet the stiffness requirements and the strength got even better,” he says. “The two materials interacted nicely. Basically the combination seems to work quite well.”

The project relies on a number of disciplines. George Bollas and Ioulia Valla of the chemical and biomolecular engineering department are testing the particle boards for flammability and toxicity.

A marketing analysis is the other major component of the project. Approximately $100,000 of the grant will be apportioned to the UConn School of Business to develop strategies for targeting these new products to the construction industry.

“MBA students will be assessing the market opportunity for these new products, and will help identify optimal target customers and develop a pricing- and distribution- strategy,” says Brian Brady, director of the Business School’s Stamford Learning Accelerator program. “We’re excited about the potential of patented particle board products incorporating post-consumer carpeting as one solution in aiding the sustainability efforts of CARE.”

Parnas has even bigger plans for the carpet-based particle board. Next year, he and others plan to set up a particle board factory in Haiti, with funds from outside investors. They plan to produce 50 million pounds of particle board, mostly for the European market. Once it’s up and running, he says, the operation will bring about 25,000 acres of sugar cane crops back into production.