A Promise Fulfilled: the Story of the Stern Family 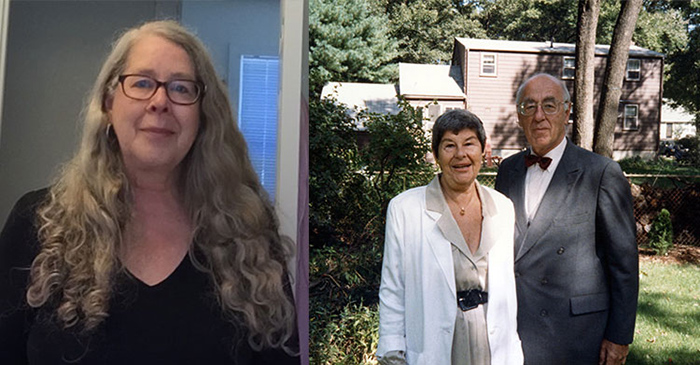 From one generation to the next – Linda Jo Stern ’77 (CAHNR) (left) completes a pledge her parents Claire and Joe (right) made in 2003.

Linda Jo Stern ’77 (CAHNR) always keeps a picture of her father on her desk. He’s in a dark suit, wearing a polka dot bowtie – his signature fashion statement – and is pensive.

Joe Stern ’44 (ENG) was the first in his family to attend college, graduating from UConn with a degree in electrical engineering. Upon graduation, he enjoyed an accomplished career in telecommunications. Joe worked for CBS for 25 years, helped design the transmitter on top of the Empire State Building, and developed five patents, including one that led to the creation of on-screen television guides.

“I think I followed in his footsteps,” said Linda Jo. “He was very grateful for being able to go to college. He always said very positive things about being at UConn. He was able to make an entire career out of [his degree]; it gave him the necessary tools.

“That’s basically what happened to me too.”

Linda Jo was not a traditional UConn student. She began her collegiate career at the University of Wisconsin but was unable to finish her degree. She lived and worked in Madison, Wisc., for five years and then moved to New York, where she worked and took pre-med courses at Columbia University.

“[These courses] urged me on even more to want to study,” she said. “I couldn’t figure out where I could go that I could afford. My father reminded me that he had had a great experience at UConn and that it had set him on his career path.”

At 24, she enrolled at the University, majoring in nutritional science with a concentration in community nutrition. She finished her degree in just two and a half years at the age of 26. She credits many people who helped her along the way, including Kirvin Knox, a former Dean of the School of Agriculture and Natural Resources.

“He told me about the program called University Year in Action, part of the VISTA program,” said Linda Jo. “You got credit for doing community service and you got a stipend. He recommended me for that and he also helped me get approval to take 20 credits a semester so that I could graduate sooner.”

Upon graduation, Linda Jo worked as a nutritionist in a community health center in Boston. She said her degree stood her in good stead for many years as she worked her way up to Assistant Director of the Women, Infants and Children Nutrition Program (WIC) in Massachusetts.

“I really owe a lot to UConn,” said Linda Jo. “They didn’t think I was odd for returning to college at 24. I had nothing but positive experiences at UConn from the get go.” 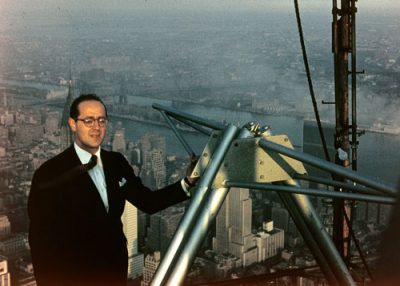 Up in the clouds atop the Empire State Building, Joe Stern ’44 (ENGR) stands next to the transmitter he helped design. Joe credited UConn with providing him the tools to have a successful career in telecommunications.

Thirteen years ago, in 2003, her father Joe and his wife Claire decided to give back to his alma mater. They wanted to fund a scholarship for the School of Engineering that would provide need-based support for female engineering students.

“It was a great combination of my mother’s interest in providing women with opportunities, and my dad getting his start at UConn and wanting to give something back,” she said.

Sadly, Joe passed away before the scholarship could be fully established.

“It was just sitting there, like a promise that had not been fulfilled,” said Linda Jo.

Just recently, Linda Jo’s mother died. Claire was a passionate community organizer with a concern for the environment. She founded her own company, Claire Stern Associates, and worked on behalf of communities that wanted to reduce detrimental environmental impacts. As part of her work, she began working alongside her husband.

“As cable television became more popular, cable lines were being installed with little regard for their impact on communities,” said Linda Jo. “Many towns and cities decided to establish regulations that a community assessment needed to be done. My mother would do the community assessments and the environmental impact statement, while my father would do the technical [part].”

Upon her mother’s passing, Linda Jo realized that she could complete the original pledge to the scholarship fund that had been made by her parents.

“To honor my father and to honor both of their intentions, I wanted to finish the pledge,” she said.

She has committed to doing just that and also updated the scholarship’s name to the Joe Stern Scholarship Fund.

“Neither my mother’s name, nor my name, needed to be on there,” explained Linda Jo. “He was the one who graduated from UConn and he was the engineer. He also gave us – as a family – the opportunity to learn about the world.”

Linda Jo has fond memories of her parents – from living in locations around the world including Argentina, Venezuela, and Europe; to watching her mother, Claire, earn her bachelor’s degree at the age of 65 and her master’s at 75 from New York University. She is proud to honor them with a scholarship that can help students follow their dreams.

“We usually make promises based on positive ideals, and if you can’t fulfill them, that’s understandable,” said Linda Jo. “I believe that there’s a quiet satisfaction that’s associated with fulfilling the ideal you set up. You’re going to give to something you cared about or your relative cared about. It’s good to try to make that happen because it feels really positive to make good on that commitment.

“It’s part of the paying forward that many folks talk about,” she added. “I feel like the most important thing is to try to help people. I think it’s our job as the older generation to help as best we can.”