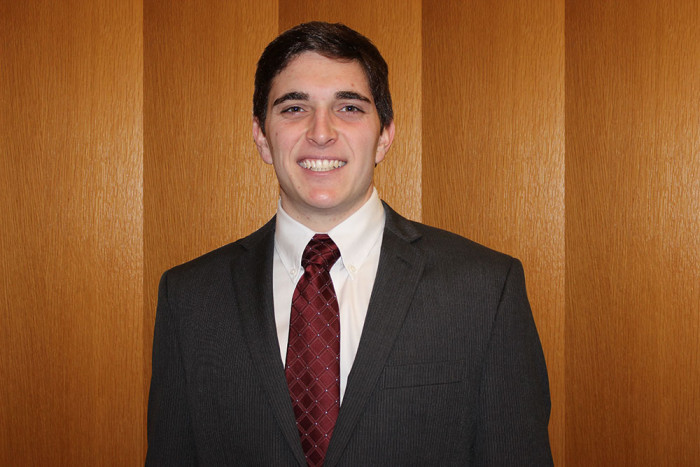 This article originally appeared on the material science and engineering website.

From marching on the UConn turf to community work in Israel, material science and engineering junior Aaron Gladstein stays busy.

Along with his extracurricular activities from the Material Advantage Club, UConn Marching Band, and Sigma Alpha Mu Fraternity, Aaron maintains academic excellence; under the guidance of his Honors Advisor Dr. Brian Huey, he has made the Dean’s list numerous times and was named the 2014 Babbidge Scholar, an award given to students who accomplish a 4.0 in both the Spring and Fall semesters of a calendar year.

When asked about his successes, Aaron emphasizes balance. “I have spent many hours cramming and reviewing course material, and I hold myself to very high standards. Despite all of this, I know when enough is enough and when to take breaks. I find staying relaxed and happy helps more than spending countless hours in the library.”

Currently, Aaron is working with a team in the material science and engineering Junior Design Lab to test various growing atmospheres and physical properties on a mushroom-based, all-natural packing material. Sold as kits by Ecovative Design, the insulating material can be grown by the consumer into whatever shape they desire, serving as a potential alternative to Styrofoam.

Among his engineering projects, the young scholar remains grounded through his passion for music. He began playing the trombone in elementary school and has continued this interest into college with the UConn Marching Band.

A collaborator both in and out of the lab, he says, “The band is the biggest team I have ever worked with, and it has given me the opportunity to continually hone my leadership and interpersonal skills, as well as countless exciting experiences. By being in the marching and pep bands, I have formed a better connection with UConn and take great pride in my university.”

Despite his Husky pride, Aaron took an opportunity to venture from Storrs to Israel through an organization called Be’er Sova. This past summer, he worked with the volunteer organization to provide the people of the city with nutritional security in their community restaurant and central office.

As an engineer, Aaron anticipated his summer work to be an internship or cubicle job. However, the chance he took with the program expanded his horizons and opened his eyes to global social issues. “I met some amazing people from around the United States and had the opportunity to travel on my own for over six weeks. The experience left me with the impression that everyone can help drive social change and have an impact, and that most people just want a peaceful life.”

In respect to his long-term goals, Aaron maintains this viewpoint by simply saying, “My baseline goal in life is to be happy.” He is currently inclined towards graduate school and possibly becoming a professor, continuing his vivacious efforts in academia. With his dedication to a range of interests and effervescent spirit, there is no doubt this bright UConn mind will find his niche.