Academy of Distinguished Engineers Inductees for 2017 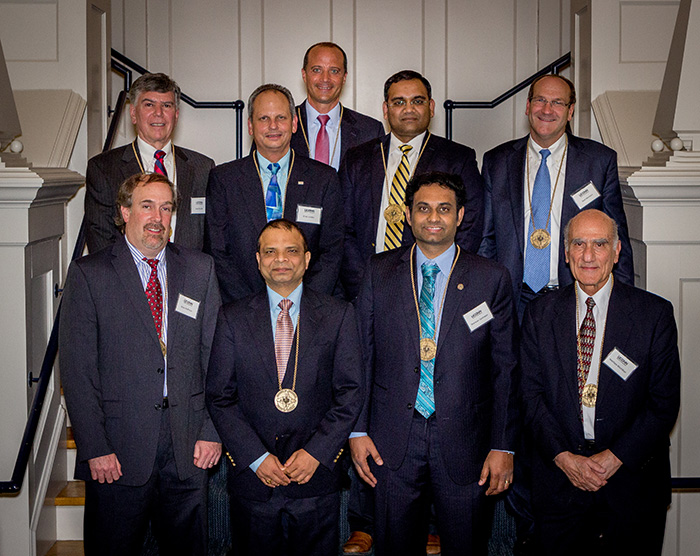 Each year, the School of Engineering honors exceptional alumni and friends who have helped us in countless ways. Below are the individuals who were inducted into the Academy of Distinguished Engineers for 2017.

Sharavan Govindan is the Director of Content Management at Bentley Systems Inc. He has educated thousands of engineers globally. He earned his M.S. in Environmental Engineering from UConn and his B.Tech. in Chemical Engineering from St. Joseph’s College of Engineering. He also completed Project Management Mastery from Stanford University, Business Foundations Specialization through Coursera from The Wharton School, and Credential of Readiness program from Harvard Business School.

Mr. Govindan coauthored several books and articles, including Students’ LinkedIn Checklist, How Companies Succeed in Social Business, Computer Modeling of Water Distribution Systems, and Social BOOM. He has an ongoing partnership with the School of Engineering — through guest lectures, student mentorship, strategic initiatives, and is a CEE Advisory Board member. He is a frequent speaker at learning, technology, and social media conferences, and a judge for STEM competitions. To acknowledge his achievements, Mr. Govindan has received the PATHFINDER Award from Bentley, earned the Annual Innovation Award from CEdMA for Bentley and other recognitions. He founded the Govindan Family Fellowship Program, which has awarded several fellowships to Engineering students. In summary, he is inspired by community development, great causes, lifelong learning, and selfless humans.

Brian Hoffmann is the Vice President and General Manager of AMETEK’s Aerospace and Defense Maintenance, Repair and Overhaul (MRO) Division. AMETEK is a global leader in third party MRO services to commercial, regional, military and business aviation. In this role Mr. Hoffmann has full fiscal responsibilities for a $200 Million components MRO business with sales and factory locations across North America, Europe and Asia. Customers include all major passenger and freight airlines worldwide and prominent aircraft manufacturers. Mr. Hoffmann received his B.S. in Mechanical Engineering from the University of Connecticut in 1986 and earned his MBA from Bryant University.

Previously, he was the Divisional Vice President and Business Unit Manager for the Power Instruments Business Unit at AMETEK, where he had responsibilities for the design, manufacture and sales of electronics and sensors which provide highly reliable communication, monitoring and control of high and ultra-high voltage transmission and generation power substations. He has been with AMETEK for 12 years. Before joining AMETEK, Mr. Hoffmann was with Danaher, Inc. for over 12 years, rising to the position of Vice President of Operations for the Precision Systems Division of Danaher Motion. At Danaher, Brian oversaw the design and manufacture of ultra-high precision motion control staging and electronics for the semiconductor, life science, photonics and imaging industries.

A Professional Engineer in 16 states, Mr. Leshko is nationally certified as both a Bridge and Tunnel Inspection Team Leader with extensive experience inspecting large and complex structures. He has experience developing bridge plans and specifications and performing bridge analysis and ratings. Mr. Leshko has been with HDR since 1998. He was previously a Project Engineer with URS Greiner, and served on Active Duty with the United States Air Force for seven years as a Civil Engineering Officer through the rank of captain. Mr. Leshko is a Fellow of the American Society of Civil Engineers, an Inaugural Fellow of the Structural Engineering Institute within the American Society of Civil Engineers, and a National Highway Institute Certified Instructor, teaching the Tunnel Safety Inspection Course and Tunnel Safety Inspection Refresher Course, which he helped develop as the lead Subject Matter Expert.

From 1983 until his retirement in 1997, he was Professor of Electrical Engineering and Director of the Electrical Insulation Research Center at the University of Connecticut. He also worked for 16 years for Detroit Edison Company, where he was Supervising Engineer in the Engineering Research Department, and five years for ASEA (now ABB). Dr. Mashikian is a Life Fellow of the Institute of Electrical and Electronics Engineers (IEE), a member of the Connecticut Academy of Science and Engineering and a Past Chairman of the Insulated Conductors Committee of IEEE/PES. He holds a dozen patents and has published extensively on cables, dielectrics, diagnostic systems and electric vehicles.

Neal Montany is the Chief Operating Officer of Perfumania Holdings, Inc, a specialty retailer and distributor of fragrances and related beauty products. He received his B.S. in Mechanical and Materials Engineering from the University of Connecticut in 1983 and earned his M.B.A. from Boston University. Mr. Montany’s career in operations management spans over three decades, including senior management positions at United Technologies Corporation and International Aero Engines.

He was previously the Vice President and General Manager of GKN Aerospace in New York. There, he spearheaded the restructuring of the business, including initiatives to enhance operating efficiencies and generate new revenue sources. At United Technologies, he was the Director of the Stationary Fuel Cell Business within the UTC Power Division, which he led through successful product development, validation, certification and into commercial operations in the United States and Asia. Prior to UTC Power, Neal was at Pratt and Whitney for over 20 years. He started as an F100 test engineer and held positions of increasing responsibility including Vice President of Operations for International Aero Engines and Program Manager for the PW4000 Engine Program.

Venkatesh Mutalik is the Engineering Fellow and Vice-President of Technology and Strategy for ARRIS. He leads the technical direction of the Access and Transport Organization within ARRIS with special emphasis on optical communications. Mr. Mutalik earned his M.S. in Electrical and Systems Engineering from the University of Connecticut in 1995. He earned a B.E. in Electrical and Communications Engineering from Osmania University in India and later received an M.B.A. from Syracuse University.

At ARRIS, Mr. Mutalik led the creation of the AgileMax platform that enables the cable industry to transition to all-fiber deployment. He pioneered and led deployment of full-spectrum multi-wavelength optics technology providing a revolutionary increase in capacity and reach for the access plant. This has now become the mainstay of the Cable Industry. Previously, Mr. Mutalik was Chief Technologist at C-COR in the Broadband Communications Products Division from 2003-2008, and was Technical Director of Philips’ Broadband Networks. A member of the Society of Cable Telecommunications Engineers, Mr. Mutalik has 22 U.S. patents and has published 23 articles in peer reviewed publications.

Louis Parrillo has over 40 years of experience in technical and business leadership, which he shares through Parrillo Consulting, LLC. He was a University Scholar and earned his B.S. with High Honors and with Distinction in Electrical Engineering from the University of Connecticut in 1964. He later earned an M.S. and Ph.D. in Electrical Engineering, as well as a Master of Arts from Princeton University. Starting at Bell Telephone Laboratories, Dr. Parrillo was later with Motorola, rising to the rank of Corporate Vice President, Chief Technology Officer and Director of the DigitalDNA Labs for Motorola’s Semiconductor Products Sector. He led all process technology, research and development for that sector.

Since retiring from Motorola in 2003, Dr. Parrillo has held executive positions at SuVolta Inc., Rambus Inc., Unity Semiconductor, and Spansion Inc. He is currently a member of the Technology Advisory Board for Cypress Semiconductor. Dr. Parrillo is a member of the U.S. National Academy of Engineering and a Fellow of the IEEE. He received the IEEE Frederik Phillips Award for technical and managerial achievements, the Electron Devices Society’s J.J. Ebers award for process architecture and device design and the Electron Devices Society Distinguished Service Award.

Vijay Ramani holds the Roma B. and Raymond H. Wittcoff Professorship in the Department of Energy Environmental and Chemical Engineering at Washington University in St. Louis, and concurrently serves as the Director of the Center for Solar Energy and Energy Storage at Washington University. His research interests lie at the confluence of electrochemical engineering, materials science, and renewable energy technologies. NSF, ONR, DOE and ARPA-E have funded his research, with mechanisms including an NSF CAREER award (2009) and an ONR Young Investigator Award (ONR-YIP; 2010).

Dave Zack is currently the Vice President of United States Government Defense Systems and Services (DSS). Mr. Zack is responsible for $3 Billion in annual sales across all U. S. Government military production and sustainment programs.

He also serves as the primary interface between Sikorsky and the U. S. Government for all product line activities, including Marine One Presidential Helicopter Executive Transport mission and foreign military sales. Mr. Zack is also responsible for expanding the BLACK HAWK and Navalhawk platforms globally, as well as developing future technology upgrades and sustainment needs of U. S. Army, Navy, Marine Corps, Air Force and Coast Guard customers. Mr. Zack has over 23 years of engineering research, development, operations and program management experience. He graduated from the University of Connecticut with a B.S. in Electrical and Systems Engineering in 1994 and Albertus Magnus College with an M.B.A. Formerly, Mr. Zack was the Chief Engineer for Defense Systems and Services. Prior to this position, he was the Director of Maritime Military Programs. In this role, Mr. Zack had full fiscal responsibility for the U.S. and International Naval Hawk product lines, as well as the U.S. Marine Corps Presidential Helicopter Executive Transport mission consisting of the VH-60N and VH-3D platforms. Previous Sikorsky positions include the Director of the CH-53K Heavy Lift Program. In this role, Mr. Zack was responsible for a $3.5 Billion System Development and Demonstration Program.