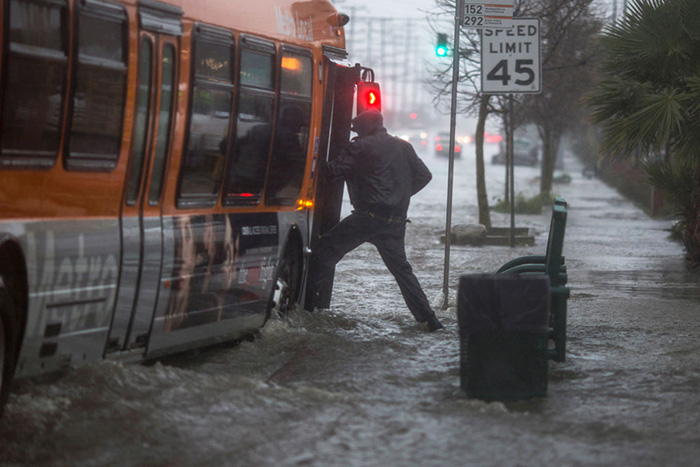 After years of severe drought in southern Calirfornia, heavy winter rains came to the state on Feb. 17, 2017, and with them, the issuance of flash flood watches in three counties, and the evacuation of hundreds of residents from Duarte, Calif. for fear of flash flooding from areas denuded by a wildfire last year. A UConn climate scientist finds that severe rains are likely to continue due to global warming. (Photo by David McNew/Getty Images)

A University of Connecticut climate scientist has confirmed that more intense and more frequent severe rainstorms will likely continue as temperatures rise due to global warming, despite some observations that seem to suggest otherwise.

In a research paper appearing this week in Nature Climate Change, UConn civil and environmental engineering professor Guiling Wang explains that data showing the intensity of severe rainstorms declining after temperatures reach a certain threshold are merely a reflection of climate variability. It is not proof that there is a fixed upper temperature limit for future increases in severe rains, after which they would begin to drop off.

“We hope this information puts things in better perspective and clarifies the confusion around this issue,” says Wang, who led an international team of climate experts in conducting the study. “We also hope this will lead to a more accurate way of analyzing and describing climate change.”

Severe and prolonged rainstorms can have a devastating impact on local environments and economies and are closely watched. These damaging storms can cause catastrophic flooding; overwhelm sewage treatment plants; increase the risk of waterborne disease; and wipe out valuable crops.

Many current climate models show most of the world will experience more intense and more frequent severe rainstorms for the remainder of the 21st century, due to hotter temperatures caused by global warming.

But whether this increase in extreme precipitation will continue beyond the end of the century, and how it will be sustained, is less clear.

Meteorological observations from weather stations around the world show the intensity of severe rainstorms relative to temperature is like a curve – steadily going up as low to medium surface temperatures increase, peaking when temperatures hit a certain high point, then dropping off as temperatures continue rising.

Those observations raise the prospect that damaging rainstorms could eventually ease once surface temperatures reach a certain threshold.

However, Wang says the peaks seen in the observational data and climate models simply reflect the natural variability of the climate. As the Earth warms, her team found, the entire curve representing the relationship between extreme precipitation and rising temperatures is moving to the right. This is because the threshold temperature at which rain intensity peaks also goes up as temperature rises. Therefore, extreme rainfall will continue to increase, she says.

The relationship between precipitation and temperature is founded in science. Simply put, warmer air holds more moisture. Scientists can even tell you how much. A widely used theorem in climate science called the Clausius-Clapeyron equation dictates that for every degree the temperature goes up, there is an approximately 7 percent increase in the amount of moisture the atmosphere can hold. The intensity of extreme precipitation, which is proportional to atmospheric moisture, also increases at a scaling rate of approximately 7 percent, in the absence of moisture limitations.

“There are a lot of studies where people are trying to determine why the scaling rate is lower than 7 percent,” says Wang. “Our study suggests that this is a wrong question to ask. If you want to relate rain intensity to temperature using the C-C relationship as a reference, you have to relate to the temperature at which the rain event occurs, not the mean temperature, which is the long term average.”

Kevin Trenberth, an expert on global warming and the lead author of several reports prepared by the Intergovernmental Panel on Climate Change, joined Wang in the current study. Trenberth is currently a Distinguished Senior Scientist in the Climate Analysis Section at the National Center for Atmospheric Research. He shared the 2007 Nobel Peace Prize with former Vice President Al Gore as a member of the IPCC. Trenberth explains the findings this way:

“In general, extreme precipitation increases with higher temperatures because the air can hold more moisture – although that depends on moisture availability. But beyond a certain point, it is the other way round: the temperature responds to the precipitation, or more strictly speaking, the conditions leading to the precipitation, [such as extensive cloud cover or surface moisture]. The most obvious example of this is in a drought where there is no precipitation. Another example is in cloudy, stormy conditions, when it is wet and cool. By relating the changes in precipitation to the temperature where the relationship reverses – instead of the mean temperature as in previous studies – we can make sense of the differences and the changes. Moreover, it means there is no limit to the changes that can occur, as otherwise might be suspected if there were a fixed relationship.”

This study was funded by the National Science Foundation’s Division of Atmospheric and Geospace Sciences.