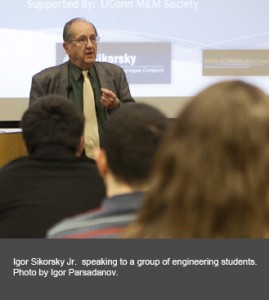 Brothers Nicholai Sikorsky and Igor Sikorsky Jr. recently visited the University of Connecticut to speak to the Management & Engineering for Manufacturing (MEM) class about their father, aeronautical pioneer Igor Sikorsky Sr. Born in Russia in 1889, Igor Sikorsky Sr. had an eventful life that eventually led him to the U.S. His contributions to air travel ranged widely, including innovations in helicopter, airplane and air boat design. He started the Sikorsky Aircraft Company, which continues today in Stratford, CT and is one of the leading helicopter manufacturers in the world. The talk was co-sponsored by the ASME UConn Student Section and the MEM Society, and the brothers were introduced by Mechanical Engineering Prof. Zbigniew Bzymek.

An innovative thinker who combined engineering insight with practical skills, Igor Sikorsky Sr. was described by his son Nicholai as having a true “respect for all things: people, nature, animals, institutions and laws of the universe.” He was an attentive listener who would respond to any question with a thoughtful answer that could have been “published in the Encyclopedia Britannica,” and treated everyone – from the President of the U.S. (he met several) to his factory floor sweeper – with respect and his infallible manners of old world courtesy.

Nicholai spoke of how this respect, often “lost in our modern culture,” helped his father to be a better engineer. Though few of Igor Sr.’s old colleagues and staff remain now, those who knew him personally tell stories of profound gratitude to a man who often quietly appeared at their desk at just the right moment to support their efforts and guide them down the most fruitful path. Nicholai asked the student audience to remember this example of modest leadership when “someday you are executives who will need to work with people and encourage them to accomplish things.”

Igor Jr. related how his father set to work designing and building what he hoped would be the first working helicopter. After investing significant work in his early helicopter design, Igor Sr. realized that the system he had built and the state of knowledge at that time could not produce the necessary horsepower for helicopter flight. He abandoned the work and went on to focus on other air travel designs.

Igor Jr. pointed out that rather than a story of failure, this early effort demonstrates how the greatest success can sometimes be found in a big-picture decision not to continue in a non-productive direction. Eventually returning to the helicopter after his thriving business in air boats collapsed, he said Igor Sr. “put together a lot of ideas and made them work.” Further, he noted that although his father would “in his modesty, never say that that he invented the helicopter,” he was eventually successful in designing and building the first working American helicopter, and in designing the world’s first mass produced helicopter. 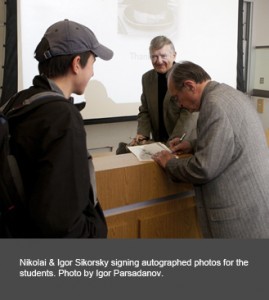 Igor Jr. invited the audience to imagine the life of an aeronautical innovator who “never had a computer other than a slide rule.” A teenager when the Wright brothers first flew, he lived to see a man walk on the moon, and contributed to so many historical moments in air travel along the way. Although the name Sikorsky is now most closely associated with helicopters, Igor Sikorsky Sr. was also an innovator in airplane design, creating the first fixed-wing multi-engine aircraft and pioneering designs in flying boats. Igor Sr. was part of many important technical innovations in aeronautics, and had the foresight to see beyond the hobbyist beginnings of flight to a future in commercial air travel.

Igor Jr. described how in the early days of aeronautics, engineers “designed, built, climbed in and figured out how to fly” their work, joking that it helped to cut down on bad design. He spoke of the importance of the “science of aeronautics” that his father helped to build. A very talented intuitive designer, Igor Sr. made many contributions that include the development of a suite of testing instruments, some now housed in Connecticut museums, which made the design process more scientific and less dependent on a designer’s instincts.

The brothers remember their father with love and respect, and they spoke of being happy to share some sense of “the kind of man it took to do what he did in engineering, which he loved very much.” After the talk they signed autographs and took photos with enthusiastic fans.