Airbus Donates Flap Assembly to UConn for Research and Training 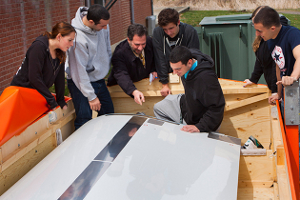 Storrs, Conn. (April 23, 2013)  —  Aircraft manufacturer Airbus has donated an aircraft flap assembly worth more than $774,000 to the University of Connecticut’s School of Engineering for use in its research laboratories and training classes.

Aircraft flaps are hinged surfaces mounted on the trailing edges of the wings of a fixed-wing aircraft to reduce the speed at which an aircraft can be safely flown and to increase the angle of descent for landing. Flaps shorten takeoff and landing distances by lowering the aircraft’s stall speed and increasing drag.