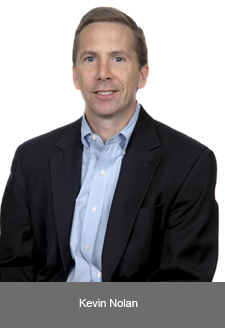 In the not-so-distant future, household appliances will have the ability to collectively manage their electricity usage through a communication network. At the forefront of this developing technology is UConn mechanical engineering alumnus Kevin Nolan (’89), who is vice president of technology for General Electric Appliances.

“Appliances will be a lot smarter,” Nolan said, hinting that intelligent household electronics will hit the consumer market within two or three years.

The average household spends 80 percent of its electricity load on appliances, Nolan explained. Making appliances “smart” will not only make them more efficient but also add great value to consumers.

The novel appliances will communicate with other household electronics, such as computers and televisions, to manage energy consumption. The system will, theoretically, work with traditional electrical utility usage as well as photovoltaic sources, such as solar-paneled roofing.

“It taught me how to come up on learning curves quickly,” Nolan said. “It gives a taste of different things, basically four jobs within two years. You can really learn a lot about yourself and the company.”

The Edison program also gave Nolan the opportunity to travel for the first time, taking him to France and Puerto Rico for job assignments.

“I came off the program and ended up in advanced manufacturing,” Nolan said. He moved to Mebane, NC, to work at a satellite plant.

Relocating was a positive experience for Nolan, who grew from being a design engineer to being a project manager while in Mebane. “Eventually I became engineering manager for all the products at that plant,” he said.

Nolan made his first major impact on the appliance industry when he played an instrumental part in the development of General Electric’s Advantium oven. The oven revolutionized cooking by enabling consumers to cook foods eight times faster than a standard oven.

“I lined that [project] up from a technology standpoint,” he said.

“We are putting in all kinds of new labs and capabilities; what we’re doing is a billion dollar investment. There’s going to be more than 1,300 new American jobs,” Nolan said, noting he personally has hired more than 200 engineers over the past two years.

“We are doing a lot with lean manufacturing and lean design,” Nolan explained. “You keep seeing more engineering and manufacturing moving overseas, so how can we be more competitive?”

The answer is by making a “major reinvestment in this business,” according to Nolan. “We have gone through years of outsourcing and offshoring, but now we are doing a lot of work to bring that manufacturing back here.”