Duties: “I am now the lead engineer for the Mission Ship Control Trainer that we are building to support crew training for the USS Jimmy Carter [the third and final Seawolf Class nuclear submarine commissioned by the U.S. Navy]. My current job has me leading a team of eight engineers and overseeing four subcontractors working on the trainer.”

What’s the Story?
“After graduating from high school in 1980, I joined the Navy and completed nuclear power school. I was assigned to a nuclear cruiser, the USS Bainbridge, and spent five years on the ship traveling around the world and qualifying to operate all the electrical systems for the nuclear plant. I got out of the Navy in 1988 and began work at Electric Boat. 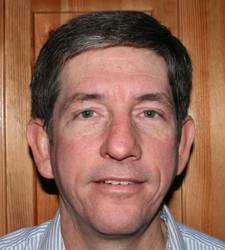 I started out as a janitor, but after a year I took a job on the third shift running the massive air compressors that supply the shipyard. In 1992 I decided to go back to school. I started at Three Rivers Community College and got my General Associates degree before transferring to UConn. As a UConn student, I won several awards and scholarships and served as president of Eta Kappa Nu (HKN), the electrical engineering honor society.

After getting my degree, I was hired as a senior engineer and I was the lead engineer for integrating and testing the ship control software on the USS Jimmy Carter. I also got involved in testing the Multi-Mission Platform that was added to the sub during the construction process. I actually rode the submarine at least 16 times to perform various tests and evaluate the new systems. I have an exciting and rewarding job, testing submarines at sea and flying to Washington, DC to report test results to senior Navy management on one occasion.”

Reflections on UConn:
“The support and guidance by the ECE faculty was priceless and helps me every day. My advisor, Rajeev Bansal, helped to bring out my strengths and directed my efforts in ways that has made my career more rewarding.

My connections with UConn are strong. I send job and internship opportunities to my professors and have done job fairs and interviews on campus for Electric Boat. I also participate as a judge at the Connecticut Invention Convention [sponsored by the School of Engineering] every year.”