After leaving Storrs, armed with his B.S. degree in 1953, alumnus Riza Murteza built an exciting and highly accomplished career that began with designing precision ball bearings in Bristol, CT and proceeded to top leadership positions in bearing companies across the globe, from the U.S. to Indonesia and China. Mr. Murteza recently shared highlights from his fascinating career.

I was born and raised in Waterbury, CT, attended the University of Connecticut School of Engineering and graduated with a degree in Mechanical Engineering in 1953. I retired last year and have had a chance to reflect on my relatively long career and realize how grateful I am for the honor of being a UConn graduate.  There is no doubt that many others have achieved more than I have. Nevertheless, I thought I would like to very briefly share some of my experiences with the young men and women who are currently studying at the University. 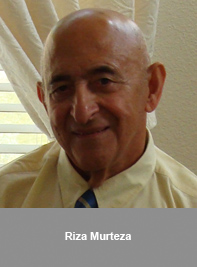 My first position was in Bristol, CT with the then New Departure Div. GMC, manufacturing precision ball bearings. Holding several positions in research and development, I supervised a Full Scale Jet Engine Bearing Test Facility and cooperated with Pratt & Whitney and what was then called the Allison GMC Division on developing the first long life engine bearings using vacuum melted high alloy steel. Thereafter I worked on airframe bearings operating in ultra-high vacuum for the Dyna soar skip glide reentry vehicle cooperating with Wright Field, Ohio, prior to the creation of NASA.  Lastly, I served Lockheed Space and Aerojet General to develop rocket engine vernier swiveling bearings for the Polaris submarine A2 Rocket. The newer A3 used gas injection to vernier control trajectory.

My next position was with the Norma Hoffman Bearings Company in Stamford, CT, where I become a Vice President of Engineering. The company was bought by FAG Bearings of Germany and the highlight was cooperating with Global Marine of California to secretly build four very large gimbaled platform bearings for the deep sea recovery of a sunken Soviet submarine. This project was funded by the CIA and Howard Hughes, and I worked closely with John Graham of Global Marine.

My next position was with LSB Industries Bearings division in Oklahoma as Vice President Engineering where I successfully competed with several major domestic and international companies to win a project in the then Soviet Union to build a large, fully automated multi-line spherical bearing facility in Minsk, Belarus.  The project was very successful and exceeded the specified quality and production specifications. The automation, inspection, and assembly technology was very advanced and we somehow were able to get U.S. Department of Commerce permission to proceed.

During many of the prior years I served on the Anti Friction Bearing Manufacturer’s Engineering committees as Chairman and also as Chairman of the American National Standards Institute for Bearings.

Later, as a consultant I designed and built the first bearings manufacturing facility in Jakarta, Indonesia. The project was funded partially by an Indonesian family and the World Bank. The project required a comprehensive feasibility report which took almost six months to get prepared and approved. I spent a total of five years living in Indonesia and served as General Manager of the facility. The plant was a giant leap in bearings manufacturing with virtual clean room technology rather than the dark, oily factories of the time. Most of the major companies sought to buy the plant, including SKF, FAG and NTN; SKF finally did.

Just prior to leaving Indonesia, executives of the Rexnord Mechanical Power Division Link Belt visited me in Jakarta and asked me to redesign and automate two of their plants and revise processes as required. They had received a prior proposal for one of the plants from Ingersol, and my review showed that it was not financially feasible. New proposals were prepared along with detailed feasibility studies and a joint meeting was held in San Diego with my team and their engineering staff and both projects were undertaken and successfully completed.

Two years later, I returned to Indonesia to establish a “Push to Talk” Mobile Phone network in cooperation with Telecomindo, the Indonesian telecommunications company using Nokia base stations and equipment in Jakarta.

My consulting company, “Bearing Technology Incorporated,” undertook several assignments for the Torrington Bearing Division of Ingersoll Rand and cooperated with their Fafnir Group companies to improve technology. The projects ran for three years with significant changes and new equipment.

A small Chinese company, Nan Hai Bearing in Foshan Province, engaged me to select and install a large automatic Hot Former in their new plant. I selected the Swiss Hatebur company in Basel, Switzerland for the project and it was very successful.

I semi-retired and was contacted by the United Nations Development Programs to serve as a Senior Advisor to assist large Chinese state-owned enterprises reformation, from central planning to market planning and technology. I cooperated closely with CICETE, which is “China International Centre for Economic and Technical Exchanges.”  Senior advisors are normally sent to the large enterprises for short, two or three week visits.  However, after my first presentation the ZWZ Wafangdian Bearing Group Corporation management insisted that I stay in China for a year. I agreed and introduced major changes in technology, introducing “statistical process control” and “just-in-time manufacturing” as well, and improvements in most of the manufacturing processes.  Other areas for improvement included management, sales, distribution, finance, and team building. The Company employed 28,000 people and was finally adjusted to a more practical 10,000 employees. The work led to a 40-enterprise reformation workshop where the “Murteza Experiment” was promoted and thought to be of nationwide significance.

Just prior to the terminal report, I was asked to help the Guan Lemming Watch Company in Shanghai. Despite not knowing anything about watchmaking, I was surprised to see just how much I could contribute to their processing, especially the clean room technology.

After returning home, the Beard Company in Oklahoma asked me to return to China to set up an environmental company. I established a company in Beijing, employed a staff and spent 10 years with a myriad of technologies, including clean coal technology, and finally served as Chairman and President of a new green field organic/chemical fertilizer plant.