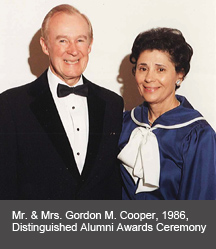 Across his long and storied career, alumnus Gordon Cooper, PE (B.S. Mechanical Engineering ’50) played a leading role in helping major manufacturers grow their global operations.  Among the highlights of his career was his contributions toward expanding the iconic Mickey Mouse watch line first introduced in 1933.

Mr. Cooper is now retired and living in Palm Beach, Florida, where this octogenarian still enjoys hitting the golf links under sunny skies whenever possible.

But during his working career, he was a focused, ambitious achiever who contributed to the expansion of three companies that still exist today: Timex, Shuron Optical and Broan/Nutone.

As a student at Leavenworth High School in Waterbury, Mr. Cooper recalls, one of his teachers had a second job as an engineer at the Brass City’s Waterbury Clock Company.  Admiring Mr. Cooper’s skillful drafting work, the teacher suggested he apply to work at the clock company. That recommendation commenced a long relationship between Mr. Cooper and the company that would become Timex.  At 16, he began work as a junior drafter translating the engineers’ designs into exact, scale models of the mechanical parts that enable a watch to function.  Those were the days before the advent of computers, when everything from architectural drawings and car designs to small devices were painstakingly designed on large pads of paper using a T-square, to be faithfully reproduced by the production team.

As he graduated from high school, World War II dominated global events, and like so many young men, he enlisted in the Air Corps.  He explains that back then, aviation cadets had to have two years of college. To help young men fulfill this requirement, they were sent to one of two universities offering intensive, compressed college courses for cadets. He attended Xavier University in Cincinnati, which provided two years’ worth of education in just six tightly choreographed months. “We students were in school seven days a week, day in and day out, without a break,” he recalls. Next up was pilot training in Biloxi, MS and then cadet training in Enid, OK.  Mr. Cooper was a pilot until the war ended in 1945.

After returning home to Connecticut, Mr. Cooper attended UConn on the GI Bill and focused intently on his engineering studies with the ambition of building a successful engineering career.

Meanwhile, in his native Waterbury, as the Waterbury clock company struggled during the war, it was bought by two Norwegian families, who expanded the operation and renamed it United States Time Corp. (renamed Timex in 1969).

With his freshly minted degree in hand, in 1950 Mr. Cooper returned to his former employer to work full-time as an engineer.  Through hard work, he ascended to Chief Engineer and later Plant Manager.  One of his fondest memories from his years at U.S. Time Corp./Timex is his work with Walt Disney, the visionary, on the design of the company’s iconic Mickey Mouse watch series.  He still has a prototype Mickey Mouse watch among his collection of 200 watches and notes

that the Mickey Mouse watches were very popular with children.  Another dearly-held memory was his role in presenting Timex watches to two of the original seven astronauts, John H. Glenn and L. Gordon Cooper, shortly after their historic Mercury spacecraft flights in 1962-63.

Intent on climbing the career ladder, he left for Rochester, NY, where he joined Shuron Continental Optical, a manufacturer of lenses and optical equipment for the eyeglass industry, in the role of Vice President of Manufacturing.  After ascending to President and CEO, he was lured back to Connecticut by Timex to serve as Vice President and later President of Timex Industries.

Like a ping-pong ball being volleyed across the net, in 1976, he was recruited away by another big company, Energy Products Group/Gulf & Western in Illinois, which he left two years later to assume the role of President and CEO of Broan Manufacturing Corp. (now Broan-NuTone) in Hartford, Wisconsin.  Cooper remarks that he took the company – the leading manufacturer of kitchen range hoods, trash compactors and built-in household fans – from a small company to a very large corporation.  When the company was sold to Nortek, he remained President until his retirement in 1989.

Despite the demands of a remarkable executive career, Mr. Cooper married and helped raise two children, earned his Professional Engineer license (he was licensed in Connecticut, Florida and Arkansas) and became a Certified Manufacturing Engineer, and also managed to earn a certificate from Harvard’s Graduate Advanced Management Program. He also helped to invent two patented technologies – a vacuum die casting process and apparatus and an air-to-ground missile device.

An avid golfer, he moved to Palm Beach Gardens, FL after retirement, where he lived next to a golf course and still – undaunted at the age of 87 – regularly enjoys golf.