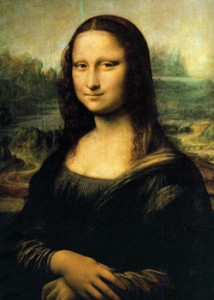 The highlight of UConn’s Alumni Weekend in Storrs was a presentation by alumnus Ralph Bernstein (B.S. Electrical Engineering ’56) on the use of digital image technology to reveal secrets of Leonardo da Vinci’s 15th century masterpiece, the Mona Lisa. Mr. Bernstein, an expert in digital imaging, was joined by art historian and adjunct professor of English, Dr. Mary Gallucci, before an appreciative and attentive audience of alumni, faculty and students from across the UConn campus. View photos here.

Mr. Bernstein, now a science and engineering consultant, spent 36 years at IBM, where he was principal investigator on the Landsat-l Program. This experience was key to his collaborative role in unveiling the painting’s hidden surprises.  During its 500 years, the protective varnish covering the Mona Lisa had yellowed and become crazed, making it difficult to fully appreciate the exquisite beauty of the original painting.  In 1986, Mr. Bernstein participated on a team that sought to analyze and digitally “peel back the layers” on the famed portrait.

According to Mr. Bernstein, in the mid-1980’s art historian Lord Kenneth Clark, a Leonardo expert, approached Dr. John Asmus, a physicist at the University of California, San Diego, and one of the world’s leading art conservation scientists, to “remove the viewing impediments” on the painting using digital methods.  Dr. Asmus assembled the team, and the laborious process got underway that involved digitizing a color image of the painting so it could be processed by computers located at the Jet Propulsion Laboratory in Pasadena, CA.  Mr. Bernstein and Jitendra Dave at IBM’s Scientific Center in Palo Alto applied digital image processing technologies pioneered for NASA’s earth-observation and medical-imaging research to correct the color of the image, digitally remove the varnish cracking, and explore pentimenti – evidence of underlying images that may now lie hidden.

Throughout the presentation, Mr. Bernstein touched upon the art, history and engineering of the Mona Lisa project, from a discussion of Leonardo’s myriad military weapons designs, his study of ideal proportions of the human body, and habit of keeping the Mona Lisa with him, to the artistic traditions of the 15th century. Mr. Bernstein noted, for example, that Leonardo commonly used the sfumato effect to eliminate harsh outlines and impart a sense of visual softness and continuity; that he often incorporated woven reeds into his paintings in deference to the reeds that grew along a river in the da Vinci region; and that the Mona Lisa was painted on poplar wood. 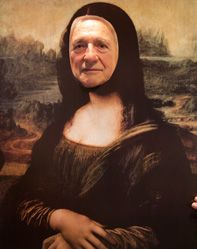 Mr. Bernstein also discussed the age-related problems that afflict the great painting, including craquelure, or cracking, of the protective varnish, and the yellowing of the varnish over the centuries, which has effectively cast a yellowish haze over the painting’s original hues. Using a combination of infrared scanning, computerized digital enhancement techniques and spatial filtering, the team was able to peel back the layers to reveal the painting in a new light. Among the team’s deductions was that Leonardo may have painted a modest pearl necklace on the Mona Lisa that he later overpainted, and that portions of the eyes and mouth may have undergone some attempts at restoration.