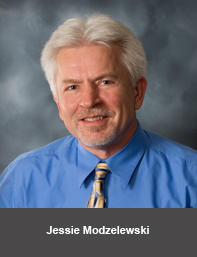 Electric Boat submarine engineer and UConn alumnus Jessie Modzelewski was born and raised in Poland, also the birthplace of Admiral Hyman G. Rickover, considered to be the father of the modern nuclear submarine. Growing up near the Baltic Sea, Jessie spent many years of his childhood playing in a shipyard; now, he works at General Dynamics Electric Boat’s Groton, CT facility where the U.S. Navy’s fleet of nuclear submarines is designed and built.

His journey from the Baltic Sea to Groton, where he specializes in the stress analysis of submarines, began when his family moved to the U.S.when he was nine years old.

As a junior high school student in New Britain, Jessie was interested in mechanics and design. He signed up for woodworking classes, believing he wanted to pursue a career in architecture. After meeting with a guidance counselor, however, Jessie realized that his interests in building design and construction were more in line with an engineering career. The counselor distilled the two disciplines this way: architects come up with a vision, while engineers are the ones who make it work.

“I always had an interest in the physical world,” Jessie said. “I knew then that I really wanted to be an engineer, with a focus on structures.

So, after graduating from New Britain High School, Jessie decided to pursue civil engineering at UConn, where he connected with several professors who shared his interests.  In particular, he was captivated by the work of Dr. John DeWolf, a bridge vibration monitoring expert, and by Dr. Jack Stephens, whose work spanned roadway materials and structural strengthening.

As an undergraduate, Jessie landed an internship at a Connecticut metal plating company. He was tasked with building an earthen retaining wall, a project that entailed excavating a hill. In developing the design, Jessie reached out to his professors to assist in evaluation of various concepts and construction techniques. Professor Stephens in particular helped guide him during his internship, honing his skills. The experience proved pivotal; he enjoyed the internship so much that he almost accepted a construction job in Houston, TX after he graduated.

But before he accepted the job offer during his senior year, he toured the Naval Underwater Systems Center and was captivated by a shock testing demonstration of a submarine component. Later, during a job interview at Electric Boat, a walk through an Ohio class submarine cemented his decision to accept a post-grad job at Electric Boat. “The curvature of the vessel and its unique mission requires complex structures, attachments, and materials. These additional challenges triggered my desire to better understand the physics involved” Jessie said. “It truly is an engineer’s fantasyland here, providing opportunities from construction support activities directly onboard a ship to high end research and development, and everything in between.”

“Building a submarine requires tremendous workmanship and a lot of up front design and engineering effort,” Jessie explained. “At each stage of the construction process and ship operation there are many forces to consider: seismic, thermal, wind, hydrostatic and hydrodynamic pressures, and potentially shock resulting from underwater explosions. We want our submarines to go into harms way, come out on top, and continue their missions.”

After graduating from UConn in ‘79 with his B.S. in civil engineering, he worked at Electric Boat for a year before deciding it was time to go back to school. “Although I had the fundamentals to perform my job, the amount of knowledge I had was still limited, compared to the depth of expertise in some Electric Boat engineers. I needed to go to grad school to increase my knowledge and fulfill my interests,” Jessie explained. Returning to UConn to obtain his masters in civil engineering, Jessie studied concepts such as finite element theory and tensor analysis.

He decided to return to school for a graduate degree.  “The amount of knowledge I had was still limited, I needed to go to grad school to fulfill my interests,” Jessie explained. So, while continuing to work at EB, he took coursework toward a master’s degree in civil engineering that exposed him to concepts such as finite element theory. The theory is so important in the line of work he does today, which involves the application of finite element solutions to understand dynamics, that he believes finite element theory ought to be a concept introduced to undergraduates engineering students.

Jessie found that his new skills enabled him to derive even greater fulfillment from his work.  “I really enjoy the complexity of my work,” Jessie said. “I look forward to the challenging aspects.”

The more he learned, the more fulfilling his work became. On a major project during the mid-80’s he was part of a team of engineers working to develop a state-of-the-art,transient fluid-structure interaction shock analysis technique that would satisfy the Navy’s stringent requirements for shock qualification of structures by analysis. This effort required performance of physical tests and computational simulations to understand the physics of the explosion, shock wave propagation through the fluid, and transfer of energy into a submarine structure. The system of equations developed to simulate these events was so complex that Electric Boat’s computers were not powerful enough to process the information.

Jessie traveled to Fort Worth, TX, where he was responsible for processing the project’s equations on a CRAY supercomputer, the most powerful computer at the time. Locked inside a bank-quality vault, “the CRAY was brought to its knees by our equations,” Jessie said. “It was a pretty cool experience.”

Looking back over his career, Jessie says one of the highlights was helping to develop this complex shock analysis technique. Having worked with government laboratories and universities for years to validate the analysis method, he is pleased that today the method is routinely used in the evaluation of not only submarines but also surface ships.

“As part of these activities we have sent engineers to UConn to get their PhDs,” Jessie said. Electric Boat has continued collaborative efforts with UConn over the years through the sponsorship of senior capstone engineering projects and participation in the School of Engineering’s practice-oriented Master of Engineering (MENG) degree program, offered at the UConn Avery Point campus.

Jessie’s team helps design everything from computer codes to other analysis methods such as weld distortion prediction tools. Jessie is still particularly fond of shock analysis, the same testing that originally caught his interest more than three decades ago.

For now, he has plenty of exciting projects to keep him fascinated. “There’s never a dull moment working here,” Jessie laughed. Electric Boat is currently focused on replacing the Ohio class submarines. “The design process will be finished by 2019,” Jessie said. “By 2026, the first Ohio replacement submarine will be built.”

And as for a name of the new submarine? “We won’t know what to call the replacement class until later in the design process when the subs are christened by the Navy. For now, we just refer to it as the Ohio Replacement,” he said.

Jessie and his family live near Connecticut’s shoreline, close to the Groton facility. A true lover of all things aquatic, Jessie owns a power boat and also enjoys sailing. Jessie visits UConn to recruit for Electric Boat at the School of Engineering’s career fairs.