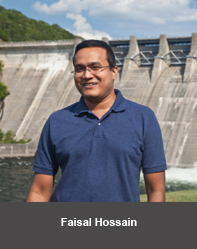 Dr. Faisal Hossain, an associate professor at Tennessee Technical University (TTU) who received his Ph.D. in Environmental Engineering in 2004, has been selected to receive the prestigious 2012 Charles Falkenberg Award.  The Falkenberg Award is sponsored jointly by the American Geophysical Union and the Earth Science Information Partnership (ESIP) and honors individuals who have “contributed to the quality of life, economic opportunities and stewardship of the planet through the use of Earth science information and to the public awareness of the importance of understanding our planet.”

According to Dr. Emmanouil Anagnostou, Northeast Utilities Foundation Chair of Environmental Engineering, who mentored Dr. Hossain as his thesis advisor and nominated him, Dr. Hossain is highly respected for his research efforts to promote a remote sensing-based flood warning system for developing nations where data are scarce and institutional capacity limited.

Dr. Hossain has championed a space-based data information system that would leverage current and future Earth science satellite missions as vital data sources that may contribute to accurate precipitation prediction and water management.  Dr. Anagnostou notes that Dr. Hossain has demonstrated that if researchers were able to accurately estimate the prediction uncertainty within current satellite observations of precipitation, the benefits of information derived from satellite missions could justify their costs through savings in lives and property.

After identifying more than 30 flood-prone nations that would benefit from the insights afforded by space-borne Earth observation data, notably precipitation data, in a 2006 paper published in the journal EOS, Dr. Hossain committed himself to the task of educating and engendering support from agencies, governments and the research community for a collaborative effort.

In nominating Dr. Hossain, Dr. Anagnostou credited him with approaching the challenge through a “forward” approach that recognizes the need for grass-roots capacity building in vulnerable locales to adapt to emerging technology.  In this way, he has been able to effectively demonstrate the potential economic benefits of satellite missions that provide valuable precipitation data for vulnerable regions.  Dr. Anagnostou notes that this approach is helping to reverse the perceptions of a variety of skeptical decision makers and make important progress toward getting these future missions planned and funded.