The University of Connecticut has produced more than a few “household names” in the sciences, engineering and innovation arenas, many of them visionaries whose contributions underpin today’s leading technologies.

One of the University’s most renowned graduates is Daniel E. Noble (‘29), who is widely regarded as a pioneer in mobile communications and semiconductors. 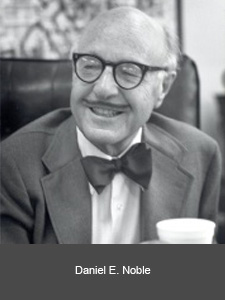 Dr. Noble, a native of Naugatuck, CT and a radio enthusiast, earned his bachelor’s degree in electrical engineering at what was then called the Connecticut State College (now UConn). He also earned his doctoral degree from the Massachusetts Institute of Technology and then returned to teach at UConn  (1924 -1940) before building a long and distinguished career at Motorola.

While at UConn, he designed, built and operated the college radio station and developed expertise in the area of FM, or frequency modulation, the technology used in mobile radios. Impressed with his work in Storrs, two Hartford radio stations sought him out and asked him to build relay stations for them. For one of the stations, Dr. Noble built one of the first FM broadcast stations.  This expertise attracted the attention of law enforcement agencies eager for better communications devices in squad cars.  Working with the Connecticut State Police, Dr. Noble developed the nation’s first two-way radio state police communications system.

This remarkable achievement also drew the attention of Paul Galvin, founder of the Galvin Manufacturing Corp., which later became Motorola Corporation.  Mr. Galvin recruited Dr. Noble in 1940 to serve as Director of Research at the Chicago manufacturing company.  Among his first challenges was to design commercial FM two-way radios for police and the U.S. Signal Corps. He also oversaw development of the Army’s SCR-300 FM Walkie-Talkie. Besides conducting groundbreaking work in field of radio communications, Motorola credits Dr. Noble with recognizing the significance of the transistor’s potential soon after it was invented in the late 1940s.

Another UConn engineering alumnus, Jack Germain, was blessed with the good fortune to work with Dr. Noble at Motorola during those heady times.  Like many of his generation, Mr. Germain was a World War II vet who took advantage of the GI Bill to earn his B.S. in electrical engineering at UConn in 1950.  After earning his degree, he went to work immediately at Motorola as a junior engineer.  It was a time of global uncertainty.  The USSR had tested its first atomic bomb, the Korean conflict had begun, and the U.S. was still investing heavily in the manufacture of military aircraft, ships and bombs.

At Motorola, he was immersed in an exciting, fast-paced world of innovative ideas and opportunities.  Successive promotions landed him in the role of Chief Engineer overseeing the efforts of 3,000 engineers on a variety of transistor-less mobile radio products alongside Dr. Noble.  Mr. Germain recalls, “When I first went to work in the early 1950’s, the auto industry was working on converting vehicle electrical systems from the original 6 volt systems to 12 volt systems.  So we had to design a radio that would work in either 6 or 12 volt cars. This was my first complex challenge and out of it came a radio system we called the Twin V line which would work in a either case with no adjustments.” 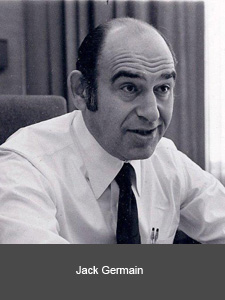 The industry was abruptly transformed by the advent of the transistor and other semi-conductors – compact, reliable, economic and capable of a myriad of functions.  “Up until that point,” recalls Mr. Germain, “we had no device that would work directly off a battery.  With the invention of the transistor, we could build a transmitter and a receiver tied directly to a battery.  This setup offered significant advances in features, not the least of which was an enormous leap in reliability.  New, more capable solid state products soon followed.”

Transistors not only changed radio communications, they also laid the groundwork for today’s computers by offering an alternative to bulky vacuum tubes. In 1949, Dr. Noble established a Motorola research facility in Phoenix to carry out research on solid state electronics. The facility eventually established Motorola’s leading role in the semiconductor business.

Dr. Noble was awarded nine patents and numerous honors, including election to the National Academy of Engineering (1968) for his “leadership in the development of a wide variety of electronic devices and systems.”  In addition, he was elected a Life Fellow of the IEEE and the Franklin Institute, was presented the WEMA Medal of Achievement, the Franklin Institute’s Stuart Ballantine Medal, the University of Connecticut Engineering Alumni Plaque, and the IEEE Edison Medal (1978).

That same year, Mr. Germain was named Motorola’s first Senior Vice President of Quality and went on to oversee the company’s development and deployment of yet another revolutionary concept, the Six Sigma system. Continuous improvement in customer satisfaction and Motorola’s business success became the standard.  So, in 1981, the company committed to increasing the quality of its products and services by an ambitious five-fold in just five years.

Mr. Germain notes proudly that the company achieved its aims in just a few years, laying the foundation for the Six Sigma culture. To achieve Six Sigma, Motorola set a target of no more than 3.4 defects per million for every important aspect of the company.  Under Mr. Germain’s leadership, the company achieved major breakthroughs in such areas as engineering, manufacturing, finance and distribution resulting in Motorola earning the first-ever Malcolm Baldridge National Quality Award, established by the Reagan Administration in 1988. The company’s leadership in establishing measurable, rigorous quality standards led to over 75 quality lectures presented by Motorola personnel before audiences of over 110.

Another important success, achieved while Mr. Germain was Assistant General Manager of the company’s Communication Sector, was its entry into the previously impenetrable Japanese telecommunications market.  Mr. Germain notes that “Japan had a lot rules that made it difficult to do business.  I was placed in charge of a program to break into the potentially lucrative paging market.” Mr. Germain wrote a letter to a high-ranking Nipon Telegraph and Telephone (NTT) official stating that Motorola was interested in selling NTT its popular pagers.  The letter produced an invitation to visit and with the help of innovative product development, the U.S. Embassy in Japan, Motorola’s Washington office and the U.S. State Department, the stage was set for NTT to buy Motorola equipment – marking an important new era in U.S./Japan collaboration.  “This success confirmed the use of techniques that were later embodied in the Six Sigma program,” remarks Mr. Germain.

Mr. Germain was involved in another important development: the rise of cellular radio. He led a team that installed a comprehensive cell radio system in Washington, D.C. and developed demonstration projects to prove the feasibility of cellular radio.

After retiring in 1988, Mr. Germain consulted to numerous major companies and one top university, Purdue, that sought his assistance in implementing the Six Sigma model. He notes that three of those businesses went on to win the Malcolm Baldridge award.

As a training ground for inventive, dedicated engineers, UConn has produced many world-class individuals, not least Dan Noble and Jack Germain, two electrical engineers whose technological legacies and contributions at Motorola will surely stand the test of time.