While many undergraduate students are home working summer jobs, relaxing, and maybe playing video games, one student is taking the use of his gaming station to a new level, thanks to a UConn IDEA Grant.

Rosse Gates ’16 (ENG) was awarded an IDEA Grant last year to support his project to build an autonomously controlled quadcopter – a helicopter powered by four rotors. The grants are available to UConn undergraduate students in any major at any campus, providing funding for students’ self-designed projects.

Gates proposed a quadcopter that could be used to survey and land in disaster areas or other areas that may not be accessible by humans. The novel aspect of his project is that the quadcopter will not be controlled by a human, other than being provided with an initial set of GPS coordinates for its destination. The system would find a suitable landing zone and execute a landing using only decisions made by the on-board computer. 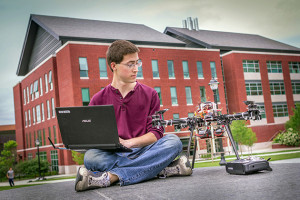 Rosse Gates ’16 (ENG) with the a helicopter powered by four rotors that he designed and built with support from the IDEA Grant program. (Christopher LaRosa/UConn Photo)

“The IDEA Grant award has truly enabled me to take my idea for this project and begin to make it a reality,” Gates says. “The grant provided the funding for me to purchase the equipment required for the project and to devote the time to working in the lab, building and testing the system.”

The quadcopter uses a retail Xbox gaming station’s Kinect sensor to analyze the ground topography and send back a “point cloud” of hundreds of thousands of X/Y/Z coordinates to one of the quadcopter’s two on-board computers. One computer analyzes the data and makes decisions on the suitability of a landing site and on the actions to take, then sends instructions to another computer that instructs the copter where to go.

Gates’ inspiration for his project stems from an incident he read about in Rocket Boys, a book by Homer H. Hickam Jr., in which an explosion causes a mine’s deep entrance shaft to be rendered inaccessible to rescue workers. “I really wanted to create a quadcopter that could descend a vertical mine shaft on its own, take 3-D images of the mine’s condition, and return to the surface to show its findings,” Gates says. However, in the course of researching his project, he found that building a quadcopter that autonomously navigated underground was well beyond the scope of his project.

“I then thought, ‘what if I could land inside that area?’ I would be able to perform the mapping calculations while on the mine floor, sweep a camera around, locate future points of interest, fly to them, and continue the process until an entire area had been covered,” Gates explains. “My immediate project is to identify the suitable landing areas and navigate to them – mapping may come later in the project.”

Gates’ project supervisor Shalabh Gupta, assistant professor of electrical & computer engineering, says “The project is ambitious, because it’s a new concept, but it’s very doable.” Gupta runs the Laboratory of Intelligent Networks and Knowledge-perception Systems (LINKS), which has provided Gates with the lab space and collaborative environment to build his system. “We have other students working in the LINKS lab who are developing different types of unmanned intelligent systems, and autonomous decision-making is the key focus of these systems,” Gupta says, “so Rosse is able to work in that setting and benefit from other students’ knowledge and experiences.”

Says Gates, “After working in Professor Gupta’s lab, I was inspired to take a number of robotics-related classes that have completely changed the direction I see for myself after college. I’ve met a whole community of robotics students of which I’ve become a part.

“I would have never gotten this far without the IDEA Grant,” he adds, “which inspired me to thoroughly explore the project possibilities on campus.”