A team of UConn biomedical engineers, working with colleagues from Yale, MIT, and Harvard, has developed a simple, inexpensive, and quick technique for the diagnosis and monitoring of sickle cell disease that can be used in regions where advanced medical technology and training are scarce. 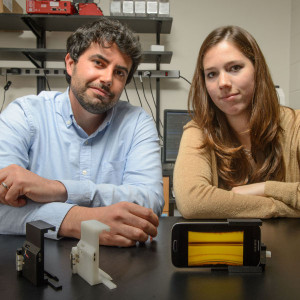 Using a 3D printed device, the team – led by UConn assistant professor of mechanical engineering Savas Tasoglu – has created a novel testing platform that can accurately diagnose and monitor sickle cell disease in the field or at a remote clinic, using just a few drops of blood. The platform is contained in a lightweight, compact box that can be attached to a common Android smartphone.

“Our technique shows great promise as a broadly applicable tool for both basic and applied research, as well as a screening and diagnosis instrument for point-of-care settings,” says Tasoglu, an expert in global health, microfluidics, and cell-based diagnostics for points-of-care. The research was supported by a grant from the American Heart Association.

Sickle cell is a hereditary disease that affects an estimated 90,000 Americans, as well as people in all countries of Africa. It is a serious public health issue that, if left undiagnosed, can cause life threatening “silent” strokes and lifelong damage.

The key to the new device is magnetic levitation. Sickle cells, because of their unique crescent moon or sickle-like shape, tend to be denser than healthy red blood cells and therefore levitate or float at a lower height when the cells are placed in a paramagnetic solution and subjected to a magnetic field, says UConn graduate student Stephanie Knowlton, the article’s first author.

“This approach enables a binary (yes/no) decision for identification of sickle cell disease, even by the naked eye,” says Tasoglu.

Here’s how the device works: 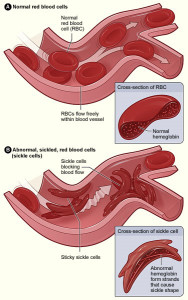 A clinician takes a small blood sample from the patient and mixes it with a common, salt-based solution that draws oxygen out of the sickle cells, making them denser and easier to detect. (Healthy red blood cells exposed to the solution are not affected by it.) The sample is then loaded into a disposable micro-capillary that is inserted into the tester attached to the smartphone. (All of this can be done in under one minute.)

Inside the testing apparatus, the micro-capillary passes between two magnets that are aligned so that the same poles face each other, creating a magnetic field. The capillary is then illuminated with an LED that is filtered through a ground glass diffuser and magnified by an internal lens. The smartphone’s built-in camera captures the resulting image and presents it digitally on the phone’s external display. The blood cells floating inside the capillary – whether higher floating healthy red blood cells or lower floating sickle cells – can then be easily observed. The device also provides clinicians with a digital readout that assigns a numerical value to the sample density to assist with the diagnosis. The entire process takes less than 15 minutes.

“With this device, you’re getting much more specific information about your cells than some other tests,” says Knowlton, who started her research as an undergraduate at UConn and is now pursuing her Ph.D. with Tasoglu. “Rather than sending a sample to a lab and waiting three days to find out if you have this disease, with this device you get on-site and portable results right away. We believe a device like this could be very helpful in third world countries where laboratory resources may be limited.”

The use of smartphones for medical diagnostics and health care applications is not new. A myriad engineered devices have been developed to identify and monitor everything from potential heart arrhythmias to kidney disease and diabetes.

But while other applications use the phone’s imaging infrastructure to magnify or analyze samples, the device developed in Tasoglu’s lab uses magnetism to levitate particles in a sample while the device is attached to the phone. The phone’s picture-taking capabilities are just one feature of the overall technique.

“Some people have been using smartphones to look at tissue slides or blood smears,” says Knowlton. “We’re looking at the actual real time activity of these cells and what they are doing in response to a magnetic field.”

Adds Tasoglu: “This approach enables an inexpensive and portable way of detecting the disease with permanent magnets without requiring any peripheral device, which is perfect for point-of-care settings.”

The lab used donated blood samples from individuals diagnosed with sickle cell disease and a control group to test the test.

Tasoglu’s lab has filed a provisional patent for the device, and is working on expanding the device’s capabilities so it can be applied to other diseases.

The research was supported in part by the American Heart Association and UConn’s Research Excellence Program, which provides seed funding in support of innovative faculty research. It appears online in Nature Scientific Reports.