After a competitive voting process, associate professor (ECE) Dr. Shengli Zhou was elected to the SPCOM TC (Signal Processing for Communications Technical Committee of the IEEE Signal Processing Society) for a three-year term, effective January 1, 2013. As a member of the SPCOM TC, he is expected to play an active role in the technical and professional activities of the signal processing society in general, and SPCOM TC in particular. His duties will include conducting conference reviews as well as being actively involved in the operation of the committee, such as award nominations, elections, membership, education and the like.

Students interested in helping the global community have formed a new club, “UConn Empower,” whose mission is to “help to bring about long-term change by empowering the underprivileged through education and health care.”  Lior Trestman, a Biomedical Engineering major (’15) and Community Relations Chair of the club, notes that for the 2012-2013 academic year, the club will be working with the organization, Better World Cameroon, which is an orphanage in western Cameroon. Fellow BME student Nabid Ahmed serves as club secretary.  To become involved in UConn Empower, and to learn more, click here to read a recent Daily Campus news story about the club.

ChE Well Represented at Annual AIChE Meeting
UConn chemical engineering students shone at the American Institute of Chemical Engineers (AIChE) annual meeting held in Pittsburgh from October 26th to November 2nd.  With Hurricane Sandy bearing down on the Eastern Seaboard, it was challenging to get everyone out to the conference in advance of the storm, and some faculty and students were unable to attend.

Despite the weather setbacks, during the undergraduate conference, which preceded the professional/academic por 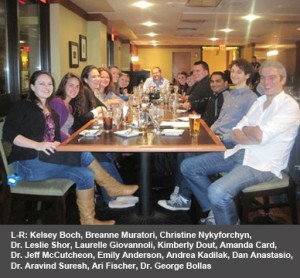 tion of the conference, UConn’s AIChE student members performed admirably.  Officers Breanne Muratori (chapter President) and Kimberly Dout (chapter Secretary) attended student leadership events, which they found to be informative and productive in terms of networking with fellow officers across the country.

Seven undergraduates participated in the undergraduate poster competition.  Emily Anderson (‘12), advised by Dr. Leslie Shor, was awarded first place in the Environmental Science and Engineering division for her poster, “Impact of Hydrogel Content on Water Retention in Soil Micromodels.”  Additionally, Breanne Muratori, advised by Dr. Jeff McCutcheon, gave an oral presentation entitled “Improving the Mechanical Properties of Activated Carbon Nanofiber Nonwovens.” It was one of only a handful of talks given by undergraduates at the meeting and reflects UConn AIChE’s dedication to better bridging the student section and the professional conference.

A bonus of Hurricane Sandy’s grounding of the group in Pittsburgh was that it enabled the undergraduates to stay a few extra days and experience the larger professional conference, including the university hospitality suites. UConn’s hospitality suite was a great success, with over 300 alumni and friends in attendance.  – Submitted by Daniel Burkey, Associate Professor-in-Residence, Dept. of Chemical, Materials & Biomolecular Engineering