Teams to Compete for $10k Prize

The Eurotech Club, the BRIDGE Program, and the Formula SAE team will participate in the Ignite challenge, UConn’s first crowd-funding competition. The three teams are among 20 that will have the opportunity to earn one of seven prizes, thanks to the generosity of alumnus David Barton ’61. The three groups will raise funds for their organizations during the dates of February 1, 2013 – May 3, 2013, and the Ignite challenge organizers will determine which of the contenders had the greatest number of student and young alumni donors (not sum of dollars) during that time period. The top team will receive the first-prize award of $10,000 for their fund at the UConn Foundation. The next six groups with the highest number of donors will be awarded $2,500 to their UConn Foundation fund. To donate toward one of these teams, please click here. To locate the full list of causes, please click the “Find a Cause” link in the left-hand menu  bar. 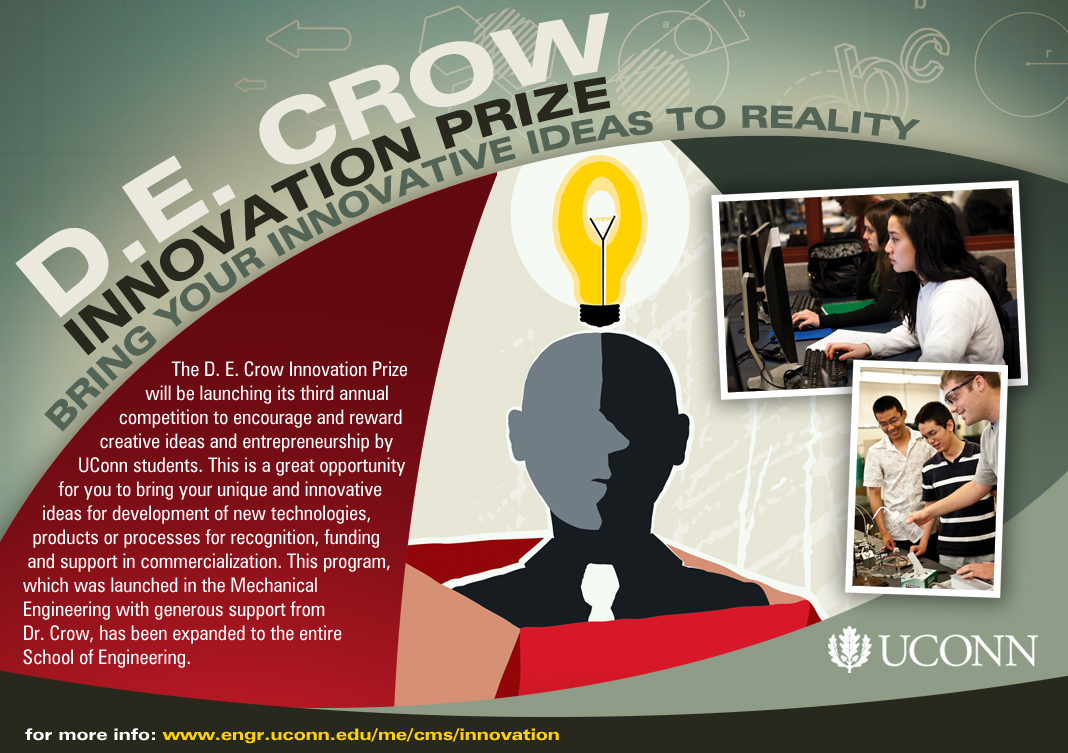 The D.E. Crow Innovation Prize will launch its third annual competition to encourage and reward creative ideas and entrepreneurship by UConn students.  Teams must have at least one engineering student to compete for up to $10,000 in prize money; teams are also encouraged to include at least one member who is pursuing a business degree.

Interested teams should submit a letter of intent (to innovation@engr.uconn.edu) summarizing their invention/innovation concept and listing the team members and their affiliations, by 5 p.m. on February 22, 2013.  An information session is scheduled for 3 p.m. on March 1. Please click on this link for additional details.

The competition is the brainchild of Dr. David E. Crow, former senior vice president of UTC Pratt & Whitney and emeritus professor in residence at UConn.  At Pratt & Whitney, Dr. Crow oversaw the design, development validation and certification of the company’s large commercial engines, military engines and rocket products. He also led research and development of advanced technology systems to meet future aircraft requirements.  Dr. Crow is a member of the prestigious National Academy of Engineering, the recipient of the School of Engineering’s Distinguished Service Award in 1999, a past secretary of the Society of Automatic Engineers and a member of both ASME and AIAA.  He received his Ph.D. from the University of Missouri-Rolla in 1972.