UConn Engineering Advisory Board member and Academy of Distinguished Engineers inductee Paul Adams has been chosen to succeed Pratt & Whitney president David Hess when Mr. Hess retires at the end of 2013.  Paul currently serves as chief operating officer of Pratt & Whitney.  When he ascends to the presidency, Paul will report to the chief executive of UTC Propulsion & Aerospace Systems, Alain M. Bellemare. A Hartford Courant news story noted Paul’s superb credentials to lead Pratt & Whitney through a challenging period as the company is “situated between current low production levels and the expectation of booming business just over the horizon. Right now, with spare parts orders low and the wrap-up of the company’s production of the military’s F-22 engine, the company has turned to cost cutting…But in the next few years, between the ramp-up in production from the military’s F-35 Joint Strike Fighter program and the increase in orders for Pratt’s commercial geared turbofan engine, the company expects its production to mirror levels not seen since the 1980s.” 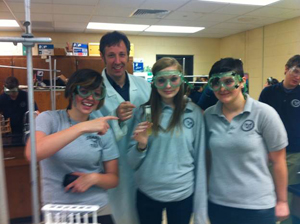 Justin notes that the project aims to demonstrate viable alternatives to gas-powered vehicles, lower greenhouse gas emissions and reduce the nation’s dependency on foreign oil. For their project, the Grasso Tech team will remove the conventional engine from a donated car, eliminate unnecessary weight on the vehicle, and install an electric motor connected to an advanced battery. When complete, the team expects its demonstration vehicle to be able to travel safely at highway speeds. Justin notes that successful completion of the conversion will position the team to seek funding for a fuel cell dual propulsion system.

Justin recently ‘graduated’ from the GK-12 fellowship; Ph.D. candidate and 2013-14 GK-12 Fellow Matthew Eschbach will serve as the project’s steward this academic year.

Under a grant from The Scientific and Technological Research Council of Turkey, three researchers from prestigious Turkish universities spent three months at th 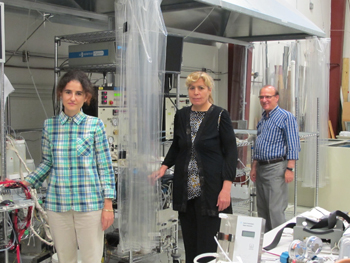 “Being able to observe and participate in the advanced research activities of Dr. Pasaogullari’s group at such a world class facility was a tremendous experience,” says professor Altinisik, adding “The help and support we were provided by students, faculty and staff of C2E2 made this experience a very pleasant one. In particular, C2E2 director Dr. Prabhakar Singh was always available and willing to help, and graduate students like Aman Uddin did not hesitate to share their valuable time to teach us.”  Plans for continuing collaboration are being developed with these universities, and some return visits have already being scheduled.