Ed Swindelles, a computer technical support consultant in the Engineering Technical Services unit, and Tiffiny Thibodeau, an administrative services specialist in the Civil & Environmental Engineering (CEE) department, were honored by UConn Engineering for their outstanding contributions in support of faculty, students and staff throughout the 2011-12 academic year and across their careers at UConn. 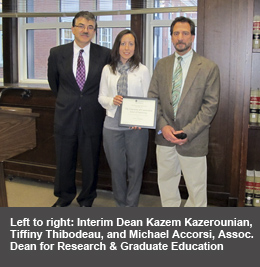 Ed and Tiffiny were among the staff members nominated by colleagues for their superior performance and attitude, and they received strong supporting letters from others in their units.

Tiffiny, nominated by Dr. Mekonnen Gebremichael, has been with the CEE Department since 2008.  Dr. Gebremichael lauded her for her contributions in support of the School of Engineering’s USAID-funded project with Ethiopia, which include hiring and travel arrangements for program instructors; equipment purchase and shipping; and student recruiting and selection procedures. Among those echoing the nomination was Dr. Amvrossios Bagtzoglou, CEE Department Head, who noted Tiffiny’s outstanding support to the CEE on a variety of critical activities. 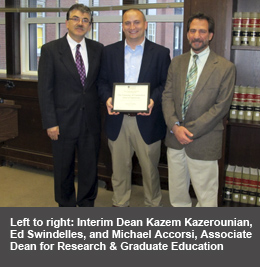 d by George Assard, Director of Engineering Technical Services, who said “Ed’s extraordinary success as a System Administrator and his willingness to reach outside his required duties for the sake of the school is creditable of this award. Ed’s technical skills, contributions, reliability, attention to details, willingness to help, and acceptance by all faculty and staff, make him an ideal System Administrator and this school is very fortunate to employ him.” Offering strong support of the nomination were Jeremy Pollack, Director of IT for the UConn School of Business and Tony Molloy, Team Leader of Information Technology Services for the UConn Libraries. 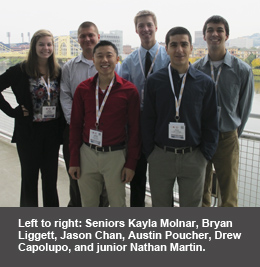 students were seniors Kayla Molnar, Bryan Liggett, Jason Chan, Austin Poucher, Drew Capolupo, along with junior Nathan Martin.  Among the activities in which they competed was a “mug drop competition,” in which they designed and manufactured a ceramic mug that – along with other teams’ mug entries – was dropped from increasing heights until breakage.  UConn’s students also attended presentations on exciting new research in areas such as additive manufacturing, biomaterials, sensors, nuclear materials and green manufacturing; and toured Carnegie Mellon university. 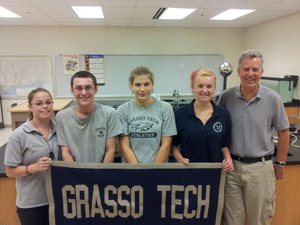 A team of Ella T. Grasso Southeastern Technical High School students mentored by GK-12 Fellow Jason White won an MIT InvenTeam grant of approximately $6,000 to construct a space heating unit powered by compost. The team will present their invention at MIT’s Eureka Fest in June 2013. The team’s system will be able to provide continuous heat to a greenhouse or small home, particularly in rural locales.  In describing their invention, the team explains that, due to the reduced production of heat from maturing compost piles, their system will incorporate multiple compost heating units into one system, where their life-cycles will be staggered such that heat will constantly be provided to the space. This invention will first be used to heat Grasso Tech’s greenhouse, where vegetables and herbs are grown to be used in the school’s cafeteria. Read about the MIT InvenTeam competition here.