ARPA-E Director to Speak at Commencement 2012

The School of Engineering will celebrate its undergraduate commencement on Saturday, May 5th at Gampel Pavilion in Storrs. The ceremony will officially begin at 9:00 a.m.

Full details, including suggested arrival times, parking, and photo details, may be found on our commencement website, which will be updated regularly with additional information.  Graduating students will be able to bring up to 10 ticketed guests.

A highlight of this year’s ceremonies will be guest speaker Arunava Majumdar, the nation’s first Director of the Advanced Research Projects Agency – Energy (ARPA-E).  He was appointed to the post in 2009 by President Barack Obama, and ARPA-E is the nation’s only agency devoted to transformational energy research and development. 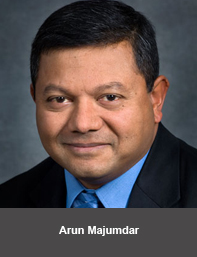 ARPA-E’s goals are to create technologies that have the potential to reduce the nation’s reliance on foreign energy supplies, reduce energy-related greenhouse gas emissions, and improve energy efficiency. The agency focuses on high-risk, high-payoff technologies that promise to transform the energy landscape, and under Dr. Majumdar ARPA-E has invested in projects aimed at producing better batteries for electric cars, cheaper and longer-lived photovoltaics, electrofuels, better catalysts for hydrogen production and improving the safety of nuclear energy.

Before joining ARPA-E, Dr. Majumdar was the Associate Laboratory Director for Energy and Environment at Lawrence Berkeley National Laboratory and a Professor of Mechanical Engineering and Materials Science and Engineering at the University of California, Berkeley. His highly distinguished research career includes the science and engineering of energy conversion, transport, and storage ranging from molecular and nanoscale level to large energy systems. In 2005, Dr. Majumdar was elected a member of the National Academy of Engineering for this pioneering work.

He received his bachelor’s degree in mechanical engineering at the Indian Institute of Technology, Bombay in 1985 and his Ph.D. from the University of California, Berkeley in 1989.