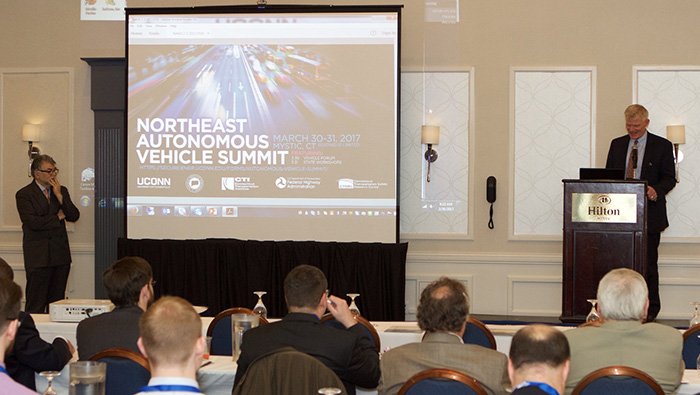 Officials from the University Of Connecticut, the Connecticut Department of Transportation, the Federal Highway Administration and a number of industry leaders recently came together for the Northeast Autonomous Vehicle Summit to discuss how self-driving cars will move forward.

UConn Engineering Dean Kazem Kazerounian kicked off the event. He discussed the impressive scope that autonomous vehicles will have on society.

“This is a technology that will change our lives in so many ways that we cannot predict them all,” Kazerounian said. “It’s one of the key technologies that two or three decades from now, our grandchildren are going to look back and say ‘that technology redefined our lives.’”

A number of speakers mentioned the transformative potential of vehicles that don’t need a driver, with safety a common benefit. Tom Maziarz, the chief of policy and planning for the Connecticut Department of Transportation, compared the introduction of driverless cars to the introduction of cellular phones.

“Some of you may recall, the first use of mobile phones were often called car phones because they were installed in your car. They were primarily installed because of concern about the safety and security of stranded motorists… what has evolved from something that started as a simple safety measure has affected almost every aspect of our daily lives,” Maziarz said.

A bumpy road to safer cars 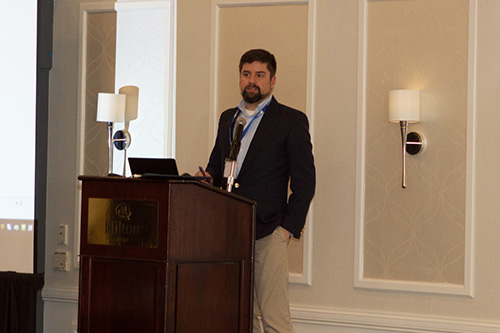 Currently, 94 percent of car crashes are the result of human error. With a 360 degree field of vision and refined driving algorithms, the autonomous vehicles of tomorrow could significantly decrease the 42,000 automotive deaths every year. Cathy Rossi, the vice president of public and governmental affairs with AAA Mid-Atlantic, said that one of the issues that leads to human accidents is the gap between behavior that people find unacceptable in theory and their actions in practice.

“Drivers effectively demonstrate a ‘do as I say, not as I do’ attitude… Nearly all drivers say that reading an email or a text is a serious threat to their personal safety, and they find it unacceptable for another driver to do. Yet 40 percent admit to having read a text in the last 30 days,” Rossi said.

Much of the conference dealt with the issues that must be addressed to make autonomous vehicles widely accepted and safer than human drivers. Rossi pointed to public perception of autonomous vehicles as one area for improvement, with a recent AAA survey finding 75 percent of drivers having some fear of automated vehicles.

Josh Hartung, the CEO and Co-Founder of PolySync outlined some of the issues that need to be addressed to make driverless cars safe.

“The question we’re trying to answer collectively as an industry is ‘what is safe enough?’” Hartung said.

To demonstrate what he meant by that question, Hartung played a short video of an airplane landing at an intersection, which drivers were able to avoid. Currently, it’s the human driver that has to adapt to odd scenarios like that. It’s unlikely that a computer would be programmed to deal with something so uncommon as an aircraft landing on a road, but determining where that line is drawn- how rare a safety issue must be before a self-driving car is designed to deal with an issue- is what Hartung was talking about.

“On some of the major streets, we have self-driving cars going up and down the streets all the time,” Gerdes said. So it ceased to be a matter of ‘have you seen one of the cars?’ which was the cool thing about three years ago. Now the cocktail party conversation is ‘can you believe they’re only going 25 miles per hour down this street?’”

Does a driverless car need a driver’s license?

Amy Jackson-Grove, the division administrator of the Connecticut Division of the Federal Highway Administration, moderated a session about the complex regulatory issues that automated vehicles can represent.

“I just want to acknowledge that this is a very complex issue. It has a lot of different legislative and policy parts to it […] It comes down to liability, to safety, to people issues,” Jackson-Grove said.

The current federal guidelines for automated vehicles, the Federal Automated Vehicles Policy, was published by the National Highway Traffic Safety Administration in 2016. Peter Calcaterra, Transportation Planner with the Connecticut Department of Transportation, broke down those guidelines.

“These are guidelines, not mandates. They provide recommendations, not strict rules for the states and industry to follow. At this point, that does two things. It allows industry and states to continue to innovate and be creative and it speeds up the state and national framework for developing innovations,” Calcaterra said.

Jim Hedlund, principal with Highway Safety North, has published over 60 research studies, including Autonomous Vehicles Meet Human Drivers: Traffic Safety Issues for States. He spoke about the need for states to maintain a balancing act between driver safety and rigorous testing of autonomous vehicles.

Hedlund also discussed the difficulty DMVs could have with autonomous vehicles, particularly since there are different levels of automation. As systems that are partially automated become more prevalent, a special requirement for partially automated vehicles could be possible, he said.

“I want to thank UConn for what their leadership has led to, which is this kind of interest and participation. UConn and DOT have been trying very hard to pull together a really strong partnership because transportation is so critical,” Redeker said.