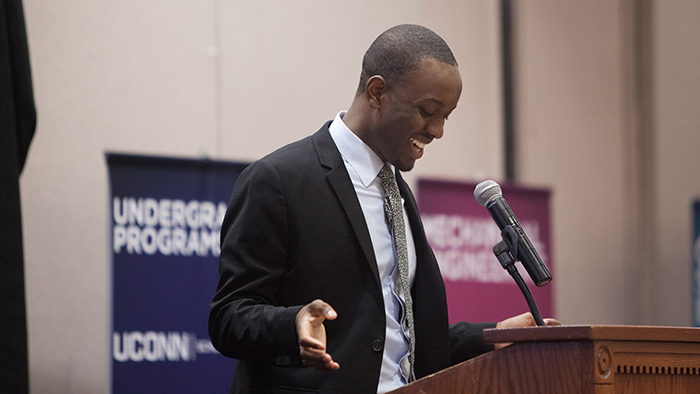 Joshua Crittenden, an environmental engineering junior and the president of the UConn chapter of the National Society of Black Engineers, spoke at the Annual Scholarship Award Dinner. (Defining Studios)

Every year, the School of Engineering hosts its annual Scholarship Awards Ceremony, where students take center stage and their hard work is acknowledged. This year, as UConn Engineering celebrates its Centennial with a pledge of 100 new undergraduate scholarships, the focus on students continues to grow stronger. 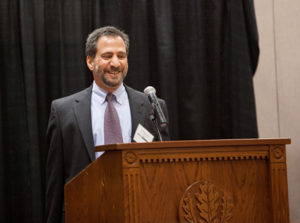 Senior Associate Dean of Engineering Michael Accorsi pledged to create one of those new scholarships. He congratulated the students at the event for excelling in a difficult field of study.

“This is a demanding major. If you’re receiving a scholarship, that means you have distinguished yourself among all the students here, and that is quite the accomplishment,” he said.

Joshua Crittenden, an environmental engineering junior and the president of the UConn chapter of the National Society of Black Engineers, is one of the students who has distinguished himself. Crittenden spoke about his journey to engineering- he began as a geography major. He initially dismissed engineering because he was reluctant to take four more years of math courses. Crittenden took part in the BRIDGE Program, a five-week long intensive summer course that helps underrepresented students transition to university engineering and science courses.

“One of the things that made me start to consider engineering was the BRIDGE Program,” Crittenden said.

After his experience with the BRIDGE Program, Crittenden switched to natural resources as a major, but also became more active in the School of Engineering’s Diversity and Outreach Center, where he would volunteer at events and promote engineering to middle and high school students.

“While I was helping to volunteer at those events, I was inspiring myself too,” he said.

Crittenden eventually talked with Kevin McLaughlin, the director of the Diversity and Outreach Center, about the possibility of transferring to engineering. McLaughlin encouraged Crittenden that with hard work and the support system at UConn, Crittenden could excel. He switched to engineering his sophomore year.

Crittenden said that he hopes to give back to his community.

“Being in environmental engineering, being a person of color in the environmental field, you don’t see a lot of us. That’s an issue in the sense that you see these environmental issues happening in communities of color, such as Flint […] . One of the things I want to do is give back to my community.” 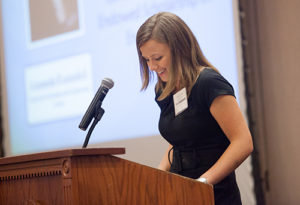 Georgina Talbot, president of the UConn Engineers without Borders Chapter and a senior in civil and environmental engineering. (Defining Studios)

Georgina Talbot was the other student speaker. She is a civil engineering senior and the president of the UConn chapter of Engineers Without Borders, or EWB. Talbot talked about the strong impact that engineering can have when used for the benefit of society. The UConn EWB chapter is working with a community in Woreta, Ethiopia to improve their irrigation system and help the community cope with a nine-month dry season.

“I am so proud of what we have all achieved in the past year as this project accelerates and I am looking forward to the group embarking on their implementation trip this winter,” she said.

Talbot also spoke about how the previous year she had worked two jobs in addition to extracurricular projects and her engineering studies. The scholarship is allowing her to focus more on her studies in her senior year.

UConn Engineering Dean Kazem Kazerounian encouraged the scholarship winners to acknowledge the people who have helped them reach this point in their lives.

“A great many people have assisted you in your journey. Top among them your parents  and your families, but also the wonderful staff and faculty at the school of engineering. I ask in every opportunity that you find, seek them out and express your gratitude,” he said. 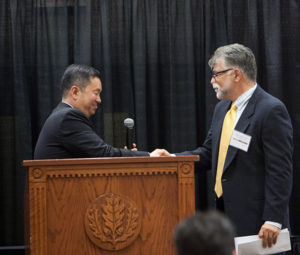 “We wouldn’t be here without our sponsors- corporate sponsors to individual donors- who want to give back to the next generation,” Choi said. “When you are their age and when you are of financial means to make a difference, think about making a contribution to the University of Connecticut or any other organization that provides opportunities for the next generation to pursue their dreams.”

“It’s not about the salary, it’s about the pride and responsibility that you all have […] to contribute positively to society,” Di Perna said. 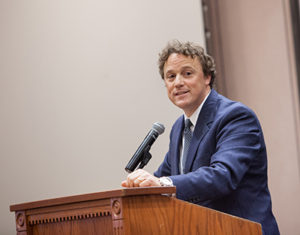 Di Perna also suggested that students take their time, and not advance too fast- that it’s more rewarding to be an engineer than it is to be a manager.

Senior Associate Dean of Engineering Michael Accorsi said he first fell in love with engineering in statics class, learning how Newton’s laws are applied. Accorsi then paraphrased a story about Newton from Richard Westfall’s biography. Newton came from humble beginnings, and first went to Cambridge as a servant while also studying. He came into his own when he got a scholarship, which allowed him to focus on his studies and not worry about his place at the university.

“Newton now received room and board from the college, and a stipend. More importantly, he received the assurance of at least four more years of unrestrained study. The threat had been lifted. He abandoned himself completely to the studies he had found.  The tentativeness suggested by his early, unfinished notes vanished, to be replaced by the passionate study of a man possessed.” Accorsi said.