Back on Earth, and Back on Campus: Astronaut Rick Mastracchio Talks About Life in Space 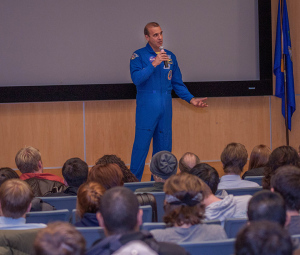 Rick Mastracchio talks to the crowd at the Student Union Theater

Astronaut and UConn alum Rick Mastracchio was on campus recently, where he spoke of the virtues of persistence, staying in touch with family while you’re in space, and chasing his breakfast on the International Space Station

Mastracchio’s visit comes about six months after his commencement speech to graduates of the School of Engineering. He made that speech from space, and made international news in the process. At the Student Union Theater on Tuesday, he was fully present and down to Earth.  His hour-long talk touched on everything from the harrowing (unplanned, urgent spacewalks), to the perils of eating in zero gravity – “Broccoli was the worst! We’d have to chase it down and scrape it off the walls!”

Mastracchio, who grew up in Waterbury, graduated from UConn with a bachelor’s degree in electrical engineering and computer science. He began his career with Hamilton Standard, which is now UTC Aerospace Systems. In the 1980s, he transferred to Houston, where he supported 17 NASA missions as a flight controller. He came to UConn ith his wife Candi and several other family members.

During this most recent stay aboard the International Space Station, Mastracchio conducted three spacewalks. The first two were to remove and replace a faulty cooling pump, and the third to remove and replace a failed backup computer relay box. During the expedition, the crew completed 3,008 orbits of the Earth and traveled more than 79.8 million miles, returning to Earth after 188 days in space. His talk was accompanied by a 20-minute video of that stay on the Space Station, which included bringing the torch for the 2014 Sochi Olympics on board.

Mastracchio’s career has entailed traveling a literally astronomical 5 million miles, and he has logged 228 days in space spanning four missions – including nine spacewalks totaling 53 hours. Yet it began in an ordinary enough fashion: with a want ad. “Astronauts wanted,” it read. Mastracchio applied, and was one of about 100 selected for interviews, and he was turned down. He persisted in his attempt to become an astronaut – with similar results – for nine years. In the meantime, he built up his resume and acquired a pilot’s license. Eventually, he got the call from NASA telling him that he was selected. Today, after all he’s been through as an astronaut, he still considers that the most exciting moment of his career.

Mastracchio’s talk demonstrated not just his persistence but a boundless curiosity. He spoke of his fascination watching a group of ants on the Space Station. “Some flailed about, and others were more cautious – I don’t know why!” 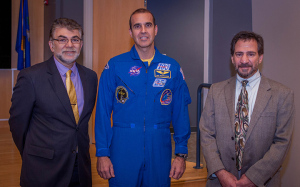 One takeaway from the talk is that pretty much everything is amazing in space. The video showed Mastracchio gliding through the Space Station, effortlessly carting a 200-pound bag of trash. “It’s a lot more fun to take the trash out in zero-G,” he said. “It kind of takes itself out.”

The theater was packed, mostly with students. Mastracchio spoke with many of them before the talk, often posing for photos with them. He also answered questions from the crowd. Asked if he was “terrified” the first time he went into space, Mastracchio said he wasn’t, thanks to his years of preparation. “If you know what’s going to be on a test, you’re not nervous,” he said.

As for communicating with his family, it has gotten surprisingly easy. Email once took a day to deliver and another day to receive a response; now it only takes a few minutes. The Space Station is equipped with a phone that can call anywhere in the world, and soon, astronauts will be able to use Skype whenever they want. “When I was in space, my son said ‘I talk to you more now than when you’re home.’”

“Any plans to go back?” a student asked.

“Well, I’m definitely still eligible,” he said. But there are a number of people in his office who haven’t gotten any space experience, he said, and aren’t so eager to have Mastracchio make a another trip into space. “They want their turn,” he said.