What happens when you mix UConn’s famous Creamery and its top-notch Chemical Engineering department? If things go right, you get an ice cream that forgoes traditional sugar, but still earns a place along the famously delicious ice creams at the Dairy Bar. 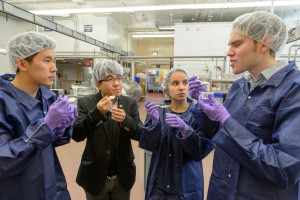 That’s the goal of two student teams working toward Senior Design Day. That event, May 1, is when students in the School of Engineering present their work toward solving a particular problem.  Both teams are working with advisor Dr. Anson Ma, assistant professor in the Department of Chemical and Biomolecular Engineering and the Institute of Materials Science.

One of the teams met on a recent morning at the UConn Department of Animal Science Creamery in the George White Building. This is where UConn’s ice cream is produced and later sold at the Dairy Bar next door. Bill Sciturro, manager of dairy manufacturing in the Department of Animal Science, helped the team work the batch machine, which freezes the mixture into ice cream. The aptly named machine makes one batch at a time – no more than a half gallon – and is used for testing purposes. Once a new recipe meets Creamery standards, it goes into production and is made with the continuous machine, which operates on a minimum of 50 gallons.

Instead of cane sugar, this team is using erythritol, a natural sweetener derived from corn. They did so after surveys indicated a demand on campus for ice cream with alternative natural sweeteners. Erythritol is up to 70 percent as sweet as table sugar and has almost no calories. Most ice cream companies would call this “sugar-free” for marketing purposes. The students call it “reduced-sugar” because they’re scientists, and they’re counting the sugar that already exists in the milk. Get rid of lactose, they say, and you’re working with a whole other set of circumstances. 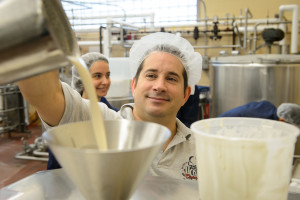 Ice cream’s semi-solid state is the result of a fragile balance of ingredients, and it’s no easy trick to replace old-fashioned sugar and still get the rich taste and texture that makes the Creamery’s ice cream so popular.

“It’s difficult to change the solids, because that changes the freezing point – and that determines the way it behaves as an ice cream,” said Nicholas Fleming, one of the three team members. Too many salts and carbohydrates, he said, and the freezing point becomes too high for conventional freezers. To get it right, the team did a lot of experiments and calculations with heat transfer and ice recrystallization to see how their product fared with the Creamery’s current storage practices.

Considering the complexities of ice cream’s make up, Ma said he is impressed by the students’ achievements so far. “Both teams have applied what they have learned in their engineering classes to arrive at their final recipe, while being cognizant of the 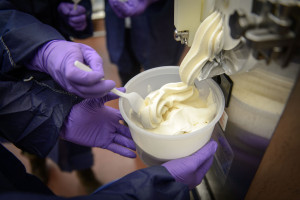 So why ice cream? Ma said using examples from everyday life is one of the most effective ways to engage the younger generations and the general public in science. “The ice cream project really satisfies my passions for education, research, and food simultaneously!” Ma says.

After finishing the first batch at the Creamery, the team handed out samples to a few observers. Even at the very non-ice cream hour of 9 a.m., it proved a tasty snack – smooth, creamy and betraying no indication of a non-traditional sweetener. At least to the casual observer. The team members were glad that the erythritol left no chemical hints or after-taste, but they agreed that the batch could use more vanilla. Team member Anh Nguyen said his ice cream palette has become a good deal more discriminating since the start of the project.  “I’m a lot more picky,” he said.

For the next batch, team member Leonora Yokubinas was a little more generous with the vanilla extract, which she poured from a gallon jug into a graduated cylinder. They reach a consensus after a second taste test: erythritol-based ice cream is just about consumer-ready.

Ma’s other student team is using Splenda – an artificial sweetener derived from sugar. Team member Ivan Nguyen said they chose Splenda because it is FDA approved, and has fewer harmful side effects than other artificial sweeteners (such as Aspartame and Acesulfame Potassium). It’s also 600 times sweeter than sugar, so they don’t need to use much. This also means that there is less solid content in the base composition, however, so large ice crystals can form and make for a less creamy texture.

To address this issue, the team is flash-freezing their mixture with liquid nitrogen. This, they say, allows for some flexibility with the ice cream’s base composition because it freezes the ice cream quickly enough to form extremely small ice crystals – the key to maintaining a smooth texture. They use stainless steel Popsicle molds with 75 mL of the ice cream mix, which are dipped into a Styrofoam container filled with liquid nitrogen for 3 minutes. They then run the molds under hot water to melt the outside layer of ice cream so they can easily be removed. Popsicle sticks are then added to the mix before it freezes, for easier handling.

Sciturro’s just as invested in these projects as the students; the Dairy Bar could use a low-sugar option. They haven’t offered one in the past, but Sciturro said there have been requests. Rarely do people go to an ice cream parlor specifically for a low-sugar treat, he said, but if someone with special dietary needs comes with their family then it’s great to have that option. “After all, who doesn’t know someone who has a need for low-sugar foods?” he said.