Beyond Senior Design: Bringing Hospital Communications into the Future 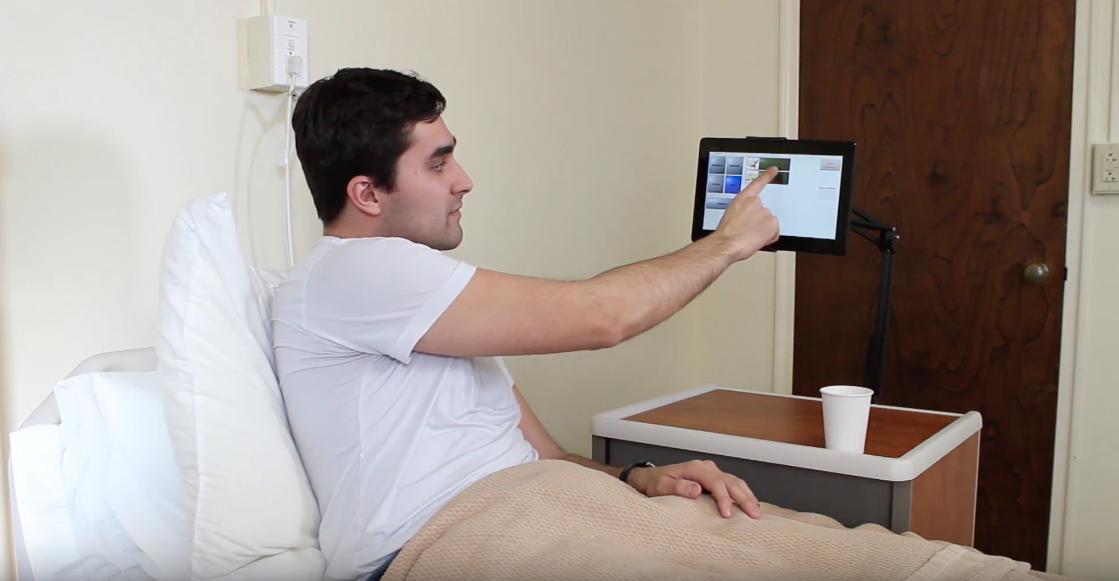 Hospitals are one of the busiest places that an individual can be in. Doctors and nurses are running around, often supervising many patients, and during hectic times caregivers are confronted with the task of prioritizing patient’s needs, which is a very complex process. But two former UConn Engineering students are looking to streamline patient-caregiver interactions through a device called YouCOMM.

The device, which is being developed by two recent engineering alumni, Tom Cotton (B.S. BME ’17, M.S. BME ’18) and Daniel Yasoshima (B.S. BME ’17, M.S. BME ’18), is a tablet-based platform with an interface allowing the patient to choose their problem or need from a list, or write a custom message to the caregiver. Once completed, that message is sent as a text message directly to the caregiver assigned to that patient.

Additionally, head movement tracking technology allows patients who are unable to move, from IV’s, pain, or paralysis, the ability to send messages hands-free, translating their head movements into the motions of the cursor on the screen. This feature is voice activated and the device also can be interacted with via voice recognition technology.

Cotton and Yasoshima originally conceived the idea for the device when they developed it as a Senior Design project, the year-long project requirement for all UConn Engineering seniors, in 2017, according to Yasoshima:

“The Senior Design process started with a Pitch Night about a month prior to the conclusion of our junior year. Pitch night consisted of several faculty members and mentors introducing projects, and students chose the top three that they were interested and were assigned one of them. This project was pitched by BME Professor Patrick Kumavor and was titled “Augmentative and Assistive Communication Device,” with the goal of addressing the issues involved in therapy for patients with limited communication.”

After that night, Yasoshima said that the team was determined, and went on a roll:

“Throughout the summer, we brainstormed potential ways to improve communication, and once classes resumed, we had decided a tablet app would be the way to go. As we developed the project, we thought of ways to expand it towards a larger target audience, and decided to create features for patients with motor impairments, which is when we incorporated the handsfree option. Our project was starting to look promising, and we demonstrated at Open House, at the Northeast Bioengineering Conference, and at Senior Design Demo Day, and received very high praise from students, parents, professors, and the biomedical engineering department head.”

The novelty of this device is quite important to a healthcare system that has developed medical technology at a lightning pace, but still suffers from a lack of technology geared towards improving the patient-to-caregiver communication process. Currently, hospitals employ call-bell technology that is decades old, which doesn’t give a clear signal of priority or need, according to Cotton:

“This device further enables patients to indicate their specific needs and thus allows nurses to prioritize which patient rooms to visit based on need criticality. Nurses won’t have to enter a patient’s room to determine a patient’s need (consider the simple example of fetching a glass of water), then leave and return again to finally address it,” Cotton said. “Utilizing our device, they will know the need in advance and will arrive equipped to handle it. It’s been shown in several studies that response time is directly correlated to increased patient risk (e.g. of falls), and implementation of this time-saving device can therefore decrease patient risk.”

Those precious seconds or minutes could literally mean life or death for a patient that is unable to move or properly communicate their needs. According to a recent study, the average response time to a call-bell was 13 minutes and 18 seconds, which doesn’t even factor in the back-and-forth that occurs after the caregiver enters the room.

Since their senior year, Cotton and Yasoshima have been on a mission to commercialize their device. In the past year, they have filed a provisional patent application with the help of the Accelerate UConn program and the UConn Law Clinic, and have received about $35,000 funding from multiple sources. They have also performed a successful pilot study at UConn Student Health Services and are aiming to incorporate this device into UConn Health, Connecticut Children’s Medical Center and Wilton Meadows Rehabilitation Center later this year, in three parallel large-scale trials. Cotton and Yasoshima have since formed a company, YouCOMM LLC, where Cotton serves as the COO and Yasoshima as the CEO. 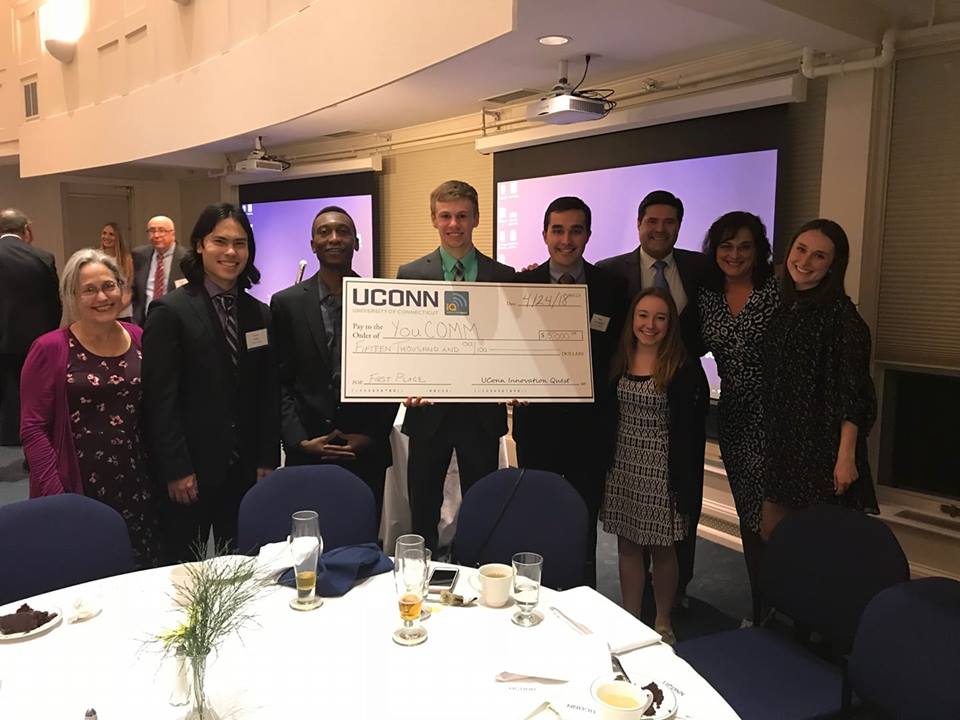 The two co-founders, and their faculty advisor, Dr. Patrick Kumavor, display their first-place award from the 2018 UConn Innovation Quest Competition.

Looking back, Cotton said that without the experience he and Yasoshima gained from their Senior Design project, they probably wouldn’t be where they are today:

“It’s easily the single most valuable experience I had during my education at UConn. Senior design – and the continuation of our project into our graduate year – has given me an extensive understanding of the variety of different processes required in bringing a product to market. I learned about regulatory pathways, how to obtain grant funding, how to budget a project and focus on downstream goals while also maximizing the effectiveness of my available resources in the present.”