Boosting Business in the ‘Quiet Corner’ 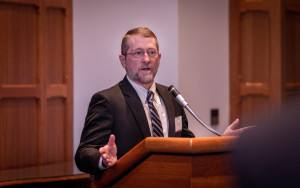 UConn is launching a new partnership to provide R&D support to companies in the eastern part of the state. Lawrence Silbart, UConn vice provost for strategic initiatives, spoke at an event on March 22. (Chris LaRosa/UConn Photo).

UConn launched a center to connect small and medium-sized technology and manufacturing businesses in Eastern Connecticut with the University’s resources and outside partners, after the Economic Development Administration agreed to fund a portion of the $1.5 million startup costs.

The grant funds the Quiet Corner Innovation Cluster (QCIC), which will help develop companies in New London, Tolland, and Windham counties. This largely rural area has been affected by the loss and stagnation of local manufacturers, many of whom don’t have the R&D capabilities to cope with rapid advances in technology. Through the QCIC, UConn will work with local companies to develop new products and update business opportunities for manufacturers in the eastern part of the state.

“The Quiet Corner Innovation Cluster is an exciting opportunity to provide support to employers in an area of the state hit hard by our changing economy,” says Kazem Kazerounian, dean of the School of Engineering. “Smaller manufacturers just don’t have the budget for R&D. Between our first-class research and our strong ties to larger manufacturers – who are often their customers – UConn Engineering is in a great position to provide that aid.”

The Economic Development Administration is an agency within the national Department of Commerce that provides support for economically distressed communities. The EDA grant was one of 25 awarded in a nationwide competition, to advance innovation and build the capacity of existing businesses. Connecticut Innovations, UConn, and the Economic Development Administration will each contribute $500,000 to the QCIC.

“This initiative encourages the type of collaboration that is needed in our state,” says Matt McCooe, CEO of Connecticut Innovations. “It allows small and medium-sized employers to access UConn’s valuable resources to help businesses enhance their research and development capabilities. We have found that companies that receive this type of support early on have a much better chance of succeeding in the future.”

Manufacturers that participate in the QCIC will gain access to UConn faculty and facilities. UConn will also serve as a supply chain hub, connecting these small and mid-size 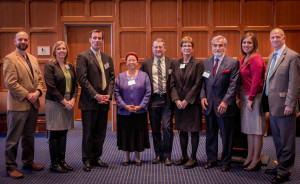 “The new Innovation Cluster is a great example of what Next Generation Connecticut and the Technology Park Project represent to the economic development of our state,” says UConn Provost Mun Choi. “This project will help to support innovative R&D and training for an important manufacturing region of Connecticut.”

This is the first UConn program aimed at partnering with small and medium-sized technological manufacturers.

“Smaller manufacturers can be incredibly important to local and regional economies, but they’ve traditionally been underserved by partnerships with higher education institutions,” says Hadi Bozorgmanesh, co-executive director of the School of Engineering Entrepreneurship and Innovation Consortium. “This will give them access to the first-class research, development, and commercialization UConn Engineering is known for making.”

The QCIC plans to launch a pilot program by August 2016.