The legacy of the School of Engineering’s annual summer BRIDGE program, offered for accepted freshmen who are designated as underrepresented populations in engineering, is best understood through the lasting relationships BRIDGE students form among their peers and among their tutors. The tutors, current engineering students who themselves graduated from the BRIDGE program, volunteer five weeks of their summer to helping a new group of entering freshmen. 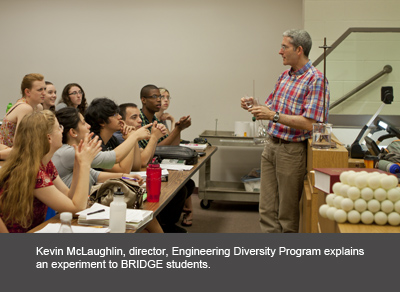 Their motivation?  Personal experience. As BRIDGE participants, they were helped immeasurably by a mentor, the coursework itself or the strong community that emerges each year among fellow students, tutors and teachers, according to Kevin McLaughlin, director of UConn’s Engineering Diversity Program. “That’s why [the tutors] love doing what they do, they know the impact first-hand.”

Each year, BRIDGE enrolls about 50 students. The program is reserved for students who have been admitted into the School of Engineering and reflect underrepresented groups in engineering, including women, African Americans, Hispanics, Puerto Ricans and Native Americans.

McLaughlin said a handful of students have chosen to attend UConn solely based on the opportunity to attend BRIDGE, including a student who chose UConn over Cornell because he felt that the program would help start him off “on the right foot.”

“Kids at urban high schools may not get the same curriculum advantages,” McLaughlin said. “We help them review math and science subjects and get started in programming. Very few high school kids have any experience in programming.”

The program consists of 120 hours of coursework in math, physics, chemistry and computing, intensive study sessions and plenty of homework. McLaughlin said that instructors often refer to BRIDGE as “boot camp.”

While navigating tough coursework, the unfamiliar college environment and high expectations, many BRIDGE students experience bouts of self-doubt.  McLaughlin recalled taking time this past summer to speak with a BRIDGE student who was struggling to adjust to the demanding nature of the coursework.

“One hour later, he walked out a new guy,” McLaughlin said. “I had tutors coming up to me saying, ‘Kevin, a miracle happened.’ Now he’s one of the biggest volunteers we have in the school [of engineering].”

Delaney Turner, a freshman studying biomedical engineering and planning to attend dental school, graduated from BRIDGE this past summer. “You get to know Kevin,” she said of McLaughlin, who teaches the Introduction to Engineering course each semester. “He’s such a visible professor in the engineering department.”

“The class he teaches has 300 people in it, but he knows your face and your name,” Turner said.

The student mentors also make an impact on BRIDGE participants. “The tutors are all great,” Turner said. “It’s not a superiority thing; they talk to you as a friend.”

And the rigorous coursework has definitely given her an advantage in the classroom. “Where it counts toward my GPA, I know what I’m doing,” Turner said. “I definitely feel that I have an edge. Everybody knows us as ‘the BRIDGE kids’ because we all know what we are talking about.”

For Carolyn Williams, who attended BRIDGE with Turner and is an environmental engineering major, BRIDGE helped her zero in on her career goals.

“Originally I was in biomedical engineering,” Williams said. “BRIDGE helped me focus on environmental. We learned a lot about the different types of engineering and I realized what I was interested in.”

As a result, BRIDGE is pivotal in constructing a support network between peers. “When you’re a member of an underrepresented group, you question, ‘Do I belong here?’” McLaughlin said. “To have a support network that is somewhat similar to you can help you survive and push through when it gets tough.”

“We all feel like we are one big family,” said freshman Kevin Kubi, a management and engineering for manufacturing major who participated in BRIDGE this past summer. “Coming into UConn this fall, I already had a support network of friends.”