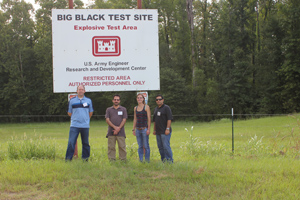 Researchers in the Department of Civil & Environmental Engineering are testing a new style of bridge column construction with an eye to developing next-generation columns capable of withstanding catastrophic events such as earthquakes, explosions and fires.  The project, which entails a number of allied sub-projects, is led by Drs. Arash Esmaili Zaghi and Richard Christenson with first-year master’s degree student Alicia Echevarria.

Across the U.S., more than 600,000 bridges link travelers to millions of roadway miles and form a critical part of the nation’s infrastructure. Unsurprisingly, they are also of keen interest to the U.S. Department of Homeland Security, which funds cutting-edge research in various aspects of structural integrity testing and blast-resistant structural design.  Bridges are typically more vulnerable than roadways to damage precipitated by natural and man-made hazards.

With the aim of developing next-generation bridge columns capable of supporting vehicular traffic even after they have been exposed to extreme blasts, the research team is conducting a series of large-scale tests that will provide quantitative, objective performance data for concrete columns of conventional and a promising alternative design.  The research is supported by UConn’s HS-STEM Program, which is administered by the Center for Resilient Transportation Infrastructure and funded by the U.S. Department of Homeland Security Science and Technology Directorate/Office of University Programs.

Most U.S. bridge columns rely on a traditional reinforced concrete (RC) design.  Alicia and Dr. Zaghi are studying a new column design that features concrete-filled fiber reinforced polymer (FRP) tubes (CFFT) made of an off-the-shelf composite tube with a concrete core.  The design was originally proposed by Dr. Amir Mirmiran at FIU and later tested by Dr. Saiid Saiidi and Dr. Zaghi on shake tables at UNR (view a video here). The specialized NOV Fiber Glass piping system is composed of epoxy resin and glass filaments, and the pipes have been used in the oil and gas industry for years, where they have proven extremely durable in varied environmental conditions.

In the Structural Research Laboratory at UConn, a large, high-bay lab with specialized equipment, assembly and testing capabilities, Alicia and Dr. Zaghi began their project by designing and constructing 10 one-fifth scale test bridge columns, five each of the conventional RC design and the experimental FRP/CFFT construction.  The conventional reinforced concrete (RC) columns comprised longitudinal steel bars to which Alicia tied a wire spiral that provides lateral reinforcement and confinement for the core concrete.  Strain gauges were added before the rebar cages were placed within tubular forms. Concrete was poured into the forms and left to cure.

For the FRP/CFFT columns, the team used fewer longitudinal bars and no spiral. The NOV Fiber Glass tubes were placed over the rebar cages, and concrete was poured into each of the five composite tubes. With Dr. Zaghi’s oversight, Alicia designed the blast test frame, which allowed the researchers to capture a range of data from the columns during and after the blasts, including strain, free field pressure, mid-span displacement, and load. The recorded data will provide the team important insight about how each of the test columns responds to varying blast levels. 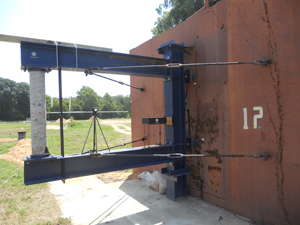 The frame was fabricated in the machine shop at UConn and shipped in pieces, along with four of the columns (two each of the conventional and FRP/CFFT designs) to the U.S. Army Corps of Engineers’ Engineering Research and Development Center (ERDC) in Vicksburg, Mississippi.  ERDC supports various missions of the U.S. Army, the Army Corps and other agencies, and it is one of just a few installations in the country where explosives testing can be carried out by researchers.

Across eight weeks at ERDC, Alicia used a variety of software packages to determine the blast parameters to be used for each of the tests, and to develop a predictive model of the blast effects on the columns.  During this time, ERDC engineers and blast specialists – under the oversight of Dr. Vincent Chiarito – assembled the test frame set up the data acquisition system, advised the team and helped to establish the blast parameters.  On the day of the blast tests, the UConn research team was joined by ERDC personnel as well as Thomas Coleman of the U.S. Department of Homeland in witnessing the spectacle, a portion of which may be viewed in this short video.

The four columns, the research team, and volumes of data arrived back at UConn in late summer. The project team was impressed with the performance of the FRP/CFFT columns which, according to Dr. Zaghi, show no outward signs of damage even after having been exposed to a significant level of explosives.  Alicia has begun the challenging task of processing the data and modifying the OpenSees model to better predict the columns’ responses to experimental blast loads.

Meanwhile, a second group of four columns will soon be shipped to the Guardian Fire Testing Laboratory in Buffalo, NY, where they will undergo lengthy exposure to extreme fire before returning to UConn for assessment of their residual capacity and other investigations.  Of the 10 original columns, one each of the RC and FRP/CFFT construction will serve as controls; these columns were not exposed to explosives or fire and will provide important benchmark data relative to the residual load capacity of damaged column.

After the fire-test columns return to Storrs, the research team will subject all 10 columns to tests aimed at determining their dynamic characteristics and residual load carrying capacity (post-damage for the eight test columns).  In the Structural Research Laboratory, one piece of critical equipment that is hard to miss is a massive 30-foot tall 400-kip load frame. Each of the columns will be installed in the load frame and gradually pushed against a plate to the point of failure, when the column is crushed.  The test is meant to quantify the residual capacity of the columns after being subjected to different levels of blast or fire damage.  The data gathered from this and the previous tests will allow the team to determine how well the next-generation FRP/CFFT column design withstands extreme events relative to the traditional RC one.

Another facet of the research project entails the development of reliable techniques enabling officials to rapidly assess the structural integrity and load carrying capacity of damaged bridge columns and to determine their ability to safely carry traffic post-damage. Supervised by Dr. Christenson, the team is working on a “modal hammer” test methodology that first responders could use to judge bridge carrying capacity.  After an explosion, fire or earthquake, first responders could strike bridge columns with the special hammer and obtain the dynamic characteristics of the column.  Depending on the pattern, officials would be able to quickly decide whether the bridge is safe to continue carrying traffic loads.

Long range, Dr. Zaghi and his collaborators are also reviewing ways to improve the NOV composite tube to further enhance its strength and resiliency.  Dr. Zaghi anticipates the FRP/CFFT column design offers many advantages beyond superior strength and resilience, including the fact that columns can be poured on-site with fewer or no steel rods, and can provide a self-curing environment, bringing engineers closer to the goal of accelerated bridge construction (ABC).

For Alicia, the opportunity to design, construct and blast columns, master cutting edge blast loading software to model explosive forces, conduct myriad tests and tease out the meaning of massive amounts of data, has been interesting and challenging. “The work I have done, or will complete by the time I graduate, gives me a very diverse background in multi-hazard structural engineering, so I could see my career following any of those paths in structural design.”