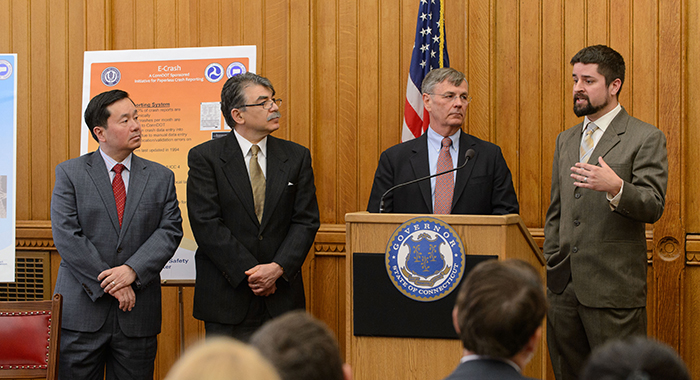 From left are are Provost Mun Choi, Kazem Kazerounian, Dean of Engineering, James P. Redeker, commissioner of ConnDOT and Eric Jackson, assistant research professor. This picture was taken on April 29, 2013 at a press conference to announce the formation of the Connecticut Transportation Safety Research Center. (Peter Morenus/UConn Photo)

Connecticut is in the middle of a quiet revolution in the way it handles data from traffic crashes around the state, and UConn is at the forefront of the transition.

“Our goal is to give the Department of Transportation the tools they need to prevent crashes from happening in the future and make the transportation network safer,” said CTSRC Director Eric Jackson.

ConnDOT, together with CTSRC, was recently awarded the Association of Transportation Safety Information Professional’s Best Practices Award for their innovations in crash data handling. The CTSRC also received the Bright Idea Seal from the Ash Center for Democratic Governance and Innovation, part of Harvard’s Kennedy School of Government, earlier this year.

In addition to this national recognition of their work, CTSRC has also received a $10 million grant from the U.S. DOT to build new tools and software that will allow them to expand the safety analysis and traffic engineering capabilities of the repository. It builds on the crash data collection program by creating a data/safety analysis system to identify and track areas in the state with safety issues. ConnDOT can then use the system to propose countermeasures, estimate their impact on safety, and track them to see if they’re successful.

“We work to prevent crashes before they happen through intelligent and responsive planning. The partnership with the CTSRC has given us the opportunity to expand the functionality of the repository. The tools they created have allowed us to analyze more crash data than ever before and use this data to make informed decisions,” said Tom Maziarz, chief of ConnDOT’s Bureau of Policy and Planning.

The center published 20 years’ worth of crash records, which has made the data on crashes instantly available to law enforcement,ConnDOT engineers, highway safety advocates and the general public. Anyone can search, analyze and download detailed crash statistics at http://www.ctcrash.uconn.edu/.

The Connecticut team consisting of ConnDOT staff, software consultants and Jackson’s team at UConn started by taking a 20-year-old crash report and developing a modernized State crash reporting system. The goal was to align Connecticut’s system with national crash data guidelines, known as Model Minimum Uniform Crash Criteria Guideline (MMUCC), and to leverage efficiencies gained with electronic reporting. The UConn team was responsible for developing a digital repository to store the state’s crash data and training law enforcement personnel on digital reporting, as well as assisting the ConnDOT with the elimination of the two year backlog of crash reports.

“We went out and trained every single police department in the state,” said Jackson. Three retired police officers were hired to help with transitioning the departments to the new software, which the CTSRC also provided grants for.

Between faster, more efficient reporting and hiring 35 of UConn students to help with data entry, the CTSRC was able to assist the ConnDOT in reducing the backlog of crash reports from 16 months down to 60 days. The goal is to reduce turnaround down to 10 days, which Jackson says they are on track to meet.

“Up until Jan 1 of this year, 70 percent of the data was received on paper. We’re at the point now where every police department is submitting electronically. We’ve achieved the 100 percent submission rate that we wanted,” said Jackson.

“There’s only 3 or 4 states where 100 percent of their crashes are submitted electronically, and almost no other state with 20 years of accessible data,” he said. Connecticut is an innovator in this field and it’s attracting national attention. “One of the unintended positive effects of the data repository is that more people are doing transportation research on Connecticut because our data is so extensive and complete.”

In Connecticut, the primary users of the data repository will be ConnDOT engineers and law enforcement officials, although the data will also be useful to local planning organizations, researchers, highway safety advocates and the general public.

“The majority of the analysis is going to take place here at UConn and at the DOT. We’re showing users how to do the crash analysis,” said Jackson.

Jackson says the next step will be to expand the crash data repository to include information on tickets, DUI’s and other traffic citations. This will allow police and government officials to see the effects of different policies on driver behavior.

“With this data, we’ll be able to see how our efforts are helping to change behaviors that cause crashes,” he said.

Jackson says the CTSRC has been instrumental in taking Connecticut from outdated paper reporting to one of the nation’s best crash reporting systems in just two years because “the DOT engaged UConn and this was our dedicated job. We were able to focus on this project and we had the support we needed to complete it.”

ConnDOT Commissioner James Redeker has been very supportive of the initiative. “Working in collaboration with UConn has allowed us to completely transform the infrastructure for collecting and analyzing crash data. Connecticut is one of the few states with all-digital reporting and we’re leading the country with one of the most advanced crash reporting systems. We’re excited to learn more about what we can do with this data and continue to expand our capabilities.”