Building the Next Generation of Efficient Computers

UConn researcher Bryan Huey has uncovered new information about the kinetic properties of multiferroic materials that could be a key breakthrough for scientists looking to create a new generation of low-energy, highly efficient, instant-on computers.

One of the drawbacks of computers today is that accessing memory creates heat and wastes energy.

Materials known as multiferroics have shown great promise for creating a low-energy memory storage and processing device because they have the rare ability to be both magnetic and ferroelectric, meaning they can be sensitive to magnetic and electric fields simultaneously.

But there is one major drawback. Most such materials only function in extremely cold temperatures, due to their inherent thermodynamic barriers and other conflicting properties. Scientists were convinced that using multiferroics at room temperature – which is essential if they are to work in computers – was impractical.

The fastest atomic force microscope in the U.S. 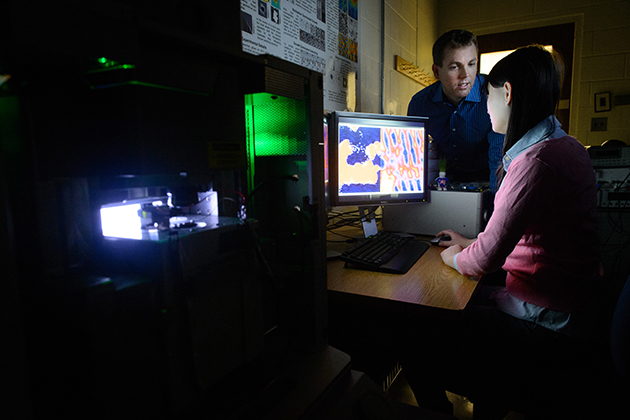 That belief changed recently when Huey, working in collaboration with multiferroics experts at the University of California, Berkeley and Cornell University, aimed his lab’s powerful atomic force microscopy(AFM)  system at a multiferroic compound known as bismuth ferrite and discovered a previously unknown two-step ferroelectric switching process.

The insight gave his fellow scientists the leverage they were looking for to overcome the prior barriers, and develop a unique spintronic memory device that switches its magnetization with the application of an electric field rather than an electrical current, which is more energy-consuming. This enabled – for the first time – a novel low-energy, highly efficient nonvolatile memory device known as a spin valve that operates at room temperature. The device could be a harbinger of the future when it comes to faster, cheaper, and cooler temperature ways for storing and processing data.

The findings were featured in the Dec. 17, 2014 issue of Nature, considered one of the world’s most prestigious scientific research journals.

“Recognizing magnetic domains is how information is stored and read,” says Huey, an associate professor of materials science and engineering. “By coupling the magnetic and electric fields, we’ve shown that you can make a more efficient electromagnetic device that will sense a magnetic field change 10 times more efficiently than comparable technologies.”

The research project was led by Ramamoorthy Ramesh, an expert in multiferroics affiliated with the U.S. Department of Energy’s Lawrence Berkeley National Laboratory and a longtime collaborator of Huey’s. John Heron, Darrell Schlom, and Dan Ralph of Cornell University also worked on the project. Heron served as the paper’s lead author, and spent several weeks in Huey’s lab during the effort.

“The advantage here is low energy consumption,” Heron told the Cornell Chronicle. “[The device] requires low voltage, without current, to switch it. Devices that use currents consume more energy and dissipate a significant amount of that energy in the form of heat. That is what’s heating up your computer and draining your batteries.”

The new device has some limitations in its current stage. It operates on only one computer bit and is prone to failure after only a couple of switches. By comparison, commercially popular flash memory systems can switch 10,000 times or more before showing signs of fatigue. But Huey and his colleagues are optimistic that those barriers can be overcome with further study.

One of the most important findings in the research was made by two of Huey’s graduate students, James Bosse and Linghan Ye, who provided critical data to the team by capturing the steps of the switching process in three dimensions using atomic force microscopy, something that had never been done so precisely before.

“By measuring in all three dimensions, we now know the switching steps for every single position, and at the nanoscale,” says Huey.

The atomic force microscopy systems in Huey’s lab are some of the most powerful in the country. They are based on a commercial platform (Asylum Research), but include several custom modifications and extensive additional hardware for higher speed and automated control of variables such as externally applied electric fields, optical illumination, and temperature gradients. The work often blurs the lines between materials science, electrical engineering, and computer science, as Huey’s research staff rapidly generates gigabytes of data – ironically – while investigating faster and more efficient data storage technologies.

Students working in the lab also use the equipment to manipulate the atomic structure of materials to create unique artwork on the nanoscale. (See Nano Jonathan sidebar.)

“We have the fastest AFM in the U.S. for measuring properties,” says Huey. “We also have one of the most flexible systems in the world for coupling AFM and light.”