Is it a coincidence that the University of Connecticut School of Engineering centennial and Connecticut’s Submarine Century perfectly align? 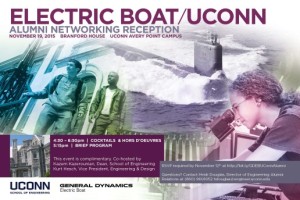 One hundred years ago, the university introduced their first four-year engineering degree program.  Before that time, the Division of Engineering at Connecticut Agricultural College, what is now the School of Engineering at the University of Connecticut, operated a two-year program emphasizing agricultural practice and agricultural science, including agricultural mechanics.  The program’s first bachelor degrees, conferred in 1920, were in mechanical engineering.  The same year the four-year program started, on the eastern shore of the Thames River in Groton, Connecticut, the first three submarines, G-1, G-2 and G-3, arrived at the former Navy Yard, newly designated a Submarine Base.  A few miles downriver from the Sub Base, the Electric Boat Company was designing and building the first modern submarines to be purchased and commissioned into the United States Navy.  That company, now General Dynamics Electric Boat (EB), a subsidiary of General Dynamics Corporation, has been the primary builder of submarines for the United States Navy for more than 100 years.

One hundred years ago, an enduring, mutually beneficial relationship between UConn and EB began, the university providing well-educated, talented graduates to fill rewarding and challenging positions in the EB workforce.  According to EB President Jeff Geiger, nearly 5% of the company’s roughly 14,000 employees are UConn alumni – 700 engineers, scientists, mathematicians and business professionals.  This past year, EB hired about 130 new UConn graduates and more than 70 of last summer’s interns were UConn students.

This event is complimentary and RSVP is required by November 12th at http://bit.ly/GDEBUConnAlumni.