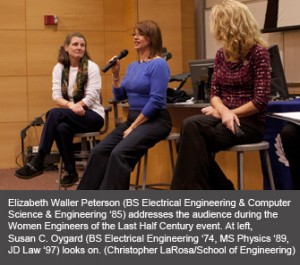 On Friday, November 30th, UConn celebrated the 40th anniversary of the Women’s Center.  In concert with the day’s events – which included a lecture by legendary feminist, journalist, and social/political activist Gloria Steinem – the School of Engineering hosted a panel of four female engineering alumnae representing four decades of experience. Since awarding the first degrees to Tina (Lizzi) Lewis and Marie (Leary) Mulligan in 1955, UConn Engineering has produced more than 1,800 women engineering graduates. View a photo gallery of the event here.

As a slide show toasted the history of women engineers at UConn and the 1975 Helen Reddy feminist anthem “I am Woman” reverberated across the auditorium, women undergraduate and graduate students, alumnae, faculty and administrators, as well as a handful of men arrived for the event.

Interim Dean of Engineering Kazem Kazerounian welcomed the audience and panelists and then remarked that during the ‘80s and ‘90s, the School leadership thought it was forward-thinking by creating a welcoming and affirming environment that treated all underrepresented populations, including women, equally.  Now, though, he said, “We recognize that we are nowhere close to where we should be in terms of recruiting women faculty and students. We need to take a much more ambitious and proactive approach to attract and retain greater numbers of women, who play a critical role in advancing the engineering profession.

A common theme among the panelists was their non-traditional paths.

Ms. Oygard, who noted that it was a “good time to be a woman engineer” in the 1970s when she began her career as a Project Engineer at United Technologies Corporation, was encouraged to become an engineer by her grandfather, a UCLA engineering graduate. Like many women, she took time off from her career to raise her children, and as they matured, she returned to school for her master’s degree.  Her background in electrical engineering and physics attracted the interest of the CIA, and she began working as an intelligence job with the organization. Later still, she earned her law degree and practiced intellectual property law in Connecticut. Ms. Oygard noted that her engineering education and experience were of enormous value to her in evaluating the substance of IP applications.

Ms. Isherwood took a particularly circuitous route. After her freshman year in college, she concluded it was not for her and left school to begin a first career with Aetna. She married, started a family and bought a house during those years. Eventually, she decided to return to school, first attending Manchester Community College and then UConn. Next came a stint with a small engineering firm, where she quickly learned how to perform the full gamut of tasks, from bond estimates, to plot plans and site grades. She earned her professional engineering license along the way and in 2010 Ms. Isherwood founded her own civil engineering design firm.

The youngest alumna on the panel, Ms. Jacques – who received numerous scholarships and awards, interned twice with Hamilton Sundstrand, and earned plaudits throughout her undergraduate years – graduated into a bad economy characterized by widespread hiring freezes across the swath of industries. The poor economic climate initially hampered her career plans, forcing her to accept employment in the retail trade before she turned a career corner that led to QuEST Global Engineering, a Hamilton Sundstrand service provider. Today, she is happily employed as a project engineer working on the F135 Joint Strike Fighter for Pratt & Whitney.

Taking yet another uncommon engineering route, by today’s measure, was Ms. Peterson, who works in the nuclear power industry. After entering UConn initially as a math major, she found engineering a more satisfying academic path and, after earning her degree, joined Electric Boat in 1985. During a career hiatus to raise her children, she took courses offered by the Department of Labor to update her skills and then decided to immerse herself in the nuclear industry as an engineer at the Millstone Power Station operated by Dominion Nuclear. She has continued to invest in her education, earning an MBA, Toastmaster certification and Six Sigma Black Belt certification.  Ms. Peterson’s enthusiasm for learning still fully intact, she said she is considering returning to school for a Ph.D. or pursuing a Senior Regulator license at Dominion.

Before a rapt audience, the women also addressed questions concerning workplace sexism and sexual harassment, the work-life balance and what advice they would give young women currently working on their engineering degrees.

The panelists agreed that over time, the workplace has become much more accepting of women engineers, and while sexism and harassment may have been common during the 80’s, today’s work environment is generally free of such negative behaviors. The notion of “work-life balance” was discussed, and Ms. Peterson remarked, “It’s work-life interaction, not balance.” After spending 10 years at home raising her children and working as a math teacher, she said she and her engineer husband decided he would pursue his dreams of becoming a craftsman and work from home, which freed her to become more fully engaged in her career. The women agreed that competent daycare, a supportive spouse who is willing to share in household duties, and an accommodating workplace are essential for practicing women engineers, whose work demands typically exceed the traditional 40-hour work week.

Thinking about her own engineering career, Ms. Oygard drew an analogy with “children playing on the beach,” working cooperatively to build a sand castle. “As an engineer, you’re part of a team of people, all contributing toward the same goal.”  The women agreed that rising engineering women should be willing to take risks, take courses in business and communications, and “pay it forward” by mentoring the next generation of women engineers.