Cheerleader Takes Time Out from Lab for Super Bowl

As a senior majoring in biomedical engineering, Alyssa Merkle ’15 (ENG) has a pretty hectic schedule, which includes finding time to build an incubator for testing cancer cells.

Now add to that her duties as a New England Patriots cheerleader; she joined the 28-member squad in May. That means attending two three-hour practices during the week, a six-hour rehearsal on Saturdays, attending promotional events, and of course, cheering at the games on Sundays.

“Last semester, it was definitely an adjustment, and it meant some time management, and staying up a little later some nights or getting up a little earlier to study,” she says, adding that “a little earlier” sometimes meant 4 a.m. “But everything has been so worth it that I really didn’t mind whatsoever. Once I got on a good schedule, it was totally fine.”

She achieved a 3.8 GPA last semester, so she’s obviously doing something right. 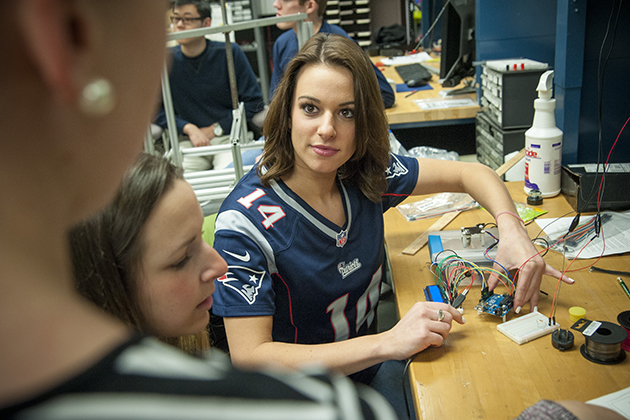 With the Patriots heading to Super Bowl XLIX, she and the rest of the cheerleading squad fly out this week to Arizona, where the game is being played.

Although she has taken dance lessons most of her life and has been a member and captain of the Dance Team at UConn, it was not until her junior year that a friend suggested she try out for the Patriots’ cheering squad. She comes from a baseball family, and had never really followed football.

She’s made a lot of friends and great contacts as a Patriots cheerleader, but what she really likes about the job are the community outreach events, like visiting children’s hospitals and attending fundraisers for charitable causes.

One particular promotional appearance involved handing out jackets that turn into sleeping bags to homeless people in Boston. “That was a really moving event for me,” she says.

In high school, Merkle was very interested in math and science. Her uncle, an electrical engineer, knew of her interest in helping people and steered her toward biomedical engineering.

“I started reading up on it, and it really included everything I love – math, science, and helping people,” she says.

“You’re in the biomedical department of a hospital, but you’re really working with the patients, as a liaison between the patients’ safety and the manufacturers of the medical devices,” she says. “So for me, it’s really about helping people.”

Women are a minority in engineering; professional cheerleaders are even scarcer. So Merkle is breaking more than one stereotype.

“I love that,” she says. “I love that when I go to cheering events, I’m able to say that I’m going to school for biomedical engineering just to see the look of shock on their face. Because it does break the stereotype, and I’m happy to be able to do that.”

She says the Patriots are focused on finding cheerleaders who can serve as role models off the field.

“Many of the girls on the team break the stereotype,” she says. “We have one girl who’s going for her Ph.D. in neuroscience. We have a dentist on the team. We have a physical therapist.”

Her family has season tickets to the Patriots’ games. They also took their chances more than a month ago, and bought tickets for the Super Bowl.

Besides the game itself Sunday, the trip to Arizona will include a Good Morning America appearance that requires a 2:30 a.m. wake-up time. And they probably won’t get to sleep until midnight the night before, Merkle says, “so it’s going to be a whirlwind, but I cannot wait. I’m way more excited about it than I am nervous.”

And when she gets back, it’s immediately back to her studies, specifically working with her team on getting the incubator for testing cancer cells ready for the School of Engineering Senior Design Demonstration Day at the end of the semester.

“It’s going pretty good,” she says. “We have our design down and we’ve tested our carbon dioxide machine and sensor. Now we’re ready to make the first actual incubator.”