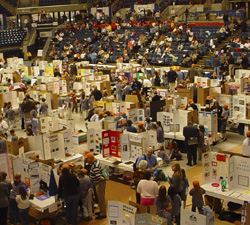 The Connecticut Invention Convention (CIC) celebrated its 25th anniversary on Saturday, May 3rd, when 550 students in grades K-8 came to UConn’s Gampel Pavilion to showcase their inventions. They were joined by more than 200 judges; exhibitors and volunteers; and thousands of teachers, family members and sponsors. This year marked the 10th consecutive year the School of Engineering hosted the event, and in honor of the gala atmosphere Engineering Dean Mun Y. Choi welcomed the visitors and delivered opening remarks.

Dr. Choi recognized all of the stakeholders who make CIC a success and congratulated the students who “are already winners, whether you become engineers, lawyers, doctors or historians.”

He told the audience that the year he graduated from high school, Michael Jordan was drafted into the NBA, and Steve Jobs and Steve Wosniak introduced the Apple Lisa, the first commercial computer with a graphical user interface. “I tend to think Steve Jobs and Stephen Wozniak should be considered greater heroes than a sports star,” he remarked. He described the pace at which technology advancements are doubling, saying that by 2013, technology may be doubling every few days. Dr. Choi touched upon IBM’s efforts to develop the “Blue Brain” computer and the challenges inventors will face in the decades ahead. He urged the students to use their talents to solve the world’s problems, telling them 1.2 billion people across the globe lack clean drinking water, and an equal number lack electricity.

Dr. Choi introduced UConn engineering student Danen Saviano, who competed in several CIC competitions as a youngster and – along with his parents – who served as CIC Judges this year and many times in years prior.

With a theme of “Imagination in Play,” CIC is the oldest continuously running children’s invention competition in the nation and an exhibition of pragmatic problem solving among K-8 school children who demonstrate impressive ingenuity. CIC competitors have appeared as guests on the Tonight Show with Jay Leno, the Ellen DeGeneres Show, American Inventor, WFSB’s “Everyday Heroes” and the Martha Stewart Show, as well as educational programming on PBS’s Cyberchase and ZOOM.

Each fall, K-8 teachers in over 90 participating schools across Connecticut ask their students to identify a problem they or someone close to them experiences regularly. The children formulate possible solutions, test them to learn what works, and select and refine one into a working prototype. Nearly 10,000 Connecticut students are involved in the program. Schools hold their own competitions, and the winners are selected to proceed to the state-wide convention in Storrs, where they vie for top state laurels before teams of judges from industry, education and government.

Kevin A. Bouley, CEO and president of Nerac, Inc., of Tolland, CT, participated as a CIC judge for the first time. Bouley, a UConn School of Business alumnus and entrepreneur who is nurturing a technology corridor between Tolland and Storrs, said he decided to volunteer as a judge because he thought it sounded like fun. “As a judge, you get to interact with kids in grades K-8 who have put a lot of thought, creativity, inspiration and work into developing an invention.”

Each judging team, typically comprising two to three individuals, is responsible for judging seven to ten inventions in each “Judging Circle”. Bouley explained that the teams meet with each young inventor to learn how the child developed his or her invention. Judges also review the inventor’s log and the invention itself. “We are tasked to rank the three inventions we feel most closely embody the criteria. Students must be able to clearly articulate the nature of the problem, how their invention works and differs from other possible solutions, and what they learned from earlier prototypes before settling on their final design.”

Bouley’s team reviewed seven projects developed by sixth graders. “What’s interesting to me is the types of challenges the kids experience,” he said. “For example, one student in our circle, Adam Murphy [Thomas Edison Magnet Middle School in Meriden], goes to a school where the lockers automatically lock each time they’re closed. In a crowded hallway between classes, it would be easy for a locker door to close before the student was done, or for a student to forget something and have to click through the combination again. This can create stress about being late to class. So Adam fashioned an L-shaped block of wood, covered it in foamy fabric and attached a set of magnetic strips. Now, when a kid unlocks his locker, he can take the “Locka Stopper” from inside, place it just over the locker lip and easily transfer things in or out without the fear of the door closing unexpectedly. The magnets keep it in place, and the foam protects the locker from scratches, so the school is happy.”

“I asked Adam whether he had thought about marketing the “Locka Stopper” to his classmates, and he told me he had received orders already. Everyone wants one. That’s the part that makes it fun. As a judge, you gain insight into the lives of these kids and what challenges they face. I would never have realized this was a problem.”

Bouley praised CIC president Charlie Baumgartner for his tireless commitment and leadership in making the event successful. He also lauded the countless Connecticut teachers who have enthusiastically embraced the CIC curriculum and who nurture their students through the invention process year after year. “They are heroes,” he said.

“Applying their intellect and creativity to a challenge, children demonstrate they can transform concepts into real problem solutions,” said Charlie Baumgartner, CIC president and NPI purchasing program manager, GE Consumer & Industrial. “It is the most gratifying experience imaginable, for the children themselves, of course, but also for the adults involved in making this happen: the teachers, parents, judges and our sponsors.”

The CIC Board – a dedicated all-volunteer team of educators, industry professionals and policy makers – relies each year upon a complex network of sponsors, donors, committed teachers and judges to keep the invention convention vibrant. The UConn School of Engineering hosts and co-sponsors the event, and Marty Wood, assistant dean for undergraduate education, serves as CIC vice president. Associate professor of Civil & Environmental Engineering Ramesh Malla also serves on the Board.

For more information about the Connecticut Invention Convention, visit www.CTInventionConvention.org.