Cities May be Trading Parking for People

When it comes to concentrated parking, the economic vitality and “livability” of urban centers may be compromised by too much of what many commuters consider a good thing.  Civil & Environmental Engineering (CEE) doctoral student Christopher McCahill has studied the impact of off-street parking in several Connecticut cities, including Hartford and New Haven, and he believes that as the number of available parking spots rises, the vibrancy of cities may suffer.

The reasons are complex, blending psychological, spatial and logistical components. One obvious reason is that parking lots – particularly single-level expanses of asphalt or concrete – consume space that could otherwise house businesses, cultural facilities, retail stores, restaurants and other magnets that draw people into a city.

In research highlighted on the Atlantic Cities website, in an editorial published in the New Haven Register October 30th, and in an interview aired on NBC Connecticut on November 22, McCahill described research he has conducted with Dr. Norman Garrick, an associate professor of CEE.  One focus of this research is on understanding the relationship between a society’s dependence on automobiles (versus mass transit, bicycling and walking) and the number of people and activities within a given urban environment.

McCahill’s research suggests that cities regarded as “automobile dependent” tend to have not only significant automotive infrastructures such as major highways, but also double the amount of parking per resident or worker versus the amount found in non-auto dependent cities.  Hartford and New Haven are among the cities that are considered auto dependent, in contrast with places such as Berkeley, CA and Cambridge, MA.

“We set out to understand the variability among different cities’ transportation profiles, and how these variations influence land use, economic vitality and livability issues,” said McCahill.  “Cambridge and Berkeley are characterized as having high rates of car ownership, yet residents choose alternative forms of transportation around these cities, in contrast with Hartford and New Haven.”

One indicator of a city’s automobile dependency is parking lots.  To understand and quantify the growth of parking lots on these cities, McCahill and Garrick obtained aerial photos from different time periods and counted the number of parking spots found in city parking lots – excluding on-street and underground parking.  For New Haven, McCahill compared aerial shots taken in 1951 and 1985 and concluded, based on his counts, that the volume of off-street parking more than tripled. Between the early ‘50s and today, the volume of off-street parking increased by nearly 400 percent. 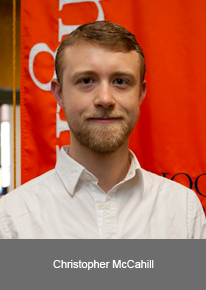 During the same time period, both cities suffered declining populations of 21 percent and 30 percent, respectively, for New Haven and Hartford, as residents left the urban centers for the suburbs. As city leaders sought to respark growth, they added parking lots. Today, there are double the number of parking spaces per driver than existed during the 50s.

McCahill explained that the leaders of many cities surrounded by suburbs believe that to reclaim their attractiveness as destination locales after work hours, every successful city business must have sufficient dedicated parking so that parking is no longer an issue for customers considering whether to go to the city or suburban attractions.

He notes that Cambridge, MA has grown in population but hosts fewer parking spots today than it did in 1985, thanks to ceilings on the number of parking spaces put in place decades ago, and to aggressive planning for alternative transportation. Cambridge is a vibrant community, with a large mix of restaurants, retail and other businesses, and a large proportion of residents and visitors walk, ride bicycles or travel using public transport.

While many developers and city planners view convenient parking as a crucial ingredient for economic growth, the research shows that this is not necessarily the case.  Limited parking in places like Cambridge has not inhibited remarkable growth.  Thus, the relationship between parking and growth does not necessarily conform to expectations.  Parking is just one way of providing access to economic opportunities, but relying on it heavily can be very costly.