In early May, the School of Engineering honored the achievements of over 435 undergraduate students and nearly 185 graduate students who were awarded their B.S., M.S. and Ph.D. degrees after years of long nights, countless problem sets, design challenges and joyful “aha” moments when difficult formulas suddenly gain meaning.

A total of 124 graduating master’s and almost 60 doctoral degree students were feted on Saturday, May 7th, along with fellow graduate students from across campus, within the home of the championship Husky men’s and women’s basketball teams, Gampel Pavilion in Storrs. 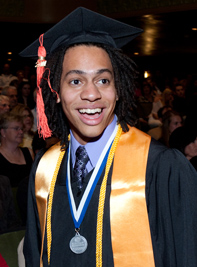 The next day, on May 8th, the expectant new B.S. graduates and their families filled the Jorgensen Center for the Performing Arts for their proud passage from students to alumni. In his remarks, Dean of Engineering Mun Choi noted that “Commencement represents a new beginning, but it’s also a time for reflection.”  He urged the new graduates to think of education not as an end but rather a beginning. “The education you take away from the University of Connecticut will be your lifelong partner as you learn from the past and also prepare for the future.”

Dr. Choi said that while the last century was filled with marvelous accomplishments, from the invention of automobiles and airplanes to computers and the Internet, these technologies were not always implemented with consideration given to their broader impacts such as security, sustainability or impact on society.

To succeed in the new, more global paradigm, he said, “Engineers like you will have to embrace a more universal and more humanistic perspective; to develop solutions that do not place limits or boundaries on social or economic class. When you walk away today with a UConn education, think about the difference you can make not only in Connecticut but to global society.”

During the ceremony, UConn’s Senior Vice Provost and Vice President for Research, Dr. Suman Singha, bestowed an honorary Doctor of Science upon Dr. Charles Vest, President of the National Academy of Engineering and President Emeritus of the Massachusetts Institute of Technology (MIT).  Dr. Vest is among the most influential and prominent engineers in the nation. He served on the President’s Committee of Advisors on Science and Technology (PCAST) during the Clinton and Bush administrations, was vice chair of the Council on Competitiveness for eight years, and was awarded the 2006 National Medal of Technology by President Bush.

Addressing the audience, Dr. Vest quickly captured the spotlight with a startling public admission of a love affair, saying “For the last 40 years, I have had a love affair with American higher education. My passion for American public and private universities and the opportunities they create is undiminished.”

“This century truly is the knowledge age. To thrive in this century,” he said, “We cannot depend on our geography, natural resources or military might. We can thrive only on brain power, organization and innovation.”  Doing so, he said, requires loosely structured partnerships among government, industry and academia – with academic institutions constituting the most essential element.

Dr. Vest remarked “In this age, it’s incumbent on the United States to enhance its capacity for engineering and scientific innovation, and to build a broad technological literacy and skill in its workplace in order to have the possibility to prosper, be healthy and secure, and to contribute to solutions to great challenges facing our planet and its inhabitants.”

He called upon citizens to “Recover our optimism – our ‘can do’ spirit – in order to remain a great nation and to meet the challenges of our times. The way to accomplish this is to reconnect what we do with what we dream.  In the end, I believe knowledge and skill trump ignorance, and optimism trumps pessimism. If you believe this, and you embrace the opportunity to serve, you will find personal happiness and fulfillment beyond expectation. And you will benefit our world immeasurably.”

Concluding his remarks, he charged the 2011 graduating class to ponder the unthinkable, question the status quo, be citizens of the world as well as the U.S., dream of a better future and “take your talent, education and energy and build our nation and community.”

Graduating senior Khayriyyah Munir (Biomedical Engineering), who was chosen for the honor of representing her class, followed Dr. Vest in addressing the audience. “No matter what type of engineering, the purpose of our work is to make getting from point A to point B easier, no matter what those points may actually be,” she noted, pointing out that most engineering students found the path anything but straight.

Reflecting on the academic challenges experienced by engineering students, she said, “Part of me thinks the term ‘engineering degree’ is synonymous with ‘difficult struggle,’ and every one of us made a conscious decision to accept this. No matter what the reasoning was – if it was the hope for a higher paying job in industry (when the market actually takes a turn for the better), or a better step-off into professional school, or the fact that we just knew we could do it – we are now where we hoped to be.”

“What we must always remember is that we are now professional problem solvers. We have it inherent in us to make things better, and we’re expected to do just that. By no means is this an easy task, but it’s something each of us is capable of doing,” she concluded.

To riotous applause and peals of joy from proud families and friends, each graduating student in turn strode across the stage to greet administrators and receive a UConn engineering certificate attesting to dedication and accomplishment.