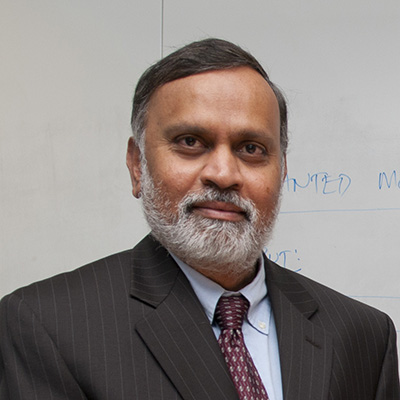 Established in 1998, the award recognizes faculty members who have demonstrated excellence in teaching, research, and service.

Rajasekaran joined the computer science and engineering department in 2002 and currently serves as the United Technologies Corporation Professor of Computer Science and Engineering.

His numerous research contributions have advanced knowledge in the areas of applied algorithms, big data, bioinformatics. Rajasekaran was instrumental in the development of a website tool, the Minimotif Miner (MnM), which allows researchers to search a given protein for hundreds of amino acid motifs that may be associated with diseases such as Creutzfeldt-Jakob disease. The tool is used by biologists worldwide.

Author of more than 300 research articles, Rajasekaran’s studies have garnered more than $18 million in funding, most from the National Science Foundation (NSF) and the National Institutes of Health (NIH). Two textbooks that he wrote have been translated into several languages.

Within UConn, he has served on many key departmental, school, and university committees. Since 2005, he has served as the director of the Booth Engineering Center for Advanced Technology.

He is also a fellow of the Institute of Electrical and Electronics Engineers (IEEE), and the American Association for Advancement in Science (AAAS), and an elected member of the Connecticut Academy of Science and Engineering (CASE).