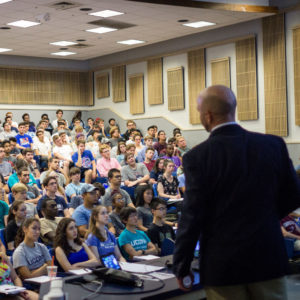 UConn students who pursue careers through the University’s new undersea engineering program will play a vital role in our national defense and have opportunities to work on some of the most sophisticated submarines in the world, three members of Connecticut’s congressional delegation said during a rare group visit to Storrs Friday.

“Naval research, naval engineering, naval science has never been more important,” Blumenthal told the students. “The research you are doing now and in the future will be the lifeblood of our national defense.”

Courtney, whose district includes the General Dynamics Electric Boat shipyard in the southeastern corner of the state, described the workplace as having a “Google-like” atmosphere, with waves of young engineers entering the industry and using the latest skills and technologies to build a new generation of submarines for the U.S. Navy. Electric Boat expects to hire 14,000 employees over the next decade to keep pace with government demand for new Virginia and Columbia classes of submarines.