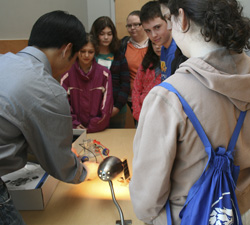 On April 14th, nearly 90 middle school students interrupted their spring vacations to visit the UConn campus and explore a variety of alternative energy sources. The young people are participants in a novel program entitled Connecticut Kids Fueling the Future. The School of Engineering hosted the visit, which was organized by Tricia Bergman of the Center for Clean Energy Engineering(C2E2).

The Kids Fueling the Future program is intended to expose students to diverse renewable energy sources – wind, solar, biodiesel and other technologies, according to Pasquale “Pat” Thomas, who accompanied the group on its trip to Storrs, where the students were treated to a short primer on current and future energy needs and sources presented by assistant professor Ben Wilhite, followed by short introductions and demonstrations of fuel cell, biofuel and solar energy technologies.

Dr. Wilhite provided an overview of global energy needs – which are expected to double in 35 years – and current sources. Oil supplies roughly 40% of the world’s energy, about half arising from the Middle East; natural gas satisfies about 25% of global energy needs, of which about 60% arises in Qatar, Iran and Russia; and coal fills about 25% of the world’s needs, with half of the world’s proven reserves held by the U.S. and China. Nuclear and hydro-power supply the remainder. He explained that oil, coal and natural gas are non-renewable sources that are burned to supply energy, releasing CO2, NOx, sulfur and harmful particulates into the atmosphere. To replace these with renewable energy will require a “diversified portfolio” of solar, thermal, nuclear, hydro, wind and other sources reduced to a “common currency” of hydrogen, which may be used to power fuel cells. 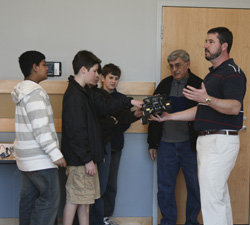 Following Dr. Wilhite’s opening remarks, the students dispersed to various energy stations. At the fuel cell station, the C2E2’s own design technician, Pete Menard, introduced the students to fuel cell fundamentals and engaged them in a discussion of endothermic versus exothermic reactions before conducting demonstrations. The demos included a fuel cell powered mini race car and tape player as well as a hydrogen powered model rocket.

A second station focused on biodiesel production at the Connecticut Biofuel Consortium lab. Dr. Richard Parnas and members of the consortium explained and demonstrated how UConn’s biodiesel reactor transforms waste cooking oil, collected from the University’s dining facilities, into clean fuel to power a campus bus. The third energy station involved solar technologies and was hosted by Dr. Marty Fox, who explained the principles and economic benefits of solar energy and demonstrated photovoltaic cells and photothermal units. In a windowless demonstration room, Dr. Fox substituted conventional light bulbs for sunlight to illuminate a photovoltaic array that converted the excited photons into electricity to power a fan, MP3 player and LED light. Dr. Fox also discussed and demonstrated a solar thermal device that can replace conventional water heaters in homes and businesses.

The program is the brainchild of Mr. Thomas and Steve Pelosi, two “retired” science teachers from the West Haven schools, who have developed a science enrichment program with state funding. The Connecticut Kids Fueling the Future program is one of a handful the two have championed. The others include programs in aquaculture, “Cosmic Cultures,” ecosystem exchanges and eco Saturdays. Students in six school districts – Stratford, Wallingford, Milford, West Haven, New Haven and Meriden – participate in the program, which was established to provide children in grades 4-8 with opportunities to explore science in a non-traditional manner. Other field trips the group plans include visits to a wind farm in Pennsylvania and a biodiesel plant in Bethlehem, CT.