Dr. Richard Parnas, director of the University’s Biofuel Consortium, hosted a film crew from Connecticut Public Television (CPTV) in April.  The CPTV crew interviewed Dr. Parnas and filmed the production of biodiesel from waste vegetable oil as part of a segment on green technologies to be aired during the summer.  It’s just one of many recent “tech props” Dr. Parnas has received for his innovative biofuels research. 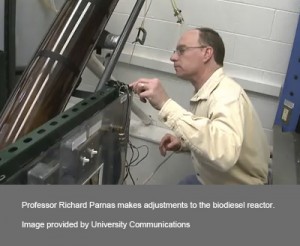 Dr. Parnas and his team garnered significant press coverage in 2010 for a limited study showing that industrial grade hemp-based biodiesel has superior cold flow properties versus those of many biodiesel mixtures. Cold temperature is the major issue requiring caution when using biodiesel.  Dr. Parnas, a professor in the Chemical, Materials & Biomolecular Engineering Department (CMBE) and the Institute of Materials Science (IMS) at UConn, has championed biofuels as a green energy source for years.  Biofuels are extremely attractive as an alternative transportation fuel because they produce very little in the way of ozone-depleting emissions, in contrast with fossil fuels.

Within the warren of interconnected spaces that make up his basement laboratory in the Engineering II building on the main Storrs campus, Dr. Parnas has spent four years improving upon a basic biodiesel reactor design with the objectives of increasing production capacity and enhancing efficiency.  The lab features two reactors: the oldest, smaller of the two units is used in the ongoing waste cooking oil-to-biodiesel production operation; the second, which features unique design enhancements developed by Dr. Parnas, is used for research and testing.  A YouTube video of the reactor may be viewed here.

Since 2005, Dr. Parnas estimates 25 undergraduate students have worked in the laboratory, processing waste cooking oil collected from UConn’s dining facilities and from Pratt & Whitney’s food service into clean biodiesel that is used to help fuel UConn’s bus fleet.  The students do more than merely combine oil and chemicals, however; working with Dr. Parnas and his graduate students, they have also contributed to a numerical model that accurately mirrors the entire process on a computer screen, using data collected in real time. The model enables the team to monitor each step of the process and to make adjustments as needed for optimal performance.

Dr. Parnas and two partners, Fred Robson and Rich Madrak, recently formed a startup company called RPM Sustainable Technologies.  It will commercially market a novel, patented reactor system designed by Dr. Parnas, which features a number of unique process improvements over the traditional reactor design and reduces production costs. The partners have commissioned an industrial equipment manufacturer to build the systems, which will be scaled-up versions capable of serving communities and processing between 250,000 and 5 million gallons of biodiesel yearly. The first unit will be delivered this summer to UConn.

In most traditional reactors, the process is conducted in a batch mode.  The biodiesel is separated in one stream while waste products left over from processing – glycerol, methanol and potassium hydroxide – are removed in a second stream that must be further separated and processed for re-use.  In Dr. Parnas’ patented design, biodiesel is processed continuously and the glycerol settles out naturally during processing.  Continuous processing is more efficient, requires less energy than conventional reactors, and lowers production and material costs.  Furthermore, Dr. Parnas’ reactor design efficiently captures the byproducts so they may be further processed for secondary markets.  He notes that the glycerin will be sold to the personal care products market or converted to high value specialty chemicals, and the potassium hydroxide may be blended with phosphoric acid to produce fertilizer.

While biodiesel holds promise for replacing fossil fuels in applications such as transportation and home heating, the mixtures suffer from several drawbacks.  For one thing, biodiesels generally perform poorly in cold weather, becoming thick and clogging fuel systems.  For this reason, biodiesel is currently blended with conventional diesel fuel – commonly at 20 percent biodiesel to 80 percent conventional (so-called B20) for automotive use.  Because biodiesel requires feedstocks that are fundamentally plant matter, abundance and growing conditions are a factor. Furthermore, to be approved for vehicular use, biodiesel must meet ASTM International’s rigorous industry standards. Samples of the UConn biodiesel are subjected to a battery of 16-18 validation tests conducted in a CESE laboratory building.

Research into alternative feedstocks is an important aspect of the team’s work.  With his faculty colleagues and graduate students, in addition to exploring industrial hemp, Dr. Parnas is studying cotton seed oils and Jatropha oil, among other possibilities.  Jatropha, he explains, is a waste cover crop native to India that produces the second highest oil yield, at approximately 34 percent oil, of any land plant and grows readily in even unfavorable conditions. Already, the handsome succulent is being commercially processed into biodiesel in India, Myanmar and Brazil.  According to Dr. Parnas, palm seeds offer the highest oil yield, but palms grow in a very narrow geographic band around the equator, so large-scale production is currently infeasible.

Dr. Parnas is also collaborating with Dr. Ranjan Srivastava, a colleague in CMBE, on the development of biobutanol as an alternative to gasoline. The project is in its earliest stages and entails more fundamental research.  Whatever the outcome, in the years ahead it is clear that biofuels and biodiesel will gain even greater importance as the nation looks for ways to reduce its reliance on diminishing fossil fuel reserves.