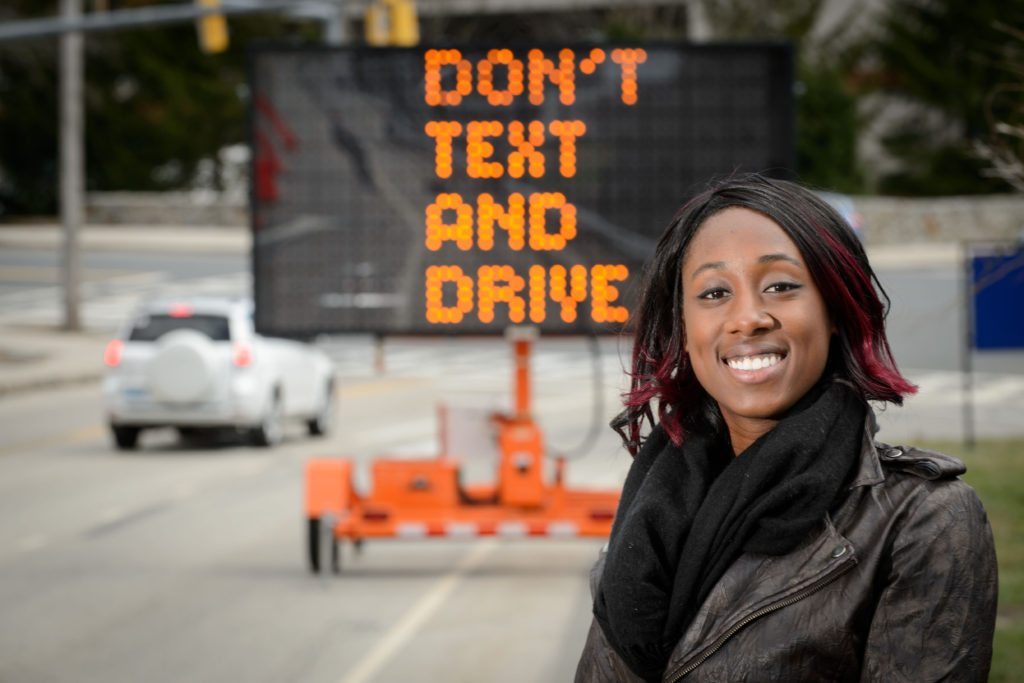 Marisa Auguste gets upset when she sees other drivers texting on their cell phones, reading maps, or putting on makeup while they’re whizzing down the highway.

It’s Auguste’s job after all to keep track of such things. As a new behavioral analyst with UConn’s Connecticut Transportation Safety Research Center, a part of the School of Engineering, Auguste spends countless hours poring over state crash reports, looking for patterns and insights in cases where driver behavior was part of the cause.

“We can make cars safer and we can make roads safer, but nearly 90 percent of motor vehicle crashes can be attributed to some kind of human error,” says Auguste, who joined the CTSRC last May. “So we can’t talk about traffic safety without talking about behavior, especially when you consider all of the texting and driving, talking on the phone while driving, and checking of social media while driving that people are doing today.”

With a master’s degree in criminal justice with a concentration in victimology and a bachelor’s degree in sociology, Auguste says she is fascinated by the different aspects of human behavior. As a social scientist, she has an insatiable curiosity to know why people behave as they do.

“Human behavior is just so interesting. It’s not exact and I love it,” Auguste says. “Everyone’s different and usually people have different motives as to why they do things. I just want to know why. That’s my thing. Initially, I wanted to be an FBI profiler. But now I’m using my education to analyze behavior, driver behavior. Ultimately, I hope to make people feel better and safer and that’s why I love it.”

Part of Auguste’s job is analyze reams of crash data the center has collected under a new accident reporting protocol recently implemented in Connecticut. The crash reports, which now include very specific details about whether the vehicle operator was distracted, have been uploaded to an electronic statewide Crash Data Repository operated by the Center. Access to this kind of detailed aggregate statewide transportation data – which is also available to the public through the repository website – was not previously available.

“Marisa is a great addition to our staff,” says associate research professor Eric Jackson, director of the CTSRC. “Her background in criminal justice and sociology will assist the CTSRC as we start to research driver behavior and try to understand and modify risk-taking behavior while driving.”

Auguste is part of a rapidly growing staff at the CTSRC, which opened in 2013 with support from the Connecticut Department of Transportation and other state agencies. The center recently received a DOT grant for $10 million over the next five years that will support the hiring of 12 new staff to assist state transportation officials with safety analysis. Jackson hopes to bring in a full-time epidemiologist to also assist with research.

Auguste says that besides having crash data, the researchers will also be looking at EMS data, toxicology reports, and medical examiner reports: “Whenever someone is involved in a crash, we want to see what’s going on with their behaviors. Did they have drugs or alcohol in their system? If so, what types of drugs or alcohol? Knowing that helps us home in and figure out what our target populations are and what issues need to be addressed.”

Individuals can follow Auguste’s research progress through her blog, “Drivers Behaving Badly,” which is chock-full of interesting details and tidbits about driving safety. For instance, in a recent blog about seat belt use, she notes that current research shows young male pickup truck drivers in rural areas are most likely not to wear a seat belt. Go figure. But she doesn’t stop there. She proceeds to explain why that group might be less likely to buckle up, such as the belief that larger trucks offer greater protection in a crash, or that low traffic volume on rural roads doesn’t necessitate such precautions.

That kind of detailed analysis is what Auguste hopes to provide as part of her work. She is already a member of Connecticut’s Statewide DUI Task Force, and she expects to provide lawmakers and state officials with comprehensive reports to help guide, strengthen, and change existing laws and policies.

“I want to make a difference,” she says. “I know I am just one little component, but if I can present a clearer picture of what we are doing and what’s going on, that would be phenomenal.”

Distracted Driving Statistics for Connecticut for 2015

Behavior analysis is relatively new to the field of transportation safety research, Auguste says. In the past, when there was a particular stretch of road known for accidents, engineers might look for physical issues – was there a sharp curve, a dangerous intersection, poor sight lines? But a behavior analysis takes a different view. Are we seeing mostly younger drivers involved? Is the area near a late-night bar district where people might be drinking? Were the drivers distracted?

Distracted driving is a conundrum researchers are still trying to figure out. Studies have shown that drivers want a safe driving environment and do know that distracted driving is inherently risky. Yet those same drivers readily admit talking on their cell phones, checking a text, or sending an email while they are behind the wheel.

Ask Auguste why seemingly smart drivers engage in such behavior, and her passion for her work quickly becomes evident.

“Because we think we can!” she says emphatically. “Because in our heads, we’re like, ‘I shouldn’t do this, but I didn’t crash the first 50 times. I’m a good enough driver. I can handle it. I only looked away for a second. What’s the big deal?’

“But it IS a big deal!” she continues. “It’s not until something terrible or tragic happens that we’re like, ‘Wow, I’ll never do that again,’ but by then it’s too late. You may have already killed or seriously hurt someone.”

The same sort of reasoning can be applied to people who speed, cut others off, drink and drive, or don’t wear their seat belts, she says. They have done it before, they refuse to acknowledge the risk, and they may never have been caught.

Through behavioral analysis, Auguste hopes to identify targeted at-risk populations so that appropriate messages can be developed to promote awareness and driving safety to those groups.

It’s not as easy as it sounds.

An anti-texting message featuring scary accident scenarios sent out through social media might work for millennials and teenage drivers, she says. But it’s a different challenge trying to convince, say, older motorcycle riders to wear their helmets when they’ve been riding for 30 years and never had a problem. Sad or scary stories may not work for them. Likewise, the importance of using a child car seat may be lost on individuals whose culture or family traditions may prefer cradling young children in their arms. Cultural sensitivity, in such cases, needs to be factored into the message.

“Marisa will provide the Department of Transportation with stats and figures that will allow them to evaluate the effectiveness of their current media campaigns and education programs,” says Jackson. “Millennials are a difficult group as they are tied to their devices, and past methods of altering human behavior are not as effective with this generation. We will be working to assist the DOT in finding an effective way to communicate and influence the most at-risk drivers, which studies show to be drivers 16 to 34 years old and most of the time, male.”

There are many aspects to behavioral analysis when it comes to transportation safety, and the field is facing new challenges all of the time. Among the issues Auguste expects to deal with are the understated role of prescription medications in impacting driver behavior; the increasing number of older drivers on the road; and the ever-advancing technologies in the automobile industry. Each poses a particular concern when it comes to driver behavior and safety.

“The average person, I believe, is not intentionally trying to do something bad,” Auguste says. “I just think people need to be aware. They need to realize how their actions may impact others, and I want to make them aware of that before they injure themselves or someone else.”

A UConn student group is raising awareness about distracted driving through a campaign called “Focus On, Phone Off.” To learn more about the campaign, visit the group’s website.