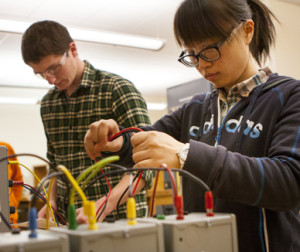 Industry trends strongly influence educational approaches in engineering programs across the country, as universities and colleges strive to ensure their graduates are equipped with the skills and hands-on experiences that will prepare them to succeed in their careers. Two major trends in energy and the power engineering industry are redefining how this important electrical engineering specialty is taught. One revolutionary change is the evolving focus on grid technology paired with investment in sustainable energy technologies that will be needed to replace dwindling fossil fuel reserves. The second trend pertains to the nation’s aging power engineering workforce.

A report emerging from a 2007 National Science Foundation Workshop on the Future Power Engineering Workforce noted that “Based on a survey of U.S. electric utilities, the Center for Energy Workforce Development estimates that approximately 46% of all engineering jobs could become vacant by 2012, due to retirements by the aging workforce and other forms of attrition.” The report called for changes in power engineering education to ensure the sustainability and security of the nation’s energy infrastructure.

In answer to these trends, engineering programs are rethinking how power engineering and electronics are taught, to ensure graduates bring vital skills, knowledge of emerging trends and challenges, and leadership qualities to their careers.  This educational transformation is vital because, for example, it is power electronics – which helps to transfer and control the flow of electricity from an onboard battery to a vehicle’s drive train – that enables energy-conscious drivers to rely on plug-in, hybrid, and full-electric vehicles.

Dr. Ali Bazzi, who joined UConn in the autumn of 2012, is leading UConn’s movement to reinvigorate and modernize power 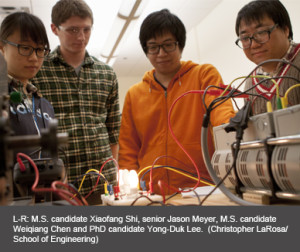 Dr. Bazzi notes that prior to the recent interest in power education, most universities reduced their power-related courses and changed their power engineering curricula to classroom lectures rather than hands-on labs with working equipment. Hands-on labs that enabled students to gain experience with electric machines were uncommon in the electrical engineering paradigm for many years, according to Dr. Bazzi.

But he intends to change that. During the fall 2013 term, he introduced a new elective for Electrical Engineering undergraduate and selected graduate students: ECE 4095/6095: Electric Machines and Drives, which included both lectures and labs and had an enrollment of 27 students.

Before he could teach the lab course, Dr. Bazzi had to equip it, so he campaigned vigorously for financial support and machinery.  The School of Engineering contributed nearly $29,000 to the cause, and the Electrical & Computer Engineering Department contributed another $3,000. Dr. Bazzi invested $3,400 of his start-up funds, awarded as a new faculty member, toward the lab.  Equipment was donated by Yaskawa, the world’s largest electric drives and motion control devices manufacturer, which contributed six 1-HP drives along with engineering expertise: sales engineer and drives specialist Robert Twohill appeared as a guest lecturer for the Electrical Machines and Drives class.

azzi credits TA and master’s degree student Weiqiang Chen with having helped him install the equipment, set up the laboratory and wire basic equipment. Many enclosures were built in-house by UConn’s bio-tech services located at the University’s nearby Depot Campus.

For this first-ever class, Dr. Bazzi also designed, developed and documented in a lab manual 10 experiments covering a variety of applications commonly found in industrial settings. His students not only carried out the experiments, they also provided him valuable feedback enabling him to improve the experimental component of the class and enhance the learning process for the students. Dr. Bazzi also teaches a Power Electronics course and lab, for which he created six new experiments of the 10 covered and wrote a new course lab manual.

Dr. Bazzi has ambitious plans to expand the number of lab benches in his Electric Machines and Drives laboratory to enable up to 36 students to take the elective course, and he expects to introduce graduate students in his spin Modeling and Control of Electric Drives course to some of the experimental apparatuses as well.