The following is reprinted from a news release prepared by the American Society of Mechanical Engineers. 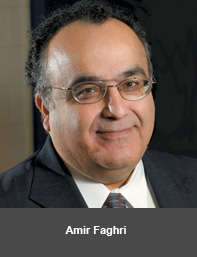 Amir Faghri, Ph.D., a professor of engineering at the University of Connecticut, Storrs, and leading researcher in the field of advanced energy systems, has been honored jointly by the American Society of Mechanical Engineers (ASME) and American Institute of Chemical Engineers (AIChE).

He is the recipient of the Max Jakob Memorial Award for eminent scholarly achievement and distinguished service in the area of heat transfer. Dr. Faghri is cited for extensive, profound and pioneering work in a wide variety of basic and applied problems in thermal-fluids science and engineering and for his distinguished leadership in engineering education as a teacher, mentor, researcher and administrator. The Max Jacob Memorial Award represents the highest honor in the area of heat transfer that ASME and AIChE bestow.

The forty-ninth recipient of the prestigious engineering award since it was established in 1961, Dr. Faghri is the author of four books and more than 300 technical papers and articles on topics ranging from advanced cooling systems to alternative energy. He has made significant fundamental contributions in the field of transport phenomena in multiphase and energy systems, with applications in heat pipes, heat exchangers, energy storage, electronics cooling and fuel cells.

Dr. Faghri joined UConn in 1994, and served as head of the Mechanical Engineering Department until 1998, and the dean of the School of Engineering from 1998-2006. Dr. Faghri has carried out major research programs under contracts and grants from the National Science Foundation, U.S. Department of Energy, National Aeronautics and Space Administration, and other organizations in both government and industry.

His research into forced convection in the presence of phase-change materials laid the ground work for the design of cooling systems used for space exploration and military aviation by NASA and U.S Air Force. He also developed high heat flux miniature heat pipes for commercial cooling of laptop computer chips, which have been a principal contributor to the ubiquitous presence of heat pipes for cooling microprocessors in present-day laptop computers.

Recently, Faghri has been actively involved in passive micro and miniature technologies for energy and thermal systems, which can aid in the development of efficient fuel cells and solar energy power plants.

Among his accomplishments, Faghri is the founder of the Connecticut Global Fuel Cell Center, which has been renamed the Center for Clean Energy Engineering. He is also the recipient of the American Institute of Aeronautics and Astronautics Thermophysics Award in 1988 and ASME James Harry Potter Gold Medal in 2005.

Dr. Faghri earned his M.S. and Ph.D. degrees from the University of California at Berkeley in 1974 and 1976, respectively. He received his B.S. with highest honors from Oregon State University in 1973.

The award is in honor of Max Jakob, a pioneer in the science of heat transfer. It commemorates his outstanding contributions as a scientist, engineer and educator who died in 1955.